What Happened To The Giants of Fairmount Park? 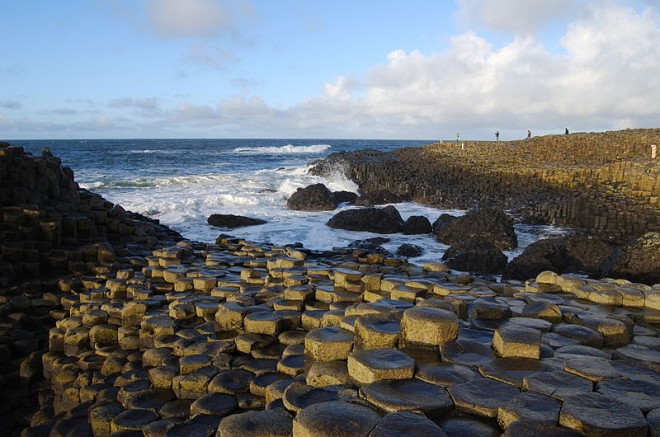 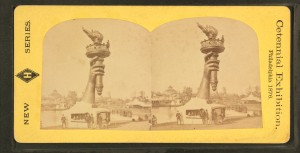 Arm and torch of Bartholdi’s Statue of Liberty at Centennial, 1876 | Image: Robert Dennis collection of stereoscopic images (via WikiCommons)

The lower right arm and torch of Frédéric Auguste Bartholdi’s Statue of liberty (Liberty Enlightening the World) arrived in America for the Centennial International Exhibition world’s fair of 1876. The pieces were dismantled in Paris, crated and shipped across the Atlantic Ocean, then erected at the fair in Fairmount Park under Bartholdi’s supervision. (It was dedicated on Liberty Island, N.Y., in 1886.)

The Centennial, with its main building the largest structure in the world, drew all kinds of monumental items, including the massive Corliss steam engine, and works of art, architecture, and industry from the U.S. and Europe. Among the most interesting was a set of columns of the Giant’s Causeway from the coast of Northern Ireland. While it isn’t certain that the columns were brought to Philadelphia for the Centennial, evidence suggests it is likely.

The Giant’s Causeway is a zone of about 40,000 interlocking basalt pillars that formed as the result of an ancient volcanic eruption. Most of the columns are hexagonal, although there are also some with four, five, seven and eight sides. The tops form stepping stones that lead from the cliff foot and disappear under the sea at the northeast coast of Northern Ireland. Hence, they are reminiscent of a bridge or causeway.

The pillars were created when highly fluid molten basalt intruded through chalk beds to form an extensive lava plateau. Contraction occurred as the lava cooled. Horizontal contraction fractured the lava in a similar way to drying mud, with the cracks propagating downward, leaving closely-packed pillar-like structures. The tallest columns are about 40 feet high. 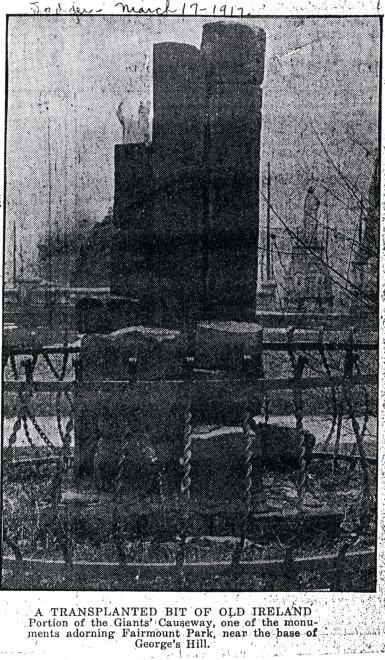 According to Irish legend, the pillars are the remains of a passageway to Scotland built by the Irish giant Fionn mac Cumhaill (Finn MacCool). Fionn accepted a challenge to a fight by the Scottish giant Benandonner and built the causeway across the North Channel so that the two giants could meet. Fionn defeats Benandonner in one version of the story. In another, Fionn realizes that Benandonner is too big for him and hides, having his wife disguise him as a baby. When Benandonner sees the size of the “baby,” he reckons that its father must be a giant among giants. He flees back to Scotland in fright, destroying the causeway behind him. Another story, this one rooted in Irish mythology, posits Fionn mac Cumhaill not as a giant but as a hero with supernatural abilities. The causeway may have been originally associated with the “stepping stones of the Fomhóraigh.” The Fomhóraigh were a race of supernatural beings in Irish mythology who were sometimes described as giants and who may have originally been part of a pre-Christian pantheon.

Evidence suggests that at least one column of this phenomenon of nature may have been moved to West Fairmount Park for the Centennial Exposition of 1876. In her 1892 travelogue Snap Notes of an Eastern Trip, Fannie de C. Miller wrote that she saw a Causeway pillar during her visit through the former fairgrounds: “Here, also, is a basaltic column from the Giant’s Causeway, Ireland, duly inscribed.” But there is no information as to how this particular column got to Philadelphia or what happened to it (or its duly inscribed marker).

To further add to the mystery, the 1922 book Ritttenhouse Square, Past and Present reported that in 1849, Irish textile maker William Divine (1800-1870) bought a four-story house at 18th and Locust Streets that had a garden which eventually had, in the center, “two stones from the Giant’s Causeway.” In addition, some Causeway stones wound up in the collection of the Academy of Natural Sciences along the way.

By about 1901, part of the land containing the Giant’s Causeway fell into the hands of a stone company. The firm made a fortune shipping tons of Causeway pillars to American cities for display. Consequently, in 1907 a consignment of two hundred tons of basaltic columns was shipped to Philadelphia via a White Star freight steamer.

After these Causeway columns were installed in West Fairmount Park, they were noted in several editions of the Descriptive Souvenir of Fairmount Park, Philadelphia, Pa put out by the Fairmount Park Guard Pension Fund Association through the second decade of the 20th Century. An Evening Public Ledger image, dated March 17, 1917, provided to me by the Fairmount Park Historic Resource Archives, shows that the pillars were known well enough for them to appear in newspaper stories. The caption reads: “A Transplanted Bit of Old Ireland—Portion of the Giants’ Causeway, one of the monuments adorning Fairmount Park, near the base of George’s Hill.”

The Fairmount Park Guard Pension Fund books specifically mention that the site of these 1907 columns was a “quarter mile east of [the] Fifty-Second Street entrance [to Fairmount Park], between [the] Catholic Total Abstinence Fountain and [the] West Park guard house.” (The West Park guard house was located northeast of 52nd Street.) The 1917 photo shows the 1907 columns enclosed with a iron fence; figures of the Catholic Total Abstinence Fountain–installed for the Centennial Exhibition–appear in the background. (The top of the statue of Moses peeks over the pillars.) 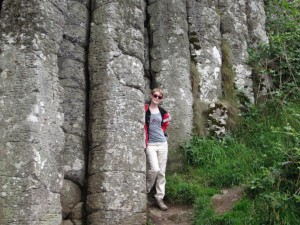 Taken altogether, the place where the 1907 Causeway pillars were located was near George’s Hill, between Centennial Lake and where the Mann Center for the Performing Arts is today, not far from the Avenue of the Republic. They were apparently right along Fountain Avenue, which is, today, an overgrown yet impressive footpath leading from the new Horticultural Center to the Mann Center.

There is no remnant of Philadelphia’s 1907 Causeway columns today. Aerial photos of West Fairmount Park, while not conclusive, indicate that the monument was removed as far back as the 1940s. However, the columns are casually referenced in the 1974 Fairmount Park: A History and a Guidebook, by Esther M. Klein.

The transfer of such large chunks of the Giant’s Causeway to places in America caused widespread indignation in Northern Europe in the early twentieth century. A widely-reproduced Scientific American article in 1908 commented, in relation to the Causeway stones, that “America is fast becoming a great museum and it will be incomplete unless several of the natural as well as the artistic curiosities of Europe are to be found here.” In 1907, the New York Times reported that a Dublin newspaper declared that “the American vandal knows no respect for things or men, ancient buildings, beauty spots or places with historic associations.” (The Irish paper was under the impression that Americans were trying to bring all of the Giant’s Causeway over to America to reconstruct it at some unnamed place. The story, however, was apparently a hoax.) Meanwhile, back in Northern Ireland, the courts ruled that the pillars legally belonged to the stone company that owned the ground, so there was little anyone could do about the sale of the pillars. 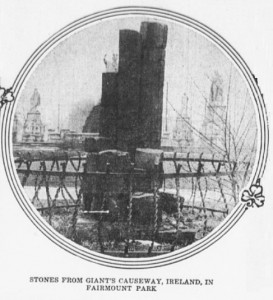 Another photo of the 1907 Irish columns of Philadelphia, from the Evening Public Ledger, March 18, 1915 | Photo: Library of Congress.

But what happened to Philadelphia’s Irish basaltic columns? Besides being valued in Northern Ireland from whence they came, the stone monuments were an interesting piece of Philadelphia’s landscape for at least fifty years. Did the pillars crumble under their own weight in their new yet alien setting? Or were they removed by some unfeeling contractor who did not appreciate their history and status? Or were they carefully moved, for preservation purposes, to other parts of the city (and beyond)? Are any of the Giant’s Causeway of Philly still around?

When I wrote about the long-gone Indian Pole and the mermaids along Penn’s Landing, I raised comparable questions. The sudden removal of public monuments and works of art always leaves a small void in the history of a city that, along with other instances, winds up being a sort of death by a thousand cuts. Philadelphia has been the scene of many such stories.