The Smoky Haze Of History At McGlinchey’s 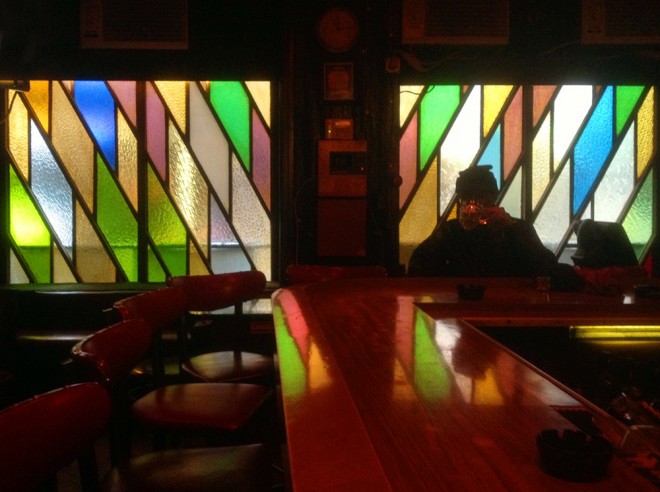 Oh, McGlinchey’s. So many fond memories of this place dating back to my first days as a Philadelphian. Whenever I mention this fine establishment to anyone, I instantly get negative comments about it being a “dive bar,” or the cigarette smoke, or the notoriously surly staff, or the heavily-tagged bathroom. To me, that’s what a bar is supposed to be. From that first night in 2003, when a rock flew by my head, having just been hurled through the front window from the outside, I knew that this was my kind of place. Even today, I look at the featureless, translucent white, parellelogram-shaped window pane that replaced the colored textured one that had been broken that night, and have warm feelings. 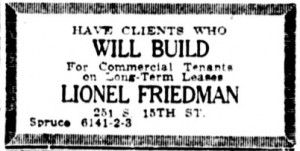 1922 Ad for the Lionel Friedman Company | Source: Library of Congress

The building McGlinchey’s has inhabited in one form or another for the last 76 years, 259-261 South 15th Street, was the brainchild of one Lionel Friedman. The Lionel Friedman Company was a major real estate broker in the early 20th Century whose first office was located in a long gone rowhouse at 251 South 15th Street. A few doors down the same row, at 259 and 261 South 15th Street, stood two dilapidated houses that had been unoccupied for the previous two decades. Their latest occupants were the home and office of obstetrician Dr. Stricker Coles.

In 1921, Friedman purchased the abandoned properties, demolished them, and commissioned the firm of Hoffman-Henon (who would design the Boyd Theatre later that decade) to design a speculative three-story, 5,000 square foot, $25,000 office building for the 32′ x 60′ plot of land. By the end of 1922, work by the Kober Construction Company was complete. For an office building no larger than the two rowhouses that it replaced, the façade is quite exhilarating. Each one of the 10 windows facing 15th Street is topped with fancy brickwork and a keystone. The second floor windows each have an arch with medallions in between. Both doorways are embellished with intricate mini-porticos and the fine cornice up top really pulls it all together.

The building’s first tenant, and the only one to make use of the entire building, was the Allen-Sherman-Hoff Company, an industrial concern which developed and manufactured ash handling systems, equipment, and parts. Formed in 1921, the last names of the Frank Allen, Max Sherman, and Leigh Hoff formed a convenient acronym centered around their business: ASH. In fact, their slogan was “Our Name Is Our Business.” From 259-261 South 15th Street, Allen-Sherman-Hoff managed their manufacturing plant in Hamburg, PA and invented new ash handling devices like the Hydro-Seal and the Hydrovac.

While Allen-Sherman-Hoff stayed in the building until moving to Wynnewood in the early 1950s, they ceded the ground floor and second floor spaces to commercial use and consolidated themselves into the third floor around 1934. (This may have had something to do with Lionel Friedman wanting to take advantage of the end of prohibition.) By that point, they also had offices in the building next door (now Latimer Deli). Allen-Sherman-Hoff is still in business as the ash-handling subsidiary of Diamond Power International and is now based in Exton.

On October 1st, 1935, the ground floor space received its first tenant: the Odd Book Shop. Little is known about this business beyond, probably, some odd books. They later changed their name to the Odd Shop and expanded their products to include porcelains, glass, prints, paintings, and decorations.

By 1937, Lionel Friedman’s real estate company had grown to immense proportions. His office now in the Lewis Tower (today Aria Condo), and having developed and built most of the buildings on this stretch of 15th Street, Friedman pursued the greener pastures of suburban strip malls and sold 259-261 South 15th Street. Friedman would grow his company even further and become a philanthropist focused on Jewish causes: he organized the Philadelphia chapter of the American Council for Judaism, was President of the Board of Trustees of both Rodeph Shalom Synagogue and the Jewish Seaside Home for Invalids, Vice-President of the Jewish Publication Society of America, and was a founding member of what is now called the Jewish Employment and Vocational Service. His real estate company, through a series of mergers and acquisitions, still lives on as the Pennsylvania Real Estate Investment Trust (whose offices are a block away on Broad Street).

The new owner, a Mr. McGlinchey, let the Odd Shop stick around on the ground floor space while opening an eating establishment on the second floor called McGlinchey’s Restaurant. Though the Odd Shop moved to 1721 Chestnut in 1940 (only to move back to 15th Street a decade later), McGlinchey’s Restaurant stayed on the second floor until at least 1949. However, by the 1950s, the bar we all know and love was definitely inhabiting the first floor space while Mr. McGlinchey and his family resided on the second and third floor, which they had converted into an apartment. The McGlincheys lived up there until 1968, when one Henry Sokol purchased both the building and the establishment. His descendants still own the building and manage the bar to this day.

“1922? I thought the building was a lot older than that!” exclaims Henry’s son, Sheldon, one of the current owners of McGlinchey’s, when I showed him the building’s construction announcement from Volume 28 of the American Contractor. He explained to me how contractors working in the basement of the building had told him that the beams and other structural features of the basement had to pre-date the Civil War. Could Lionel Friedman have re-used the foundation of the circa 1830s rowhouses that once stood here? 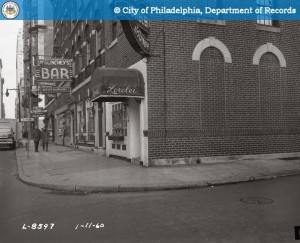 Mr. Sokol also went on to explain how some parts of the building still carry clues toward its history. A dumbwaiter still exists behind one of the mirrors along the bar’s southern wall. Remains of doors that lead to the building next door (Jose Pistola’s) are still visible on the unused third floor. He thinks they may have been used by an old laundry service. Though the bar has changed little since the ’60s, the Sokols have made adjustments along the way to follow the changing times. In 1976, the second floor space was converted back into commercial use, opening as a dining room called Top’s Bar. It became a disco in the late 70s and moved on to hosting live music acts in the 1980s. Poetry readings also became a common use of the Top’s Bar until moving to the recently-lost Robin’s Book Store. Today, Top’s lives as an extension of McGlinchey’s itself.

Among McGlinchey’s many unique features, the one thing that gets mentioned most to me about this bar is the large, faded mural on the northern wall depicting a hunter placing a duck decoy. Why is it there? Where did it come from? What the hell does this image have to do with this bar?

Mr. Sokol explained to me that McGlinchey’s was once the lunchtime hotspot for workers of the Atlantic-Richfield Company, whose East Coast operations were based at the Atlantic Building at Broad and Spuce nearby. These employees would exit through the back door of their building and walk along the 1400 block of Manning Street (now Bach Place), take a right in the alley behind the 15th Street corridor and enter McGlinchey’s through the back door. These workers were so appreciative of McGlinchey’s service to their company over those years that they gave them two of their billboards from an advertising campaign. 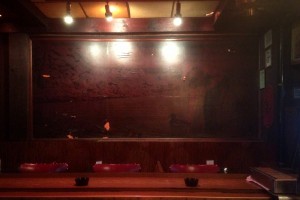 This campaign, meant to be displayed in the densest parts of cities, depicted bucolic outdoor scenes at Atlantic Richfield (a.k.a. ARCO) gas stations, encouraging the viewer to drive out to these types of places using their gasoline. The two billboards given to McGlinchey’s depicted a hunter on one and a fisherman on the other. The fisherman billboard was once on the eastern section on the northern wall, while the hunter billboard still survives on the western section.

“I’ve tried to get it restored, but it’s too far gone,” lamented Mr. Sokol when I inquired about it. These thin paper billboards were meant to be pasted up on outdoor walls and were never meant to be displayed for more than 6 months at a time. Five decades of wear, tear, and cigarette smoke have reduced the hunter billboard to an orange-brown shadow of its former self that is barely visible when the lights are dimmed in the bar at night. It’s possible that it’s the last Atlantic-Richfield hunter billboard in existence, or at least on display.

McGlinchey’s lives today not only as the agent of preservation of a 1920s office building, but more importantly as the agent of preservation of the kind of establishments Center City once had in abundance. Few peers resemble the type of bar that used to inhabit big city downtowns across America before the influences of a less rugged, more effete patron prettied up the world of bars and restaurants. Truly, McGlinchey’s is an American treasure.

Check out Google’s 360-degree “Inside Street View” of the bar from February 2013 here.