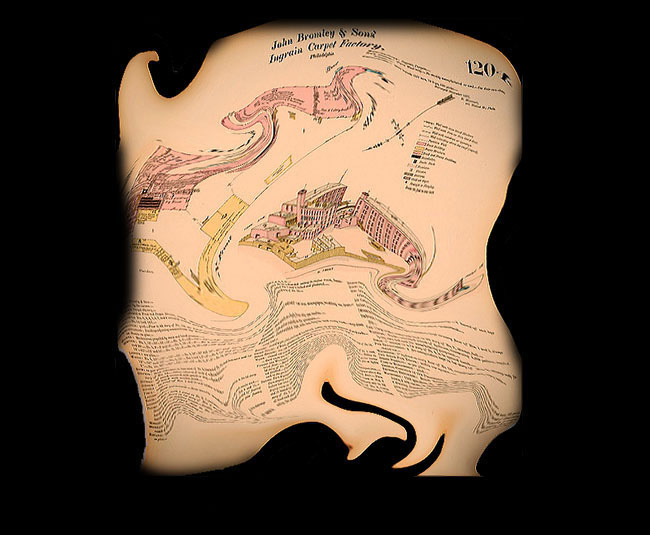 The old joke of developing natural lands into towns and cities is that we chop down trees, lay down the asphalt, and then name the street after the trees that used to be there. Growing up in the suburbs, we had the same joke. A developer would by a defunct piece of land that was once in agricultural use, build a bunch of homes and then name the development something depressingly apropos like Spring Meadow Farms or Sweet Valley Orchards. Although people view the historical architecture of Philadelphia as an escape from this profit-driven perversion of our cultural heritage, it’s hard not to feel a twinge of hypocrisy when a new loft development in a defunct factory is named after the industrial activity that used to occupy the building.

After explaining this witty analysis to Philadelphia artist Maria Möller, she just gave a light shrug and said, “Well, we aren’t manufacturing things anymore, so sometimes housing is the only option for these buildings. It’s better than tearing them down.”

Maria is the creator of the Hexamer Redux project, which uses historical fire insurance surveys conducted by the Hexamer Company in the mid to late 19th century to resurvey what the building, or in many cases vacant land, is now being used for. To further dispel my point, Möller explained a project she undertook a few months ago in the Point Breeze neighborhood.

For this project, The House That Was Here, Maria studied Census records and business directories to trace everyone who had ever lived at 2025 Federal Street, now a vacant lot. Once she found the information, she constructed five miniature sculptures of row homes and posted them on the site. On four of the row homes were the names of every family member from the four separate families that occupied the house according to records. Maria then invited residents of Point Breeze to cover the fifth row home sculpture with their thoughts, hopes and visions for the neighborhood. Although the address still has no house or residents, Maria’s intent was to explore the rich history of the people who lived, worked and died on what is now just a vacant lot.

“This project was about neighborhood history and neighborhood change. I feel that it’s important to recognize the history of a place even if there isn’t apparent history because that’s really what’s informing what’s going on today, and some of the tensions in a place like Point Breeze that’s sort of getting gentrified by all ends, sometimes in just a blink of an eye, and affecting the residents who have a history in that neighborhood.”

Although there’s always an inherent risk of accuracy and perspective when exploring the history of a place and people, Maria was very pleased with the neighborhood response and the other stories that came out of the project. For her next series of projects, Maria was drawn to Kensington, where there is such a strong sense of history. Maria has long been fascinated by the desire to connect with the history of the neighborhood by the long-time and newer residents alike. In her opinion, people are drawn to the neighborhood for the old buildings and the feeling of something tangible that is born from an industrial past. In her words, it’s that “sheen” that the buildings have that make the place so special.

When asked to describe what she meant by sheen, she explained, “It’s that feeling of the grease, and bricks and the wood. It’s the feeling of use.”

This curiosity of the history and use of buildings led Maria to the Crane Arts building, where she explored the Kensington Riots of 1844 with co-collaborator and Philadelphia artist Jebney Lewis. Before the Crane Company Building was built in 1905, and even before the city’s consolidation in 1854, this was the site of venomous violence against newly immigrated Irish Catholics. Maria and Jebney worked with Palestinian youth from the Arab-American Community Development Corporation to create a six-week installation in which the group used photography, theatre, and sculpture to reclaim and explore the site where the riots occurred, and how similar oppression still takes place around the world.

Aside from the value of the project, and the deepening of Maria’s reverence for the rich history of Kensington, working with Jebney Lewis was the genesis for the Hexamer Redux project. It was Jebney who first introduced Maria to the Hexamer Surveys by showing her the survey on the Philly Geo History website former Joseph Johnson & Co. Morocco Factory building on Mascher and Jefferson Streets in Kensington while the two were working in the building’s basement, where Jeb had set up a work studio. Maria was impressed by the high artistic quality of the survey and the attention to detail, as well as the vast catalog of buildings that the Hexamer Surveys covered. As Maria explained, the surveys may have been created for the functional purpose of assessing fire risk and insurance, but the creator Ernest Hexamer was actually a highly skilled artist from Germany. According to Maria’s research, Hexamer was active in the March Revolution in 1848. After going into exile due to the uprising, he started working for a mapmaker who encouraged him to come to Philadelphia to make maps. After beginning work on surveys, Hexamer incorporated the high artistry and precision of mapmaking, which was common at the time. 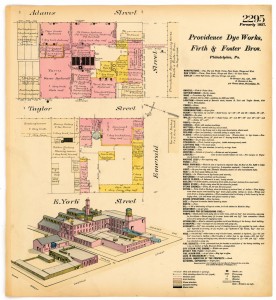 It was also impactful to connect with the original layout of a building Maria was actually working in. Then one day an idea came to her, like most great ideas do, right after a nap. She decided that she wanted to resurvey the buildings on the PhilaGeoHistory database using the original Hexamer Surveys as a starting point.

After receiving funding from the Pew Center for Arts and Heritage through a Triple I Award, Maria selected The Providence Dye Works building as her first survey. First built in 1875 at Emerald and York Streets in Kensington by the Firth and Foster Company, the original factory existed on two adjacent lots on opposite sides of the street with a connecting skywalk over Emerald Street. The one lot is now Paretta’s Automotive Repair and the other lot is a vacant mega-lot overgrown with weeds and trash.

A large part of the Hexamer Redux project’s purpose is to not only connect residents and participants with what was once there, but also with what the new sites could be. A few years ago, Maria had taken part in the Murals Arts Program’s project “My North Philly.” While collecting oral histories from residents to be used in murals, Maria met Marietta Wilson, a long time Kensington resident, who as Maria put it, “lived, worked, and died within a few square blocks”. Ms. Wilson briefly worked in a dye works in the neighborhood and told Maria of the horrid conditions of walking over boards where a mixture of water and toxic chemicals would pool beneath her feet. When taking her first site visit, Maria noticed pools of water on the site, but instead of chemicals the water was mixed with the weeds that had taken over the site. Maria knew she wanted to do something with the weeds and the dye, and it made her wonder, “Could you dye with the weeds, and even more, could we survey what the weeds are?”

This question led her to natural dyers Mira Adornetto and Elissa Meyers of BLUEREDYELLOW, a company that uses herbs grown on city lots to make dyes, and botanist Zya S. Levy of the We The Weeds, which connects urban people to herbs through art installations (including Ruins at High Battery at the 2013 Hidden City Festival). Through their collaboration, they organized an art exhibition on October 19th where community members were invited to resurvey the weeds on the site to catalog which plants could produce dye, create dye on site, and then use that dye on fabric and yarn. Aside from learning that Mugwort dye created such a brilliant greenish gold color, Maria was pleased that the exhibition brought together an interesting cross section of people who all wanted to take part in the conversation: those interested in weeds, those interested in history, those interested in urban redevelopment, and those interested in a mixture of all three. 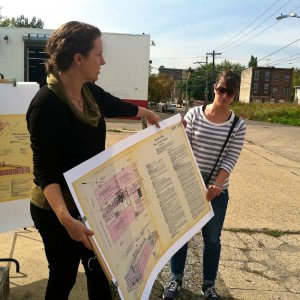 The next exhibition will take place in what was once Arrott’s Mill, and what is now Viking Mills Art Studios in late winter/early spring. After meeting textile artist Andrew Dahlgren during the Hidden City Festival at his Knit Lab project in the Shivtei Yeshuron-Ezras Israel in South Philadelphia, Maria invited Dahlgren to collaborate on the Arrott Mills Survey, which they have appropriately named “Hexamer:Knitlab.” For one day, participants will be invited into the Viking Mills Building to resurvey the building using mechanical knitting machines to reimagine the industry that once existed inside the walls. Maria connects the new Viking Mills to the original Arrott’s Mill by explaining that William Arrott had his business, but he also had other tenants–what Maria calls “the original coworking”, and connects to the coworking that takes place at Viking Mills.

For each exhibition Maria also plans to create her own version of a Hexamer Survey using the original artistic aesthetic and attention to detail of Ernest Hexamer to survey what is on the site now, and what uses were imagined and reimagined for the space. Her summer plans are to take on the Bromley Ingrain Carpet Factory, which led her to say with a grin, “Who knows, maybe they’ll be a big survey canvasing the parking lot of Comly Auctioneers (a business nearby the Bromley).”

But for now, Maria is proud of the conversation Hexamer Redux has provoked, and she has an expansive vision for the art the project can create. Picking up on my opening point of buildings that once served a tangible use now being turned into lofts, Maria provides this balanced view of the past and present that her project invokes.

“The interesting thing to me about the mega-lots are when you stand on the corner and you begin to think about what this was all like when these were all working factories and what that meant for how many people lived here, and for how many jobs there were, but what it also meant for how much dirt, and smog, and chemicals were everywhere. Being able to visualize that makes you realize that it was really good in so many ways, but so hazardous in another.”

Acknowledging the excitement over Kensington’s present redevelopment, she further explains, “The men who were designing these factories and this equipment were really on the forefront of technology. And for the people around them, even if life was hard and they were just cogs in the wheel, it was still a great time of promise, and knowing that they were part of something really big. So for the people who want the mega-lot where Providence once stood to now be a park or something great for the community, it’s important to know that history.”