In The Grand Tradition: The Wanamaker Organ At Christmas 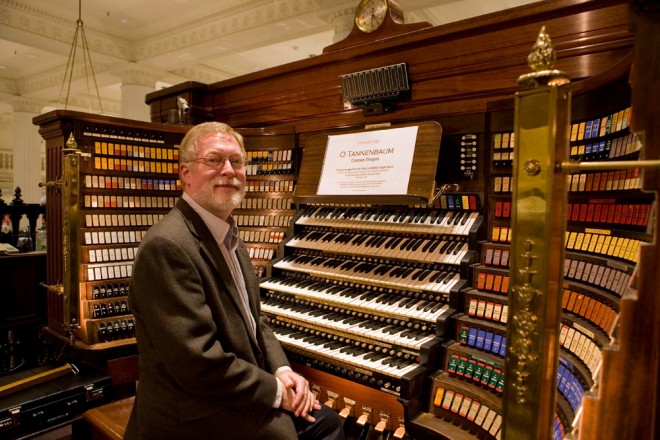 While editing a story for the Hidden City Daily on a recent weekday morning at the Last Drop Coffee House, I ran into photographer/champion for social change Zoe Strauss and art consultant/former director of the RDA’s Percent for Art program Susan Miller Davis. As I sat down with a refill, the gentleman next to me struck up a conversation about writing and the arts. Turns out Wesley Parrott knows a little about both. 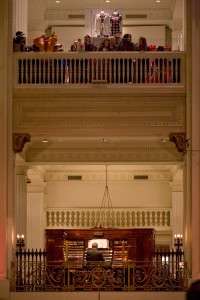 Wesley Parrott performs on the Wanamaker Organ during the Christmas Pageant of Lights | Photo: Bradley Maule

As its former president, Wesley oversaw the Franklin Inn Club, which has called Camac Street home for over 100 years. For years, it was a literary-centered club whose membership required publication of a book, but more recently the range has expanded to include visual arts, science, and other learned disciplines. Its historical roll call includes Bertram Lippincott, Owen Wister, and N.C. Wyeth among the Innmates.

As a student at the Curtis Institute of Music in the 1960s, the young organist Wesley Parrott was taken by Philadelphia—especially by the famous pipe organ at the John Wanamaker store, now Macy’s. Grand Court Organist Peter Conte—only the fourth person to hold that title in the 102 years since the organ was installed by Rodman Wanamaker, John’s son—coordinates the schedules that allow various organists to perform on the instrument, the largest of its kind in the world.

I won’t profess to know much about pipe organs, but I know a good groove when I hear it. Two Saturdays ago, I felt such a groove—literally, you can feel the music because the organ is loud— as Wesley’s guest at the Wanamaker Organ. With hundreds of onlookers gathered around the eagle below and from the balconies in the departments above, he accompanied the Christmas light show, crescendoing with “O Tannenbaum,” to much applause.

The light show runs through December 31st every two hours from 10AM to 8PM. But the 45-minute organ recitals, some of which accompany the light display, are every day, year-round. Learn more about the history of the Wanamaker Organ and check the schedule HERE. For an extensive history on the Wanamaker Building, check out Shadowbat’s feature for Hidden City HERE.

These photos were taken Saturday, December 7th. Click any photo to launch the gallery.