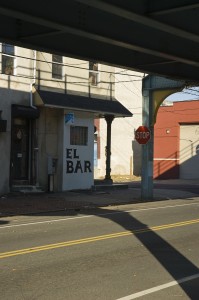 When an elevated train rolls through Kensington you not only hear its low rumble, you can feel it. Windowpanes rattle. Streetlights flicker. During peak hours a Market-Frankford train passes every four minutes, punctuating conversations in its wake. The El’s imposition on the visual landscape is as daunting, its studded steel support beams straddling either side of the street like a thousand-legged Behemoth overwhelming anything in its way.

In fact, even in the best of times it isn’t easy to live or do business under the El. But five decades of economic decline has only heightened the destructive impact of the train line. Between Girard and York along Front Street–and certainly well beyond there along Frankford Avenue–there are nearly as many vacant lots as there are active business operations, used car lots, and row houses.

Yet the El is also convenient. A decade or so after the difficult rebuilding of tracks and stations was completed, it is a critical asset to the mending river ward neighborhoods it passes through. Service is improved, ridership is up, and certain stations–notably Girard and Berks–have become vital neighborhood hubs. Developers are beginning to respond to the reversal of fortune: what was seen as repellant is now attracting eyes, investment, and new ideas. And for their part, Kensington civic groups would like to see Front Street under the El flourish as a commercial corridor while retaining some of the factory neighborhood’s historic feel.

Recently, a few of these developers have teamed with architects on the vanguard of sustainable, place-making design to begin shaping some of the rugged real estate. In 2009, the Philadelphia School District enlisted SMP and SMK Architects to design the handsome LEED Platinum-certified Kensington High School for the Creative and Performing Arts at Front and Norris Streets, by the Berks station. This month, the developer Peter Crawford and Interface Studio Architects revealed a striking design for a four-story mixed-use building near Front and Master. 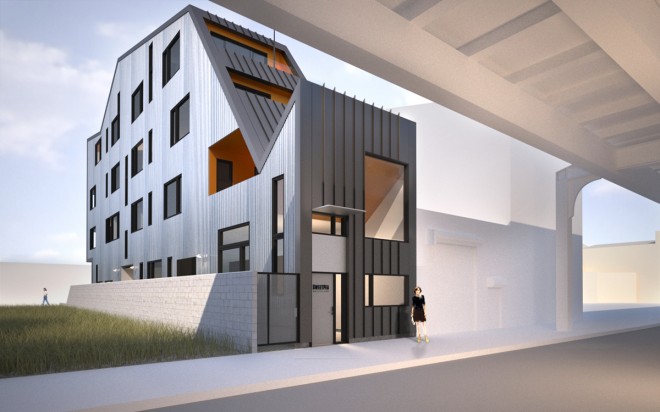 Both these projects demonstrate that building in the shadow of the El presents challenges and necessitates inventive design approaches as well as sensitivity to context. Several other projects that have been proposed or are in the works fail this test, though not for lack of public engagement. Examples of unremarkable projects include the Tower Investment’s 30 townhouse development at Front and Girard on the border of Northern Liberties and Kensington, and the now canceled low-income residential development that would have replaced two historic textile industry banks at Front and Norris Streets. In both of these cases a neighborhood group—the Northern Liberties Neighborhood Association and the East Kensington Neighbors Association, respectively—intervened to foster a better outcome (the future of the Front and Norris banks remains uncertain as the Norris Square Civic Association reviews a new set of proposals for the site). 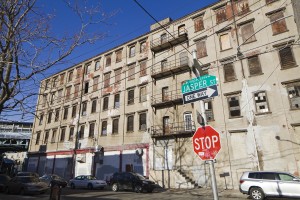 A further challenge is what to do with the remaining textile mills whose workers the El once served. While adaptive reuse projects have not kept pace with the alarming rate at which fires have destroyed so many of these factories, a handful of former factories have been, or are in the process of being repurposed.

At Front and Master, the Mulherin’s Sons building has seen slow motion renovations–and a change of owners–over the last few years. Eventually, the former whiskey distillery will house a ground floor café or restaurant, as indicated by the orange liquor license in the window, and residential units on the upper floors. It has lost none of its historic character, retaining its high arched windows and much of the handsome woodwork within.

At Front and Palmer a former barrel factory was converted into an industrial chic catering hall, complete with 35 foot ceilings, exposed beams and chandeliers made from repurposed bedsprings.

As Hidden City’s Nic Esposito reported earlier this year, the original Bromley carpet mill adjacent to the York-Dauphin El stop will be converted to mixed use apartments and retail, if its owner Jesse Muñoz has his way. Muñoz’s plan for the historic mill–a progenitor of Kensington’s textile economy–however is still a long way from coming to fruition. The response from the EKNA has been lukewarm, as neighbors question Muñoz’s capacity to meet the design challenges of building apartments smack up against the El.

Muñoz could learn a thing or two from Interface Studio Architects, the boutique firm with an appetite for tight constraints, whose design for Peter Crawford’s four story mixed-use building will feel like an organic response to the environment. ISA cut its teeth on the 100K house, a proof of concept that green home building can be done cost effectively–the single-family prefab house cost around $100,000 to construct and is LEED Platinum certified. The mixed-use building will include two stories of offices or another commercial use, coming nearly level with the elevated tracks before plunging downward at an acute angle and sloping back up and away, with terraces embedded in the sloped, metal-faced wall. Double stud wall construction, a tight building envelope, and triple-glazed windows will help abate noise from the El, improving the building’s energy performance as well. 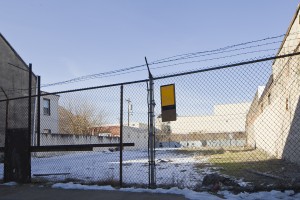 ISA’s principal architect Brian Phillips says such an approach, including double stud construction and careful air sealing “can be done at a reasonable cost.” However, at the hearing earlier this month where officials from the City’s Zoning Board of Adjustment approved the project, the developer’s team argued successfully that the costs associated with building desirable residential units next to the El constituted a hardship, meriting the zoning variances they requested.

At that same zoning hearing, another developer made a similar appeal for hardship. Her plan for a project near Front and Montgomery called for six brick-faced townhouses divided into triplexes, with no commercial use and parking in the rear. Other than setting the houses back 20 feet from the curb, the developer did not propose any additional noise abatement measures.

This proposal has the advantage of filling in a half-empty row of row houses and stores, adding eyes on the street across from the Kensington High School for the Creative and Performing Arts. But it was not clear from the developer’s presentation how the units would be priced or to whom they would be marketed (a decision on the project was held by the ZBA pending some missing paperwork). In fact, the question of the market for residential units under the El afflicts both these new construction proposals and Muñoz’s plan for adaptive reuse of the Bromley Mill.

Chris Somers, a realtor who works largely in Fishtown and Kensington, says most people would rather live a few blocks to the east or west of Front Street, benefiting from proximity to mass-transit without the noise and “stigma” associated with the El. Somers recently marketed Norris Point, a ten unit townhouse development, incidentally designed by ISA, on a relatively quiet block a short walk from the Berks station. But he also says that innovative projects like Crawford’s will lead to more infill development. For now, residential units are a risky proposition, and easier to rent than sell. 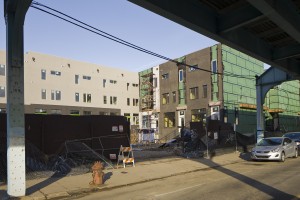 One El stop south, at Front Street and Girard Avenue, a large-scale residential development designed by JKR Partners may be an indication that the stigma associated with living under the El is dissipating. The fire last July that destroyed the L.H. Parke coffee roastery cleared the way for Bart Blatstein’s Tower Investments to build 30 townhouses and mixed-use buildings there. One row of houses, framed and sheathed at the time of this writing, will front on Hope Street. Another row of mixed-use buildings with commercial space, not yet begun, will press up against the El.

JKR Partners’ residential projects tend to be self-contained, sometimes gated, and they usually provide one-to-one parking. Despite the proximity to the El, this project will unfortunately not depart from that scheme; parking will be placed in the center of the parcel, surrounded by the residential and commercial buildings. But had it not been for the NLNA’s input, it’s likely the project would have been even less responsive to the site than it is. The civic group recommended the mixed-use side of the project maintain an industrial look, a nod to place, and take the El into account. JKR Partners returned with a design that moves the hallways to the east side of the 10 mixed-use buildings facing the El, creating a buffer for the living spaces further in.

Lauren Eckberg, the architect on this phase of the project, says she is still mulling noise abatement approaches for those buildings. 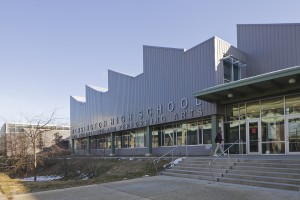 The standard for context-sensitive, energy efficient design along the Market-Frankford line was established with the construction of the Kensington High School for the Creative and Performing Arts at Front and Berks. The school’s large, double-glazed windows allow for ample daytime lighting. None of the windows face the El, a good portion of the building is set back from the curb, and classrooms are situated in the rear of the building, a design strategy that–to be fair–would not work for a mixed-use project with retail offerings.

But it is the building’s energy efficient envelope that really keeps out the noise. “Something goes by every two minutes. Before the building was sealed it was so loud,” says Jane Rath, SMP’s lead architect. “People don’t really notice it now.” Moreover, the laminated glass that the School District requires for safety, performs better at noise abatement than double-glazed windows alone would have. “There was no way we could ignore the El,” Rath says.

Map of current, ongoing, and planned developments under the el.