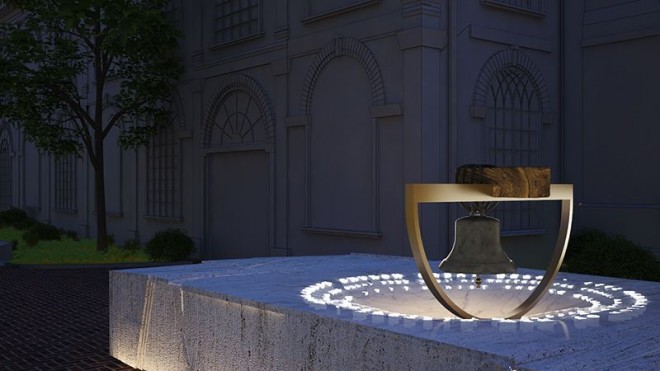 The Great Bell in its proposed location in the Christ Church garden | Image: Moto Designshop

Perhaps the oldest surviving bell in North America, the Great Bell of Christ Church, will get a new interpretive display in 2014, designed by Moto Designshop of Old City. The 1702 bell, which was cast at Whitechapel Foundry in London (where the Liberty Bell was cast 50 years later) hung from a small belfry at the original wooden Christ Church until it was replaced in 1755. The 350 pound bronze tenor bell ought not be touched, according to metallurgical experts, but can be safely rung. Church officials hope the new display will be ready by July 4. “The point [of the design] was to make it elegant without getting in [the bell’s] way–to express the bell simply and openly and allow its ring to be heard,” says Roman Torres, of Moto Designshop. “The bowl at the center is serves to amplify the sound of what should always be a gentle ring.”

The display will mark the end of a long journey for the bell, which was given to St. Peter’s Church in the mid-18th century then hung at the Christ Church Hospital for Indigent Women nearby Christ Church on Cherry Street, and then at at the Kearsley Home until 2011.

The new display allows the bell to be accessible in a public place–the northwest section of the Christ Church garden, near Second and Church Streets, “a tangible and approachable record of history,” according to a press release. And it’s filled with symbolic meaning, connecting the history of the church, the birthplace of the Episcopal Church in America, to the American Revolution and the founding of a new nation based on religious liberty. “We approached the plinth as a metaphorical timeline upon which the Bell expresses influence,” says Torres. “The finish of the marble at one end is rough, to represent the turmoil of pre-war. As it approaches the center of the Bell, the finish and surface become honed to a polish to express the Bell’s role in the birth of a nation. As it moves to the other end, the surface become rough again representing a future unknown.”

From a practical standpoint, the plinth is also designed to allow the bell to be displayed in open air without being touched. Moto’s designers were influential in convincing church officials to display the bell in open air, without the protection of a structure.

The church was founded in 1695 by Anglicans of the Church of England who set up a small wooden place of worship on Second Street. The Great Bell was hung outside the church in the notch of a tree. The existence of the church, allowed for in Quaker William Penn’s charter for Pennsylvania, confirmed that the new colony would be a place of religious liberty. In 1727, officials of the growing church began construction on a new and much more sumptuous building, which was complete in 1744. A superb example of Georgian architecture and a monument to colonial craftsmanship, it’s widely considered one of the great buildings of the 18th century. 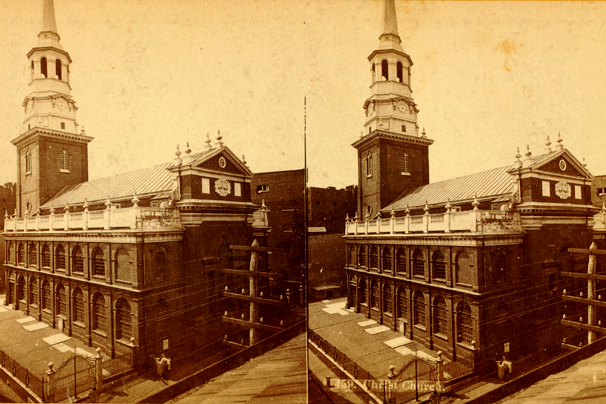 Church officials began raising money for a steeple, a project taken up by Benjamin Franklin and other leading Philadelphians, who ran two lotteries in support of what would be the tallest tower in North America. The slim white tower was built by Robert Smith and finished in 1755, when bells from Great Britain were installed. It pierced the sky at 196 feet high and was the tallest structure in North America for almost one hundred years. John Adams wrote in his diary of climbing the tower’s ladders to gaze upon the new nation in 1776. 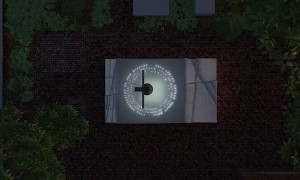 View of the bell and plinth | Image: Moto Designshop

The Revolution cut Christ Church’s ties with Britain and the Anglican Church and forced the creation of the Episcopal Church in America. “The idea of religious liberty is very much intertwined with the design,” says Torres. “The dual history of this artifact really came together for us when we started to think about what the Bell represented to both sides: tolerance, liberty and unbridled optimism for a future unknown. We felt it important to embody these ideals and display the bell as openly and freely as possible.”