Finding Sanctuary In A Converted Church 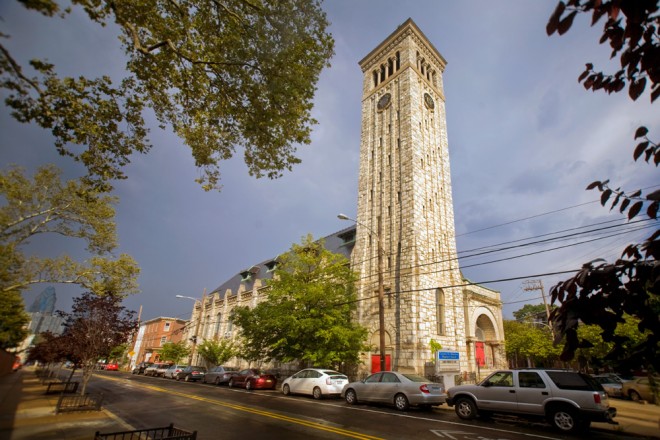 The former Greater St. Matthew Baptist Church in South Philadelphia is gearing up for renovation as developers move forward with a residential conversion. Developer Alon Barzilay is planning 30 apartments for the church, located on Grays Ferry Avenue in the Graduate Hospital neighborhood, and an additional eight in the rectory next door on Fitzwater Street. Architect Peter Lazor designed the plans for the project, to be called Sanctuary Lofts.

Reached by email, Barzilay declined to comment on the status of the project or its timeline for completion. However, excavation activity at the site was visible beginning the week before Thanksgiving, and L&I records indicate a “major alteration” permit was issued October 30 and updated November 20, to allow the 30-unit conversion of the church. The language of the permit states that separate permits are required for mechanical, electrical, plumbing, and fire suppression work.

The development sparked controversy when it was proposed to the community last year because of its residential density and the fact that it included no accommodations for off-street parking. At the same time, it received strong support from former congregants who wished to see the church live on. 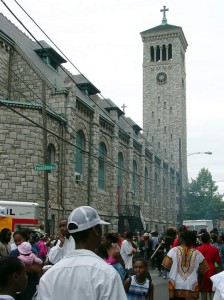 The smell of oxtail and grilled corn fill the air outside the former Greater St. Matthew at Odunde | Photo: Bradley Maule

“I think, first and foremost, this proposal was universally acknowledged as a strong and very thorough preservation effort,” said Andrew Dalzell, programs coordinator for the South of South Neighborhood Association (SOSNA).

Erected in 1892, the church was the home of the St. Anthony of Padua Roman Catholic parish until its closing by the Archdiocese of Philadelphia in 1999. Designed by Frank Rushmore Watson, the church is easily recognized for its variegated stone masonry and its 128-foot clock tower rising over the neighborhood.

The Greater St. Matthew congregation, which then took ownership from the Archdiocese, listed the church for sale in August 2011, partly because of declining attendance caused by parking conflicts with neighbors and city officials. The sale to Barzilay closed in February 2012 for $2 million.

After his initial presentation to SOSNA, Barzilay revised his plans to address community concerns, but maintained that adding a parking garage would compromise the historic character of the structure and the overall viability of the project. He also indicated a willingness to formally protect the church through a preservation easement or a nomination to the Philadelphia Register of Historic Places. (SOSNA had begun a nomination for the property, but held back at the request of Greater St. Matthew’s pastor because of the potential “red tape” it would put on the transaction, Dalzell said.)

The revised proposal in April included up-lighting to illuminate the church tower and elevator and stair access within it, relocated HVAC units, elevated balconies to the third-story level of the church’s façade, and elimination of all but one apartment less than 500 square feet. The church apartments are spread across four stories: two floors of one-story units, with two-story lofts above.

SOSNA’s Zoning Committee voted 7-0 in favor, while the vote from neighbors went 18-30 in opposition, including a unanimous vote against from 18 near-neighbors. Because of the split, SOSNA deferred to the judgment of the Zoning Board of Adjustment rather than submit a formal letter in support or opposition. 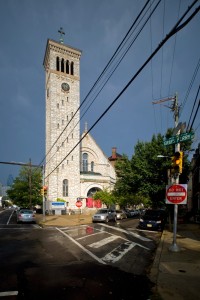 The 128′ clock tower is a landmark of the neighborhood; the developer has not revealed his plans for it yet | Photo: Bradley Maule

The divide over density between long-time residents and younger newcomers will no doubt continue as the neighborhood develops. It was on display at yesterday’s ZBA hearing for 2300 South Street, where a four-story building with 18 apartments, first-floor retail space and no off-street parking is being proposed. The three-hour hearing concluded without a decision, which the ZBA will announce at a later date.

Although parking issues were a big concern during the zoning process for Greater St. Matthew, “they are water under the bridge now,” said Dalzell, as the ZBA ultimately granted the variance in June 2012 and no appeal of its decision was ever lodged. He also noted that L&I’s zoning refusals, which trigger the need for a variance, pertained only to the zoning of the rectory as multi-unit, not to the 30 units proposed for the church building or to the lack of parking spaces.

The real victory, he said, is the preservation of a landmark religious property at a time when many around the city, including in the same neighborhood, have been lost or remain vulnerable.

“We are happy that developers came along who were serious about reusing the church and we’re hoping for its success,” Dalzell said.