Encore At Kelly Natatorium: One Night Only (For Now?) 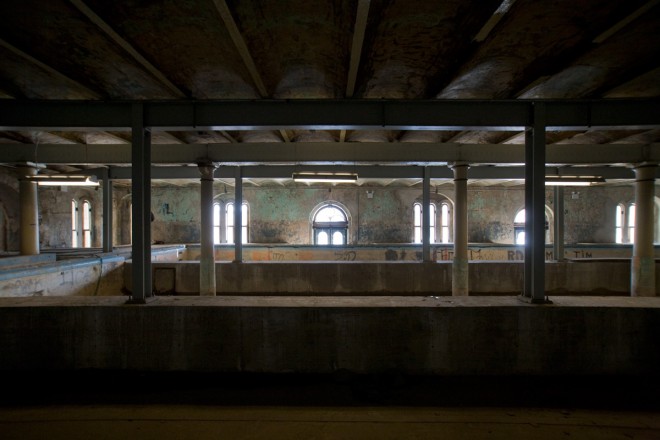 This Saturday, an opera will enliven this Waterworks soundscape | Photo: Bradley Maule

The Kelly family left many a legacy on Philadelphia, from Olympic athletics to city politics to actual royalty—the gorgeous current exhibition on the life of Grace Kelly, Hollywood starlet and Princess of Monaco, is ongoing at the Michener Art Museum through January 26th—but probably none is as unusual as the short-lived swimming pool at the Waterworks. The Kelly Natatorium, so named for the generous funding from the illustrious family, opened in 1961 in what had most recently been the Philadelphia Aquarium. It closed abruptly in 1972 after Hurricane Agnes destroyed most of it, and there it remained behind closed doors until Hidden City opened it up for six weeks during this year’s Hidden City Festival. On Saturday night, it’ll open again for a one-night—and sold out—performance of a site-specific opera.

Brothers Will and Brooke Blair and their friend Craig Hendrix have orchestrated Tributaries: A Modern Cantata, a four-act opera that explores human interaction with water inspired by the characteristics of real bodies of water: the Manatawny, Tulpehocken, and Maiden Creeks, which flow to the fourth, the Schuylkill River. 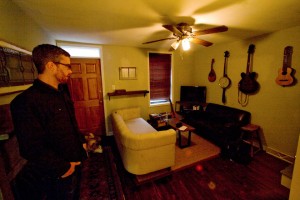 Will Blair at home in Fishtown | Photo: Bradley Maule

The Blair brothers have scored music for TV and films, including Blue Ruin, which screened in at the Cannes and Toronto film festivals. Prior to that, their band East Hundred released three EPs and an album before calling it a day with a farewell show at Johnny Brenda’s in 2012. After an invitation to create a sound installation, they processed recorded sounds of water ranging from a leaky shower to the Atlantic Ocean—and library recordings of the (Ben Franklin invention) glass armonica—to create ‘water music’ (which you can preview on their web site HERE). This music, called The New Mill House and accompanied by a light installation by LUCE Group, will be on display this Saturday in the Natatorium, in advance of the performance of Tributaries.

“The space is a crucial part of the experience,” says Will Blair of the opera. “I hope people enjoy the performance, but I also want people to look around and say, ‘I’m surrounded by strangers, in a swimming pool, on the river’.”

And because everyone, including the players, will be in an unheated swimming pool on the river in December, temperature was a factor in the composition of the music. “The tonality of strings, the dexterity of the players—these were real concerns, so the mini-orchestra is definitely brass heavy,” he says. 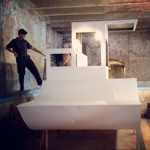 Three singers and eight musicians will perform the Blairs’ music and Hendrix’ water-inspired lyrics on the platform closest the river, while the audience sits across the three lanes of pools, facing the 19th Century arched windows. And off to the rear left, some lucky soul might watch the performance from the captain’s cabin of Camp Little Hope’s fracking boat, a leftover of the best-attended site from the Hidden City Festival.

The mission behind Hidden City opening places like the Natatorium and Germantown Town Hall and Hawthorne Hall takes a long view; that our temporary installations might inspire a more permanent reuse. The Blair brothers’ Tributaries opera furthers that idea with another step toward reopening the natatorium.