Black Is The New Red? 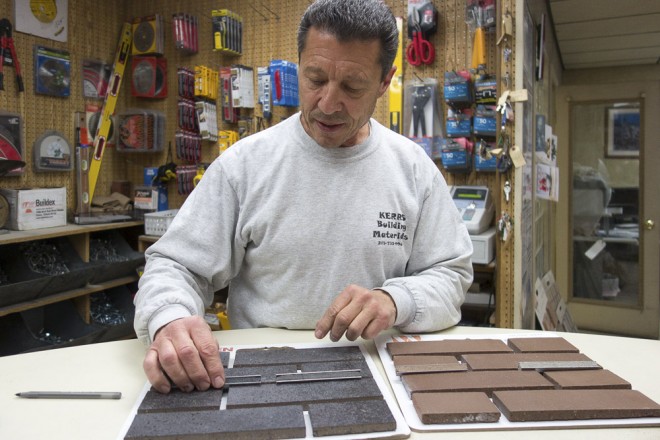 Every ten days or so, the Belden Brick Company of Canton, Ohio ships a flat-bed tractor trailer’s worth of bricks to Kerr’s Building Materials at 1528 Washington Avenue. With row house construction seemingly everywhere, Bella Vista to Brewerytown and well beyond, demand is high. But these shipments don’t contain traditional Old Philadelphia red brick. Instead, demand calls for “Black Diamond” brick–and for distressed, tumbled, and slate-like brick–that reflects a growing taste for contemporary residential architecture. 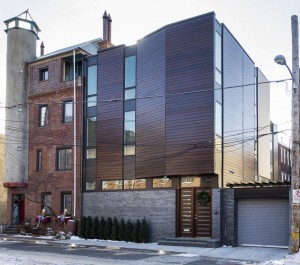 “We chose the black brick because it best fit the overall aesthetic of the modern house. It also looked beautiful with the stained cedar rain screen,” says Nicole Amoroso, of the house she recently built with her husband Pier Nicola D’Amico designed by Richard A. Miller of RKM Architects. “We liked black brick because it offered the durable and time honored reliability of regular brick but the black color gave it a modern sensibility.”

Developers (and brothers) Netanel and Shimon Levi agree. They decided to face their new six-unit condominium at 1307 & 1309 North 6th Street in South Kensington in black brick in order to hint at the modern-feeling interior. “The dark brick looks so modern and just makes sense since we have such a nice clean interior, without old-fashioned trim and molding,” says Netanel Levi.

Realtors and developers I spoke to in Francisville, Fishtown, and South Philadelphia all say they’re using black brick. In Francisville, partners Doris Harris, Anthony B. Miles and Maryam Amaker decided on black brick for a series of residential projects on 16th Street, after researching materials and also previewing other new residential properties, especially in Northern Liberties. “We really wanted our project to stand out, and the darker brick has such a rich look, it’s really different”, says Harris.


“The buyers really love the darker brick, not one person has ever said no about the the color choice,” says realtor Steve Osiecki of the Hagert Square development in Fishtown designed by Moto Designshop. He says the neighbors, too, “really liked the modern look.”

In reality of course, black bricks, which are also made locally by McAvoy in Phoenixville and by Glen-Gery in York, are not always exactly black, but can range in color values from medium flat gray to a deep glossy black. Depending on the light, the bricks can appear to be different colors at different times of the day and can sometimes look iridescent.

Tony Bisicchia, the owner of Kerr’s, says the differences are a matter of the quality of the raw clay. In the brickyard, raw clay is ground to a fine powder, mixed with shale and water and then extruded onto a conveyor belt, in one continuous log. Workers add black dye to the mix while it’s soft and a wire mold cuts the brick to spec before they go in the 2,000 degree oven. Bisicchia says the dark color won’t fade because it’s integrated into the clay. Because of the dark color, they bake longer than traditional brick.

At about $.90 a piece, black bricks cost almost double red. “That sounds like a big difference,” says Bisicchia, “but a typical house will take about 2,000 bricks. So if you look at it in context of a sales price of upwards of a half million, that $800 differential is really not that big of a deal.” Regardless, due to the higher cost, most builders choose to use black brick only on the front of the house, and sometimes selectively at that.

And what about the mortar? “Choosing a mortar color is like putting on a suit–you gotta put on the right tie,” says Bisiccha. Black mortar, for example, creates a monochromatic appearance. 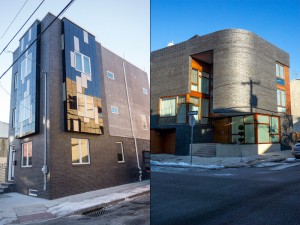 Demand for black brick emerged after the 2009 construction of the “Split Level House” at Fourth and Poplar Streets nearby designed by Qb3 Design, says McDonald. “This is truly where it all began! Mark my words.”

The Split Level House is characterized by a large curving wall of Endicott brand “Manganese Ironspot” black brick. “Early on, it was always thought of as a pale brick building with a slate base,” says Qb3 principal architect Kevin Angstadt. “As we developed the project, that increasingly seemed like the wrong move. For quite a while it was thought of as a chocolate brick similar to the IM Pei building in St James Court. There are people that love it, there are people that don’t. Over all, the reactions have been positive. It seems like it gets more at home every year.”

Angstadt says his building wasn’t the black brick pioneer–rather it was the Residences at the Western Union at 11th and Locust Streets, designed by Cecil Baker and completed in 2007. He says, however, before the Split Level House, “black brick had no context in Northern Liberties. Now that is not the case. It is an interesting case study on how the fabric of the city evolves.”

“It is undoubtedly a trend that will fade away just like the beige brick of the 1950s and 1960s faded away and it will be associated with an era, but that is what brings texture to the city,” he says.