Shining On The Schuylkill Banks 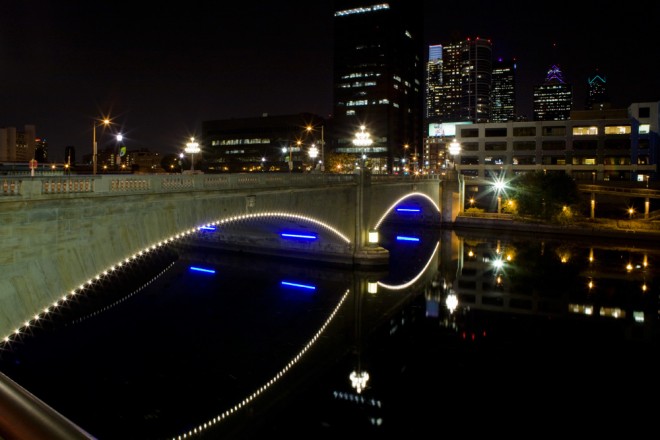 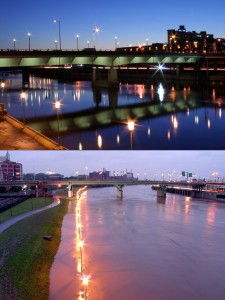 Bridges past: TOP, Chestnut Street Bridge in 2006—its lighting will be restored after PennDOT’s renovation of the bridge; BOTTOM, Walnut Street Bridge during a 2005 flood of the Schuylkill | Photos: Bradley Maule

On September 26th, the Schuylkill River Development Corporation relit four of the Center City bridges whose original lighting was part of Philadelphia’s 24-Hour Millennium Celebration on December 31, 1999–January 1, 2000. That project saw the installation of accent lighting on each of the bridges from Spring Garden to South Streets according to their architecture and layout. This one, under SRDC’s guidance, upgraded lights both above and below the bridges with more energy efficient LEDs and installed flood lights, resulting in the re-illumination of the bridges at SEPTA’s 30th Street Station approach, JFK Boulevard, and Market and Walnut Streets. Chestnut Street was not included in this go-round because PennDOT plans a full overhaul of the bridge within the next two years as part of its program to repair 577 bridges across the state described as “fracture critical” and “structurally deficient.”

In effect, SRDC’s lighting project brought the original millennium lighting project into this millennium, emphasizing their efficiency and sprucing up the eye candy for something that didn’t exist at the time of the original lighting: the Schuylkill Banks park. Formally dedicated in 2004, the Schuylkill River Trail from the Art Museum to Locust Street was the High Line before the High Line, if the Segways® and surrey bikes are any indication. Its success has indirectly and directly led to developments such as Edgewater and the proposed One Riverside, as well as the CSX Connector Bridge (and upgraded dog park) and the Boardwalk under construction. The relit bridges go a long way toward making the Banks an after-dark park. It’s also worth mentioning that, in that same time frame, a new South Street Bridge was built which, though not part of the relighting project per se, has its own light programming that will announce a colorful destination once the 2,000′ Boardwalk is completed next year. 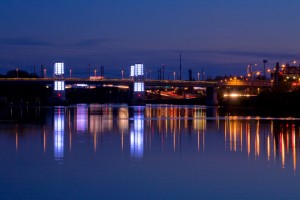 Though technically not part of the SRDC relighting project, the lighting scheme was part of the new South Street Bridge’s design from the beginning | Photo: Bradley Maule

Paid for by a Redevelopment Assistance Capital Program (RACP) grant from the state, the bill clocked in at just under a million dollars, $996K to be exact. Burris Engineers handled the design, while contractors Carr & Duff executed the buildout. The City’s Streets Department coordinated with SRDC on the project to upgrade the street lights on Walnut and Chestnut Streets, installing LEDs and cleaning the globe lights there, as SRDC did for the iconic Market Street globes. As well, Center City District’s ornamental street lamps along the deck and sidewalk atop JFK mesh with the theme.

The one glare to the project as it exists comes from the extremely bright flood lights, installed on either side of the river just below JFK Boulevard. Lane Fike, SRDC Director of Capital Programs, indicates that SRDC is in the process of tweaking these lights to make them perform better.

Like Boathouse Row before it, the upgraded lights on the Schuylkill River bridges provide Philadelphians photo-ops aplenty and another reason to get out on the river after dark.