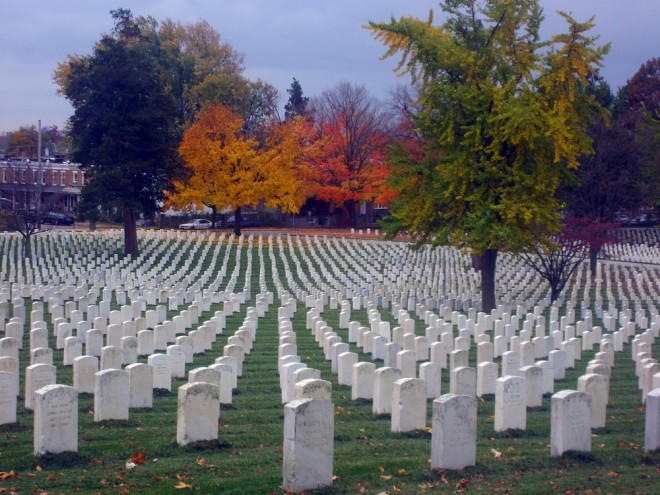 At the corner of Limekiln Pike and Haines Street in the city’s West Oak Lane section, the Federal Government has quietly maintained a simple but important 13-acre piece of property for nearly 130 years. With white marble headstones lined up in perfect symmetry, the Philadelphia National Cemetery holds many stories through the many layers of American history.

Established in 1862 as one of fourteen United States National Cemeteries, Philadelphia National Cemetery was the name given to the collection of seven local cemeteries around the city which were being used for the internment of veterans. In 1881, Quartermaster General Montgomery C. Meigs recommended that a single national cemetery be built, due to the fear of construction of new roads being built throughout the city disturbing the scattered grave sites of the veterans. In 1885, the US purchased the thirteen acre plot in West Oak Lane from Henry and Susan Freeman for the formation of a singular Philadelphia National Cemetery. 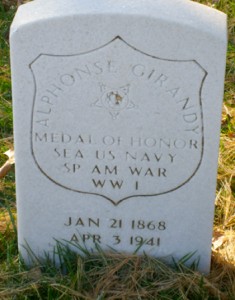 The remains of some 12,000 veterans rest peacefully here along with memorial monuments to American military service personnel from the American Revolution, the Mexican-American War, the Civil War, the Spanish-American War, World Wars I & II, the Korean War, and the Vietnam War. Some grave markers are so weather worn that the engraving in the marble is indecipherable, while others, such as the plaque on a monument dedicated to the Confederate soldiers and sailors call to mind the varied reasons for conflict and the costs suffered to resolve them.

Seaman Alphonse Girandy, whose gallantry in the Spanish-American War saved lives, is among the notable figures interred in the cemetery. On March 31, 1901, Girandy was serving on board the USS Petrel in Manila Bay when a fire ignited, eventually taking the life of the ship’s captain. As the fire burned, Girandy fearlessly entered the lower deck of the ship and managed to pull four shipmates to safety. For his actions, Girandy, a Philadelphia citizen, was awarded the Congressional Medal of Honor.

Perhaps the most notable grave marker in the sea of white marble is that of United States Army Major General Galusha Pennypacker of the 97th Pennsylvania Infantry. General Pennypacker led his troops at the Second Battle of Fort Fisher, North Carolina, where he was severely wounded after capturing the Confederate fort and planting his company’s colors in the sand. Having survived his injuries, Pennypacker was promoted to Major General at the age of twenty, becoming the youngest to ever rise to this rank in the United States Army, a distinction he holds to this day.

Years later Pennypacker was awarded the Medal of Honor for his work at Fort Fisher. He retired to his home on South 10th Street in Philadelphia in 1872, where he lived until his death in 1916. In 1934 Charles Grafly and Albert Laessle erected a statue in his honor which still stands on the north side of Logan Square. 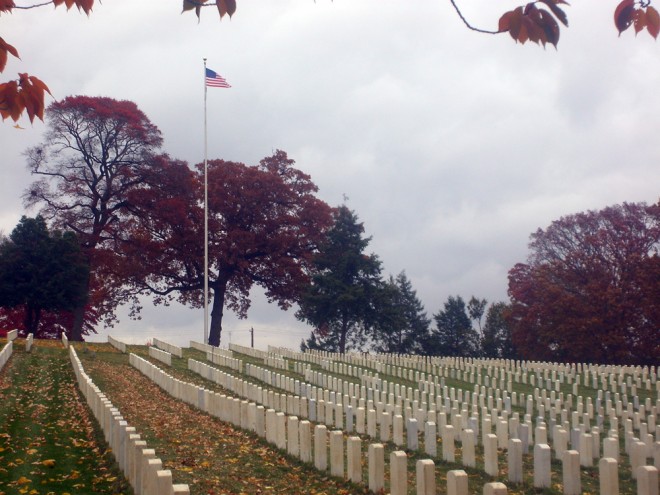 In addition to the two recipients of the Medal of Honor, the cemetery is the final resting place for 66 Buffalo Soldiers, members of African-American regiments in postbellum wars.

Philadelphia National Cemetery was added to the National Register of Historic Places in 1997, and has been closed to new burials since 2008. For more information, visit the US Department of Veterans Affairs web site HERE. 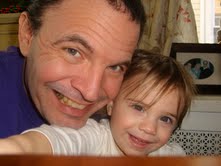