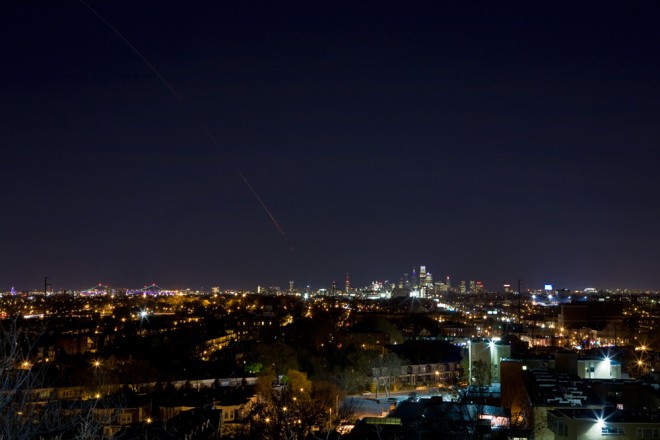 Part man, part bull; part science, part entertainment. NASA and the US Air Force launched an expendable Minotaur 1 rocket Tuesday evening, releasing a record 29 new satellites into orbit, adding to the 1,000+ already up there–like the Hubble Space Telescope, the International Space Station, and the GPS jawn on your phone. The launch occurred at NASA’s Wallops Flight Facility on Virginia’s eastern shore, on the other side of the bay from Chincoteague Island. The site’s south-southwest position relative to Philadelphia jibed with the city’s north-northeast/south-southwest axis, so photographically speaking, heading north for a view “due south” across the skyline down our tilted grid seemed like the move. 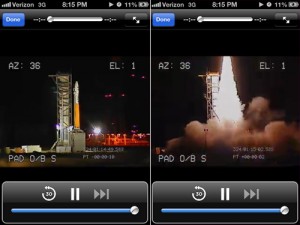 With a scheduled launch window of 7:30–9:15pm, I caught the 7 o’clock express to Fern Rock and hoped to make it in time to Albert Einstein Medical Center, as fine a vantage as any. With a nearly two hour window and a dying phone battery, I envisioned staring into the distant south, hands in pockets, hoping I’d maybe see it. But in a parking garage miracle, I found an outdoor electrical outlet not three feet from my tripod, plugged in my phone, and watched the NASA feed of the launch on Ustream, eagerly looking south-southeast at liftoff. Of course by this time, the rocket was already above the horizon, above the skyline, and thanks to the buffer–my own miscalculation–my camera missed the first few seconds of ascent. (I blame satellites.)

Nevertheless, for the three minutes or so Minotaur 1 sailed across the sky, it flickered between the other aircraft in an eastbound arc, its orange glow signing off to the flickering orange lights of the city–and earth–below.