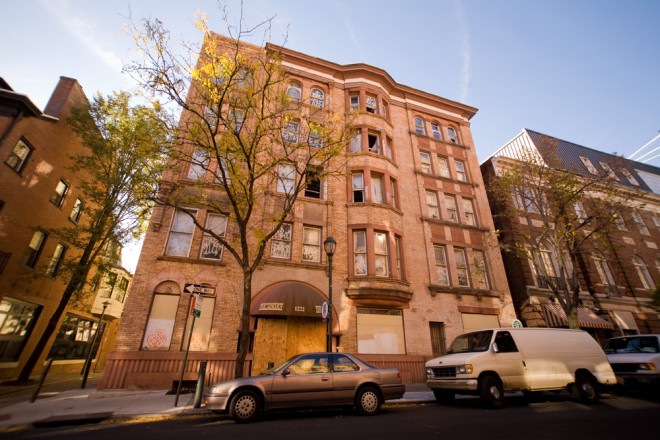 After seven years as a boarded up shell, during which time it became the subject of numerous safety violations, several protracted court battles and increasing scrutiny from the City, the Lincoln Building at 1222 Locust Street in Washington Square West has a new owner. According to court records and City and neighborhood sources, David Perlman’s Pelican Properties is moving forward to redevelop the five-story apartment building–sometimes mistakenly attributed to the architect Frank Furness–before the City condemns the property. 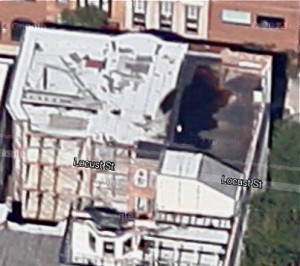 Damage from the 2006 fire is visible at right | Source; Google Maps

Since a massive fire gutted the building in July 2006, the Department of Licenses and Inspection has declared the walls as unstable, while business owners on the block have complained of loitering and drug dealing taking place on the premises. This year, L&I took the former owner–Brooklyn developer Jacob Ungar–to Equity Court for failing to make the property safe. While an insurance dispute was the ostensible reason for stalled progress, Ungar also faced suits in United States District Court from a lender and third parties claiming ownership.

Perlman, who had entered into a tentative agreement of sale with Ungar in January, purchased the building on September 25th for $2.22 million under the name Twelve22 LP, and is quietly proceeding with redevelopment. On November 1, L&I granted architectural firm Cecil Baker & Partners a permit to construct six stories within the envelope of the building.

A firm representative confirmed that the new owners are retaining Cecil Baker’s designs from 2011, the last time that work on the building appeared imminent. The plan calls for 44 apartments, including studio, one- and two-bedroom units. Major alterations will be limited to the interior and a sixth-story addition that will not be visible from the street, the representative said. 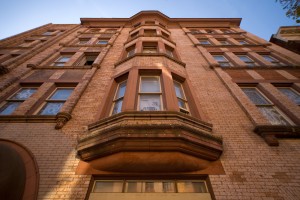 Perlman, who also owns the Philadelphia Residential Development Corporation, did not respond to repeated requests for comment.

The property’s next court date is scheduled for December 12th. L&I Communications Director Rebecca Swanson said the City will ask to substitute Twelve22 LP as the defendant now that it owns the building.

“If they [submit the permits], the case will likely be continued for the work to commence,” said Swanson. She also noted that the owners have been in contact with the City’s Law Department, which represents L&I in court.

Washington Square West Civic Association president Clay Scherer said that the new owners haven’t yet made a community presentation for their plans, but said that they certainly should, even if those plans are identical to Ungar’s 2011 proposal. Scherer said he thinks the neighborhood will support the redevelopment of what has been a nuisance property.

“We need every bit of investment that will come our way,” Scherer said. “That’s something that’s true of the city as a whole and it’s definitely the case with us. We need to bring in new residents who will be active contributors to businesses and our neighborhood and a high-quality apartment [building] would be welcome.”

The sale to Pelican was the culmination of a series of lawsuits between Brooklyn real estate investors that involved a bet din, a rabbinical court that arbitrates matters of religious law among Orthodox Jews.

The Lincoln was scheduled for federal marshal’s sale in June after Judge Harvey Bartle, III found that Jacob Ungar’s ADAR LLC had defaulted on the mortgage held by Eastmark International. However, two weeks prior to the sale, two Brooklyn developers, Benzion Faibish and Yehuda Olewski, filed an emergency request for a temporary restraining order. 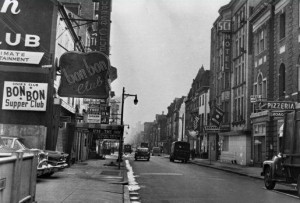 Looking east down Locust Street from 13th in 1959. The Lincoln is at right past the “pizzeria” sign | Archived at PhillyHistory.org

According to Judge Bartle’s memorandum, Faibish and Olewski claimed at the time that they owned 42.5 percent of the property and that the mortgage held by Eastmark was “a fraud intended to deprive them of their ownership interest in the property.” (Faibish and Olewski also sued ADAR in Philadelphia Common Pleas Court in 2009, claiming they were defrauded of their ownership stake after the fire; the case was withdrawn.)

The judge granted their intervention, and the sale was cancelled. In August, all of the involved parties reached an agreement: Eastmark would not proceed with the marshal’s sale, and a bet din would be convened to settle the dispute. The bet din issued an oral ruling urging the parties to resolve their differences outside of federal court, and deferred to  the jurisdiction of a previous bet din, which ruled on July 30, 2012 that the property couldn’t be sold or altered without written authorization from the rabbis or Faibish and Olewski.

After ADAR’s sale of the Lincoln to Pelican closed in September, Faibish and Olewski filed for an injunction claiming that ADAR had flouted the recent bet din agreement. On October 28, Judge Bartle denied the motion. While agreeing that the sale violated the rabbinical court’s jurisdiction, Bartle found that Faibish and Olewski were not harmed by the sale because the property was sold at a loss–$2.2 million versus $3.6 million for the mortgage.

Bartle’s opinion also took the Lincoln’s fragile state into consideration. “Twelve22 LP has agreed to invest a sizable sum of money for the restoration of the building,” he wrote. “Any investment of this kind is in the public interest. Time also appears to be of the essence.” 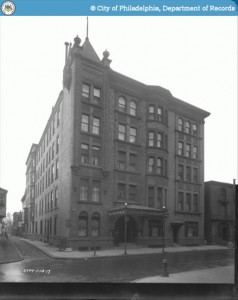 The Lincoln: 1917 | Photo by Charles Mills, archived at PhillyHistory.org

From YWCA to the Taboo Room

Originally a hotel, the Lincoln was constructed in the 1890s based on a design by architect George H. Fettus, rather than Frank Furness, as is commonly believed. Records from 1892 show Furness, Evans and Co. as the commissioned architects, however there is no record the firm did any work on the project between that date and 1899, when the final product by Fettus was documented.

According to Furness historian Michael J. Lewis, the gap between Furness’ initial involvement and Fettus’ final design is still unexplained. He theorized that the Panic of 1893 forced developers to scale down the Furness design for a simpler one.

“Fettus’ barebones brick crate is all that survives of the ‘very handsome design’ that was promised in the fall of 1892,” Lewis said.

The hotel’s first owner was the Young Women’s Christian Association. The YWCA’s affiliation appears to have endured until at least 1930; found stationery from this period refers to the “Hotel Lincoln for Business and Professional Women.” 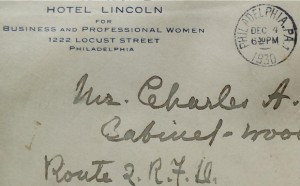 The Lincoln’s mid-20th-century reputation for seediness developed in tandem with the decline of the neighborhood. The building housed a nightclub called the Taboo Room and became a residential hotel for sailors. By the 1980s it had turned into a flophouse renamed the Midston.

In 1985, the building was converted into luxury apartments and the Lincoln name restored. Ungar, who acquired it in 2005, had begun converting the building into condominiums when the fire broke out.

Although never listed on the Philadelphia Register of Historic Places, the Lincoln is a contributing property in a proposed Washington Square West Historic District. The nomination for the district was submitted by the Preservation Alliance to the Historical Commission in 2010 but is still pending review.