In West Philly, Redemption For A Strip Mall 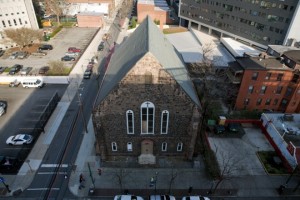 The Methodist Episcopal Church at 40th and Sansom Streets in University City will soon meet its maker, to be replaced by a one-story glass box anchored by a Dunkin Donuts. In contrast to the house of worship it supplants, the new structure will undoubtedly flaunt its strict utility, claiming fidelity to none other than the cheap materials with which it will be constructed. Its proponents will lean on the tired aesthetic theory of “less is more” to mask a dearth of ideas and mere cost cutting.

In the Pennsport neighborhood of South Philadelphia, St. John the Evangelist Episcopal Church was recently leveled to clear the way for a subdivision of four-story townhouses. They’ll look like all the other new homes cropping up in Pennsport with algorithmic consistency.

Most of us accept this proliferation of sameness at the loss of architecturally significant buildings as an inevitable outcome of the city’s redevelopment process. Yet contemporary architecture can also be employed to reverse this process, as the newly consecrated University City Chinese Christian Church, built on the ruins of an unfinished strip mall in West Philadelphia, attests.

Spanning the northwest corner of 45th and Walnut Streets in the Spruce Hill neighborhood of West Philadelphia, the elegant geometry and muted color palette of the UCCCC’s low-slung new home stands in stark relief to the richly embellished Association of Islamic Charitable Projects mosque–the former St. Andrews Methodist Church–opposite it on 45th Street. A white cross splits one section of the church’s façade into asymmetrical polygons, giving it the illusion of dimensionality. Aside from this abstract niche, a flat awning suspended by cables is the only other element that breaches the building’s flat profile.

Dr. Philip Siu, a church elder and practicing pediatrician who played a pivotal role in acquiring the building, explained with a laugh, “It’s not simplicity by design. It’s simplicity by default.” When the church outgrew its former home in Chinatown, Siu went in search of a building that could accommodate the growing congregation of Chinese students and recent immigrants. The unfinished strip mall, built on the site of a former gas station for a cost of $1.1 million, would do. The cinder block box had languished on the market for years and was a source of much anger and frustration in the neighborhood.

The UCCCC consulted with brownfield redevelopment experts and conducted soil testing to obtain a clean bill of health for the site. They obtained permits to add a second floor with 10 residential units and a mezzanine level overlooking the ground floor sanctuary. In two months they raised the funds to purchase and transform the building. 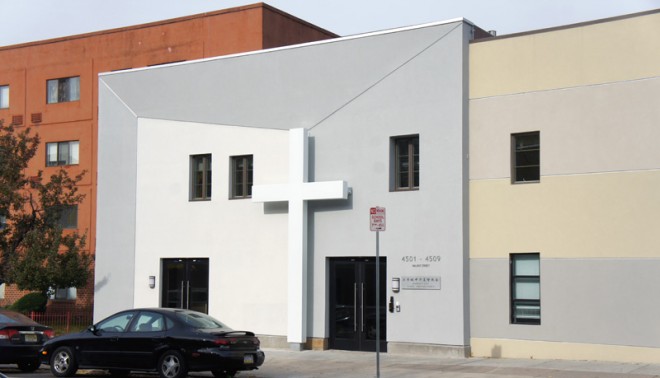 After meeting with the Spruce Hill Community Association, church officials agreed to enlist a congregant, architect Fan Zhang, to enhance the façade. The architect favored clean lines and subtle variations of grey and beige. The whitewashed interior, also designed by Zhang, rivals the church’s exterior for laconic grace. In lieu of frescos and stained glass, there are white acoustic panels and exposed ceiling beams. But for the wooden crucifix, tables and lectern, the sanctuary could be mistaken for a “smart” lecture hall, replete with projectors and stacking chairs.

That it took a church to add the subtle accents and architectural enhancements that make this new construction a welcome addition to the neighborhood approaches irony, were it not for Dr. Siu’s earnestness. Although some churches have been lost to new construction, many religious communities in West Philadelphia are in fact thriving, thanks in large part to immigrants willing to repurpose bland commercial spaces and storefronts into places of worship, challenging the notion of a tidy zero-sum game between the old and sacred and the new and profane.

During the week, the sanctuary doubles as a cafeteria for a parochial school that rents space for its 60 middle-school aged students and community groups hold meetings there too. On the upper floor there are church offices and housing for visiting scholars, partly subsidizing the church’s operations. The church’s simplicity may owe more to budget constraints and happenstance than to any architectural theory, but the overall effect works for the UCCCC’s collegiate congregation. Perhaps coincidentally, it echoes the Lutheran policy of eschewing frivolous ornamentation.

Members of the church are drawn from the roughly 5,000 Chinese living in University City, a number that doubled between census years 2000 and 2010. As one group of students returns to China, credentialed and imbued with the faith, another wave of students arrives to replenish them. This fall, Drexel University alone counts 700 Chinese students among its incoming class, Dr. Siu estimates. Young families and seniors make up the rest of the 180 congregants. 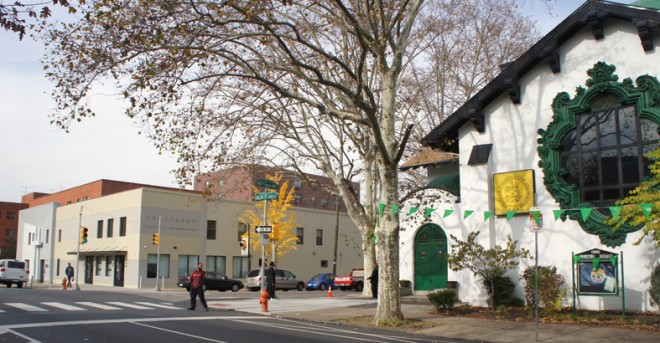 At first glance it would appear that the church of hard angles and the Association of Islamic Charitable Projects mosque across the street have little in common. Designed in 1907 by prodigious local architect Clarence Eaton Schermerhorn, the mosque’s windows alone span two stories, their frames richly contoured and painted a deep green. Huge decorative braces secure the central building’s pitched roof. The house of worship began its life as St. Andrews Methodist Church, changing hands a few times over the years before it was nearly lost to a fire. The AICP rehabilitated the burned out church in 1991 and established their North American headquarters there. Since then, the AICP has served as a hub for the polyglot of Muslims who live nearby; the mosque’s presence and rigorous programming have helped stabilize this once-blighted stretch, making it attractive to UCCCC. Like the UCCCC, the AICP houses daycare facilities and a parochial school. Mosque members opened Manakeesh café in a vacant bank across the street.

As UCCCC grows and engages with the diverse community around it, one expects its congregation to have a similarly salutary effect on the neighborhood.