From Obscure to Ostentatious: The Flint Building 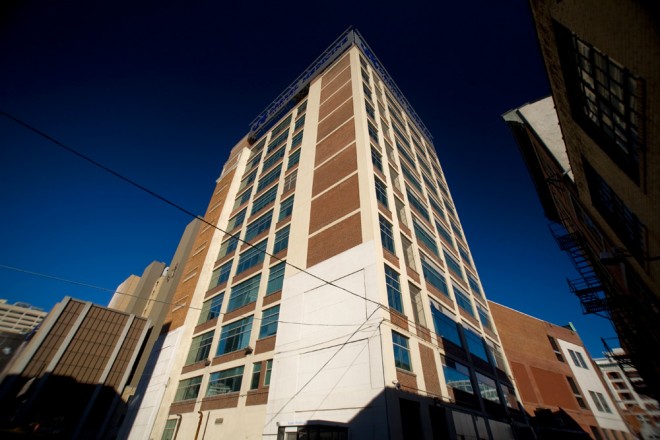 George Flint, an ordinary entrepreneur? Well now that’s a rather modest understatement. Throughout the 1910s, 20s, and 30s, Flint was president of the Atlas Shipping Corporation, the Federal Knitting Company, the Axminster Carpet Company, the Penn-Florida Lumber Company (later known as the Flint Lumber Company), and the Flint Realty Company–mostly at the same time. Not enough for ya? He was also director of the Manayunk National Bank and the Bank and Trust Company of Philadelphia.

A man with this many capitalist enterprises can’t be too satisfied paying someone else for office space from which to run this extensive empire. In the late 1910s, Flint set his sights on building his own office building/factory where he could conduct theses businesses from one central location. At the same time, the Hurley Motor Company, dealer for the REO Motor Company, wanted to expand out of the little building they were operating from at Broad and Race Streets on Philadelphia’s then-landmark Automobile Row, where factories, dealerships, and distributors of automobile and auto accessories dominated North Broad Street between Cherry and Brown Streets. 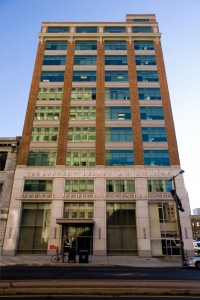 Flint, being a major partner of the REO Motor Company (and later president of REO Philadelphia) and a consultant for Hurley (later president), chose to place his personal headquarters on Automobile Row. In early 1920, Flint purchased a couple of 1850s-era structures at 219-225 North Broad Street and announced that he would construct a 15-story, $750,000 office/factory in the 80′ x 100′ space. It would be known as the Flint Building.

Flint commissioned the architecture and engineering firm of W. Steele & Sons to both design and construct the building. By the time shovels hit the ground at the end of 1920, the Flint Building had been reduced to a 11-story, $350,000 design. Construction was completed in early 1922 and the building officially opened on April 1, 1922 with a huge celebration banquet at the grand ballroom at the top of the (Divine) Lorraine Hotel. With REO dealers from all around the region in attendance, George Flint and Scott Hurley (then-president of Hurley Motor Company) acted as masters of ceremonies.

The building’s design seems pedestrian at first glance but has some unusual characteristics. Though primarily designed as an office building, the façade’s large windows suggest a more factory-like attitude. On top of that, windows were installed on every wall instead of just the ones facing a street. The southern party wall has windows placed on a section set back a few feet from the property line, giving some respect to any building that would have been built next door. (Unfortunately, that space has been a surface parking lot since 1927.) The northern party wall makes no such accommodation, placing windows directly at the property line, peering over the old auto factory/dealership that still stands next door.

When first opened, the Flint Building held the Hurley Motor Company’s dealership on the first floor with a quasi-factory in the basement. The middle floors held the new offices of W. Steele & Sons, who were so proud of the building they designed and built that they moved in. The top floors became home of the George Flint empire of companies, corporations, and concerns. Philadelphia’s Prohibition Enforcement Office, under the purview of Major William G. Murdock, also found some space in the new building. 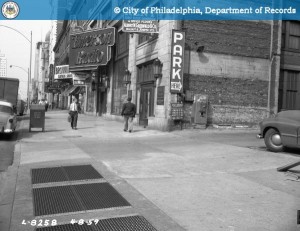 Street-level at the Flint Building in 1959, sporting a large marquee for the Emerson Radio, one of many radio concerns to roll through the old Flint in the 1950s | Photo: PhillyHistory.org

While the occupants of the ground floor and top floors remained with the building well into the 1930s, the middle floors eventually became dominated by the Inter-State Milk Producers’ Association, Philadelphia District Dairy Council, and the Philadelphia Interstate Diary Council. These three organizations formed with the express purpose of promoting the consumption of milk and providing education about the benefits of milk safety. From the Flint Building, these organizations tested milk being sold in the grocery stores of Philadelphia, produced films that educated the masses about milk, conducted studies proving the nutritional benefits of milk consumption, organized milk giveaways for poor families, and sniffed out snake oil companies that produced harmful milk substitutes.

In the 1940s and 50s, with Automobile Row now completely removed to its northern end, the ground floor and basement space became home to a string of radio and radio part producers and distributors. The upper floors, with Mr. Flint’s empire gone, were now occupied by the Warner Company, which primarily dealt in the quarrying and transport of limestone while also distributing sand and cement.

Starting in the late 1950s and extending all the way into the late 1980s, a series of trade schools and professional training schools made the Flint Building their Philadelphia Campus. The Antonelli School of Photography, the Philco Technical Institute (later known as Philco-Ford), the Educational Technology Institute, and PSI Institute all came in and out of the building over that time. In the late 80s and early 90s, numerous city offices, nonprofit organizations, and a single architecture firm used the aging space. 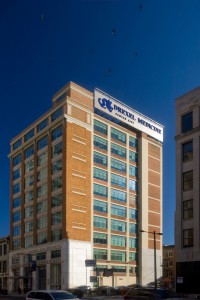 That sign, the birds notice it when they fly by | Photo: Bradley Maule

In the late 1990s, Hahnemann University, then part of the now-defunct Allegheny University of Health Sciences, started to lease space in the building and eventually took over most of its space. They engaged in some interior renovations during this time. In 2003, a year after Tenet Healthcare began a 20-year merger with the Drexel University School of Medicine, the old Flint Building was purchased by Drexel University for $4.2 million.

In 2008, Drexel initiated a major renovation with the help of the Francis Cauffman Foley Hoffmann architecture firm (now Francis Cauffman). The exterior was cleaned, bricks repointed, and windows replaced. Some of the windows on the Flint Building were originals and still carried damage from a 1927 fire that burned down the Tremblay Auto Company next door. The ground floor’s stonework was redone and the whole building underwent a complete technological upgrade. The most major change to the building, however, would take place up top. A large, lit-up sign declaring the presence of the Drexel School of Medicine at this location was installed in 2012, making the Flint Building visible from long distances at night.

Now called the Arnold T. Berman, M.D. Building, it seems brand new despite its 91 years, and it provides a long list of medical services. Cars, carpets, radios, temperance, milk, trade schools, med schools. Many are the lives the old Flint Building has lived, and it looks as good as ever approaching 100.