Expansion At The Woodmere, Take 2 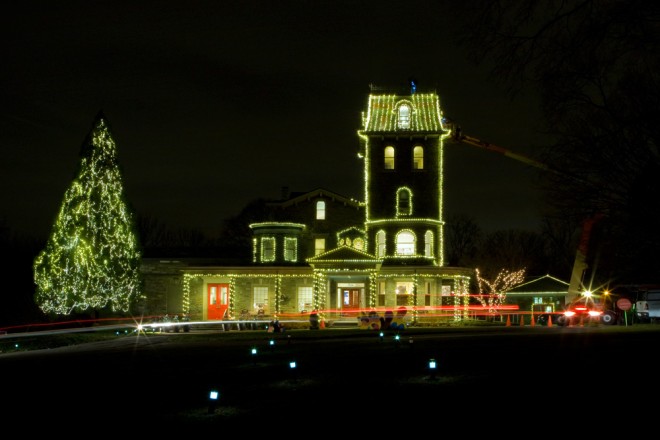 Getting ready for the holidays at the Woodmere | Photo: Bradley Maule

Anyone expecting fireworks at Thursday’s open house at the Woodmere Art Museum in Chestnut Hill had to settle instead for the installation of Christmas lights on the Victorian mansion—a new complement to the traditional lights adorning the giant conifer next to the building each holiday season. The open house, an introduction of the community to architect Matthew Baird, who the Woodmere has chosen to craft its master plan and expansion, was downright cordial, a relief after the years of contention following the 2001 expansion plan from Venturi Scott Brown and Associates. 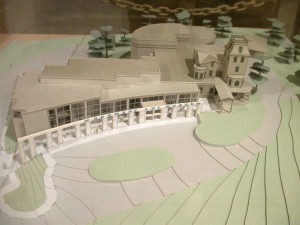 VSBA’s plan would have built an enormous modern extension outward from the main building, sloping downhill with a Venturi-esque “Woodmere Art Museum” sign announcing itself to Germantown Avenue. That plan never sat well with the North Chestnut Hill Neighbors, who challenged the museum in court over parking and aesthetic concerns until eventually it fell through.

Baird brings a different vision to a museum that itself is arguably, a decade later, a little different. Since Bill Valerio took over as Director and CEO in 2010, the Woodmere’s attendance has risen—as have the donor base and expense budget. But the museum’s infrastructure hasn’t kept pace, so Valerio called for a master plan that modernizes facilities as well as expands the gallery space. “A lot of the long term master plan is very workaday, nuts and bolts stuff—how much life is left in the heating and cooling system, accessibility, better bathrooms,” Valerio says. “One of the fundamental goals of the expansion is adaptive reuse—to make the best of what we already have.”

Among the current conditions at the Woodmere’s six-acre campus: a currently underused Director’s House, a lawn that has suffered from water runoff issues, and a tenuous connection with Germantown Avenue—all considerations for a new architect when the Woodmere sent out its RFP. Matthew Baird’s response, stressing connectivity, transparency, and clarity, was selected from a pool of architects either based in Philly or with Philly connections. Of course Baird’s architectural pedigree didn’t hurt.

Coming from a family line of architects—his grandfather designed a number of York County’s civic structures, and his great-grandfather was on the PAFA board that selected Frank Furness for their landmark main building—Baird spent his formative years in Chestnut Hill. In his presentation, he recalled going to the Woodmere as a youth. He also tipped his cap to his Chestnut Hill forebears. “There’s an incredible architectural legacy here,” Baird says, citing George Howe’s High Hollow, Louis Kahn’s Esherick House, and Robert Venturi’s Mother’s House. “They’re all touchstones for anything we’ll try to accomplish here.” 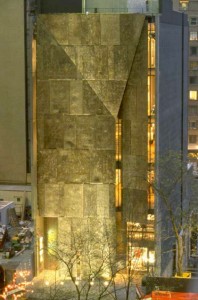 This thoughtfulness is not lost on the near neighbors. “I can tell you that at the present time [that] I am pleased with the approach and direction of Woodmere and its architect,” says Bob Shusterman of the North Chestnut Hill Neighbors. Shusterman helmed the NCHN’s opposition to the VSBA plan, but considers the current process more inclusive and cooperative. “The neighbors want Woodmere to succeed,” he stresses. “I think that the values that Bill Valerio has been discussing for the museum, the site, and its physical plant are good for the near neighbors and the museum.”

Of course the Woodmere isn’t Baird’s first foray into a controversial museum. In his time at Tod Williams Billie Tsien Architects, he served as project architect for the American Folk Art Museum. Completed in 2001, the New York museum earned critical acclaim, including the AIA National Honor Award, but attendance fell short and its $32M cost proved too costly after the financial collapse. In 2011, the neighboring Museum of Modern Art purchased the museum for its own expansion and announced plans earlier this year to demolish the 12-year-old building. An immediate backlash from critics and the architecture community made them reconsider. “That’s a building I hope won’t be torn down,” Baird told the open house to nervous laughter.

While the Woodmere’s VSBA plan was ultimately shelved, Baird has learned from it and its process. “A lot of the research they did is still very valid—accessibility, research and storage space,” he notes. “You better believe I’ll be flipping through my Learning From Las Vegas,” he jokes of the 1972 Venturi Scott Brown book.

“A lot of what we’ve heard is the Woodmere needs to maintain its identity as a quirky museum with a countryside,” Valerio says of his preliminary meetings with neighbors. Museum founder Charles Knox Smith, a Kensington-born self-made entrepreneur with investments in oil and mining, had an Emersonian view of city and nature, and founded the museum as a way of infusing that experience with art. With that in mind, Valerio says, “we want to reestablish a connection with the [Morris] Arboretum, the Wissahickon, and with main street, Germantown Avenue.” 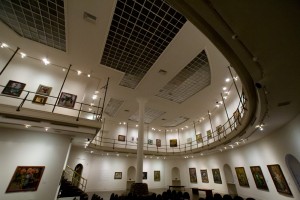 There’s room to do that across the six acres extending north from Germantown Avenue between Bells Mill and Hillcrest Roads. Much of the land sits overgrown with brambles, space that might become a sculpture garden with pathways. Baird referenced the Hirshhorn Museum and Storm King Arts Center in his presentation as potential inspirations. “But,” he says, “the scale has to stay domestic, as it’s an asset to the Woodmere.” To that end, one of the highest priorities is improving pedestrian access from Germantown Avenue, for those arriving on foot from the train and the Wissahickon.

The largely vacant Director’s House, along the Bells Mill side of the property, could be used for offices and administration, freeing that space for artwork in the main Victorian mansion. That, and expanding on the centerpiece Catherine M. Kuch Gallery in the building’s rotunda, will allow for a greater permanent display of the museum’s collection. Currently, only 3 percent of the museum’s holdings are displayed.

With a growing base, a determined director, and a four-star rating from Charity Navigator, the Woodmere has the potential to fill the void of the domestic-art-on-landscaped-grounds experience left by the Barnes Foundation when it moved downtown. And with its mission toward showcasing Philadelphia art and artists, the revamped estate in the Wissahickon valley comes with an added layer of civic pride.