Charting What’s Next At The Royal Theater—Again 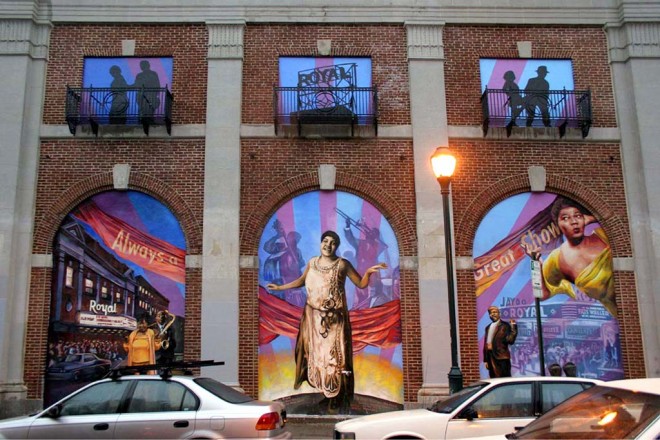 By most measures, last night’s public meeting hosted by the South of South Neighborhood Association and South Street West Business Association regarding the future of the Royal Theater–and more notably its past–went surprisingly smoothly. What could have been a volatile discussion on the historic but troubled venue, or worse, a gentrification debate underlined by class and race, came off more as of an info session outlining the building’s history, Michael Singer’s poor stewardship of the Royal from 1975 until 1998 (when the Preservation Alliance purchased it), and the last 13 years of big ideas, during which time Kenny Gamble’s Universal Companies has owned the building.

Universal, represented by president & CEO Rahim Islam and executive vice president Shahied Dawan, shared a chronology of the proposals they’ve put forward for redeveloping the Royal, a somewhat defensive preface before explaining their latest plans, which include demolition of all but the South Street façade and the creation of 7,000 sq ft of retail space and 30 rental units upstairs, as well as six market-rate townhouses Kater Street (with garages accessed by one curb cut) and 13 parking spaces. 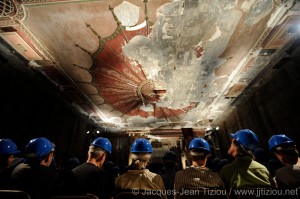 While this seems like an anticlimactic solution for what many claim was once Philadelphia’s center of African-American culture, what may have once been worth saving is simply gone. After listing the various proposals, including a Scribe Video Center for film and theater, a Pennrose-Parkway-Universal partnership for a South Street West entertainment district, an anchor for the Rhythm & Blues Foundation, and a House of Blues–all of which fell through for being cost prohibitive–Universal ended the presentation with a photo of the state of the Royal’s interior taken last week. It is, in a word, dire.

It was already empty and deteriorating in 2009, when the Royal Theater was one of nine sites to host the inaugural Hidden City Festival. “At this point, there’s no purpose in bringing the Royal Theater back because there’s nothing left of it,” says Thaddeus Squire, Hidden City’s founder (also the founder and managing director of CultureWorks Greater Philadelphia). “It’s unfortunate, but we can’t fill the theaters we already have in Center City,” he says, citing the struggles of the Clef Club of Jazz and the Suzanne Roberts Theatre, both within three blocks of the Royal.

Carl Dranoff, whose Dranoff Properties has along with Universal Companies propelled development southward on the Avenue of the Arts, echoes Squire’s sentiment. “If [redeveloping theaters] was easy and everyone could do it, everyone would,” Dranoff says. “You see the Boyd Theatre, [and] the Prince declared bankruptcy.”

“The Boyd is a different beast,” Squire observes, “where there is substantial detail that can be saved.” Florida’s iPic Entertainment seems determined to not do that, as their major redevelopment would gut the old palace and replace it with hyper-modern, upscale amenities. At this stage at the Royal, “I think anything is good there,” Squire says. “The preservation community has bigger battles to fight.” 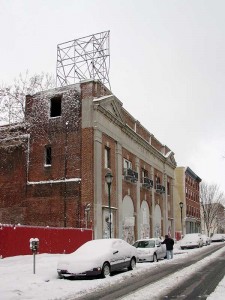 After languishing for over 40 years, the fight to save the Royal Theater appears to have run out of steam. One gathered that sense from Universal’s Islam and Dawan, whose presentation lauded Gamble’s musical accomplishments and the fact he relocated from the suburbs back to this, his home neighborhood. They also stressed the $50 million they’ve put into developing over 200 housing units as the old South Philly neighborhood has become the Graduate Hospital Area, or G-Ho, or Southwest Center City, call it what you will. Even as the area’s value has skyrocketed, the Royal has stayed mired in big dreams whose numbers couldn’t add up.

Now, likely spurred on by the Act 135 petition filed by neighbor Juan Levy nominating Ori Feibush to be conservator of the property, Universal has a renewed urgency to make the numbers add up. To help do so, they’ve brought on Carl Dranoff as an adviser. “A friend and adviser is a better way to put it,” Dranoff tells Hidden City, “because we’ve worked on a number of projects in the past. They’ve asked me to help devise a plan to pass muster with neighborhood advocacy groups and the historic preservation community.” The latter includes the Preservation Alliance, from whom Universal purchased the Royal with an easement in place for only the façade, and the Philadelphia Historical Commission, who would need to approve demolition of the rest of the building.

That’s still a ways off, as last night’s was only the first of several meetings hosted by SOSNA and SSWBA on the project. Then there are the historical commission rulings. Then there are zoning variances. Then there’s the financing. “We hope at the end of this process, we have a financeable project,” Universal’s Islam told the crowd last night. “Change is hard for everyone, but we get it done.”

The day after yet another development for the Royal from Universal aimed to get footing, another reached the finish line. Universal and the City Office of Housing and Community Development this afternoon announced next week’s ribbon cutting on the LEED Silver Nicetown Court II, a $19M mixed-use development adjacent to Wayne Junction Station.

The Royal Theater was designed by Frank Hahn and built by Abraham Wax in 1919 as a one-of-a-kind African-American entertainment venue. In its 50 years of operation before closing from the threat of the never-built Crosstown Expressway, it hosted live performances from Bessie Smith to Billy Paul, and was the site of neighborhood talent shows and radio broadcasts. It was added to the National Register of Historic Places in 1980.