Camden To Finally Get Its Gondola 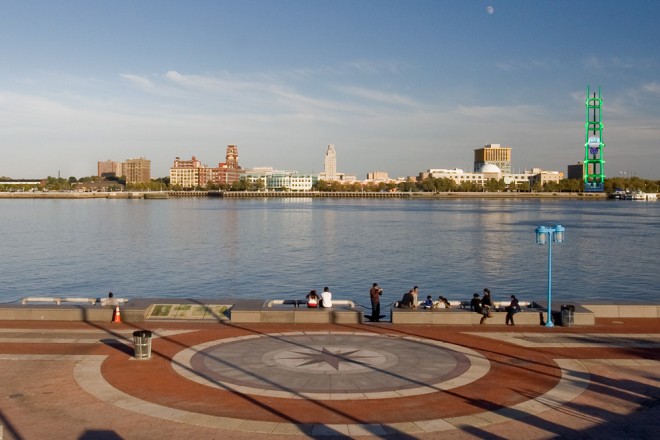 Camden skyline, circa 2015 | Photo and composite by Bradley Maule, rendering of Skyview by Herschend Family Entertainment

Big changes are coming to the Delaware Riverfront–Camden’s Delaware Riverfront. The Adventure Aquarium announced plans this week for the construction of a 300′ observation tower that will at once change Camden’s skyline and provide Penn’s Landing visitors with a new focal point.

It’ll also provide Camden at least a version of its long planned gondola. In its failed competition to redevelop Penn’s Landing ten years ago, the Delaware River Port Authority famously required the proposals to include an aerial tram connecting the Philadelphia and Camden riverfronts, with ski-lift-like gondolas carrying visitors between the two. That idea got as far as a giant concrete pi on the Philly side, and rubber-rimmed foundations on the Camden side. With the Skyview Tower, a gondola will at last elevate Camden riders some 25 stories in a contraption that resembles the Zoo Balloon in a tube. 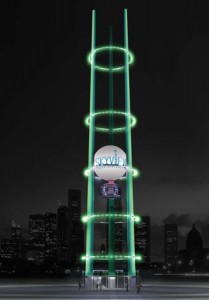 And much like the Zoo Balloon, Skyview will be part of a larger tourist attraction (Adventure Aquarium), but accessible to the general public. Positioned at the south end of the aquarium, adjacent to the Riverlink Ferry terminal and Wiggins Park, it will easily allow casual visitors to take in the view on their way to the USS New Jersey or Susquehanna Bank Center.

At 300′ and right on the river, it will instantly alter the form of Camden’s tiny skyline, which otherwise includes the iconic 12-story RCA Nipper Building (Dranoff’s condo The Victor) designed by Ballinger in 1909, Michael Graves’ 11-story headquarters for DRPA One Port Center from 1994, the two 20-story, 1960s-era Northgate apartment towers, and of course Camden City Hall, opened in 1931 with a design by Edwards & Green. At 371′, City Hall is the only Camden building which will surpass Skyview in height. (The Ben Franklin Bridge’s towers are 380′ to the top.)

Skyview Tower will be privately funded by Herschend Family Entertainment, Adventure Aquarium’s parent company which also owns other entertainment outfits such as Dollywood in Tennessee and the Harlem Globetrotters. The design and construction come from London company Tower Systems Ltd., whose logo is seen on the ‘balloon’ part of the renderings. The tower will be programmed to change colors according to seasons and special events.