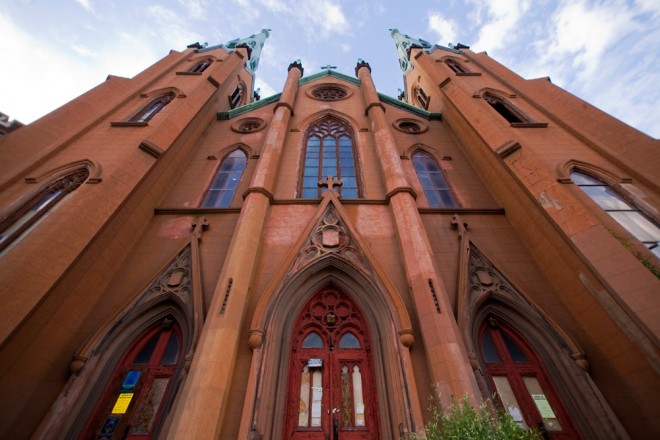 Church of the Assumption, in Callowhill | Photo: Bradley Maule

The Pennsylvania Commonwealth Court has released its opinion on the case of Church of the Assumption, the vacant church near 11th and Spring Garden Streets, finding that the Philadelphia Court of Common Pleas erred in not dismissing the case after the property was sold to a new owner last year.

The court found the case to be moot because neither the former owner, the non-profit Siloam Inc., nor the new owner, John Wei’s MJ Central Investment, intervened in the appeal that was brought to Commonwealth Court by the Callowhill Neighborhood Association.

The order vacating Common Pleas Judge Idee Fox’s October 2012 decision in favor of Siloam–which reinstated the Historical Commission’s demolition approval that had been reversed by the L&I Review Board–would appear to require Wei to file a new hardship application to demolish the church.

The court order remands the case to Common Pleas to dismiss Siloam’s appeal “without prejudice to the new owner’s right to seek a demolition permit for the Church,” Commonwealth Judge Rochelle S. Friedman wrote. The Court of Common Pleas must now implement and determine the ramifications of the higher court’s order.

Only Andrew Ross of the City’s Law Department filed a brief opposing the appeal and defending the Historical Commission’s initial hardship finding. Interestingly, both sides argued that the case was not moot, though for different reasons: CNA claimed the hardship ruling given to Siloam was made in error, while the City argued that the hardship ruling followed the land and was applicable to any owner.

Due to the finding of mootness, the court’s opinion does not touch on the merits of the hardship appeal itself. It also does not comment explicitly on the validity of the demolition permit that was granted to Wei in November 2012. Wei’s permit was blocked in February by a stay of demolition imposed by the L&I Review Board, which remains in effect as of today.