With Both Expanding, Can Recreational And Industrial Uses Coexist On The Delaware? 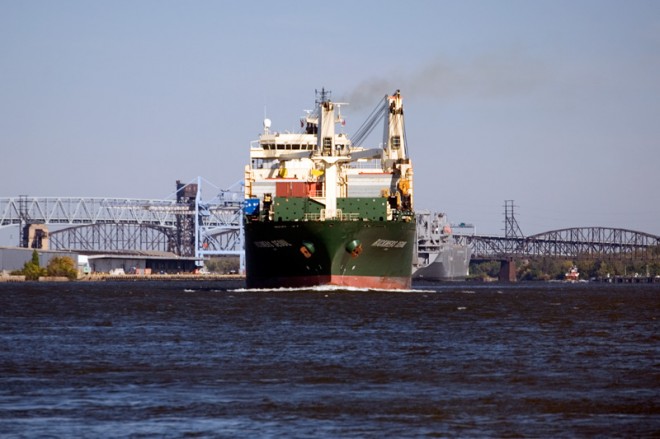 There is–or was, he hasn’t been posting much lately–a regular contributor to the conversations on Philadelphia Speaks and its predecessor, Phillyblog, who harbored nothing but utter contempt for Penn Praxis in general, and the Delaware waterfront planning in particular. He assumed that Praxis’ waterfront planners had written off the Delaware as a major working port; after all, the overall waterfront vision was to connect the river’s edge to adjacent neighborhoods with new parks, public spaces, trails, and residential and retail buildings. And those visions that now make up the Plan for the Central Delaware are slowly becoming reality. Last week and this week, officials announced substantial progress on Penn’s Landing design and the funding for smaller public spaces and trails. 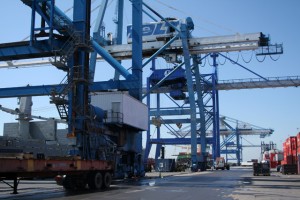 When it comes to the central waterfront, the plan makes sense for a reason that critic never quite grasped: maritime shipping has changed dramatically since the turn-of-the-century finger piers were built, and the central Delaware’s role as a port, like that of the Hudson in New York, much of Boston Harbor, and the bayfront in San Francisco, has come to an end because of that (of the central waterfront’s finger piers, only Pier 38, near Christian Street, is still used for port activity). The best thing that can be done with such spaces is to reconnect them to nearby residents with housing, parkland, and appropriately scaled commerce.

Yet business at the Port of Philadelphia is growing: 2013 is likely to be the fourth straight year of double digit cargo growth and plans and significant state funding are in place for expansion south of the Packer Avenue Marine Terminal for a new Southport Marine Terminal adjacent to the Navy Yard. So it troubled me too that planners hadn’t explicitly acknowledged the breadth of port activity in the public conversation about the future waterfront.

But the Plan for the Central Delaware does: the Delaware riverfront north of Lehigh Avenue and south of Oregon Avenue, it says, is and will remain working port space. And just before he took to the podium at a September news conference at the Packer Avenue Marine Terminal, Philadelphia Regional Port Authority executive director James McDermott noted that “the plan has room for everything in it.”

However, the plan envisions eventually claiming the areas immediately adjacent to the port zones for new neighborhoods and public spaces, pressing the two kinds of uses into closer conflict. Moreover, it’s likely that officials will rezone parts of the Navy Yard, whose first hotel will open next year, for residential use. And there has also been talk of expansion further north in the past, most notably for building a terminal for ships carrying liquefied natural gas near the Tioga terminal. Can these disparate uses really coexist side by side?

In contrast to New York, Boston and San Francisco, the working and citified waterfronts in Philadelphia today are not neatly separated. The Tioga Marine Terminal on the north and the Packer Avenue Terminal on the south bookend the recreational waterfront. Adjacent to the Tioga Marine Terminal in Port Richmond, as Hidden City reported last year, residents already contend with truck traffic and air pollution.

But what happens when small pleasure craft and big ships meet in the same relatively confined space on the river itself? The 2010 accident in which a barge ran into a stalled Ride the Ducks boat, killing two tourists, offers one cautionary example. 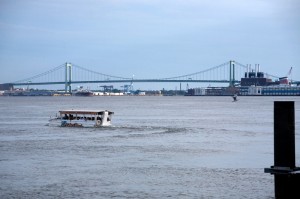 Avoiding such collisions and catastrophes is also part of the plan, said Karen Thompson, planner and project manager at DRWC. “There has been boating and kayaking on the Delaware since before there was a master plan. But because the Delaware is a working river, the opportunities for recreational boating were limited,” she said. The shipping channel’s close proximity to the Pennsylvania riverbank poses additional challenges for recreation in and along the Delaware.

The result, said DWRC planner and project manager Lizzie Woods, is that the Plan for the Central Delaware emphasizes on-shore recreation over in-river activities. “The plan is focused on public access to the riverside over recreational activities in the water,” she said. “The plan had a section on activating [recreational] uses for the river, but those activities would have to be carefully monitored and limited to areas where such activities are safe.”

However, the river’s pattern of currents provides some in-water recreational potential. “There are inlets that are protected from currents and other boats,” Thompson said, among them one near Pier 53 and another near Berks Street. Those sites are protected from river current, allowing for the possibility of allowing recreational in-water uses in those places. “This is all part of the planning process, and as we develop each of those areas in more detail, we will look at those issues in more detail. But if we suggest kayaking as a use [for those areas], we will do so only after consultation with the Coast Guard and other parties with an interest,” she said.

As of now, said Thompson, the Plan for the Central Delaware calls for no new in-water recreational zones along the river beyond those already extant, such as the marina area around Penn’s Landing. A facet of the Penn’s Landing design revealed Tuesday night by the landscape planning firm Hargreaves is an in-river pool.

And as for those existing spaces and uses, “there are rules in place for the tidal Delaware that already govern safety,” she said. That duck boat accident, she added, was more the result of a “perfect storm” of unusual occurrences than any inherent conflict between activities. But, she said, the DRWC isn’t advocating for “a massive expansion of recreational use of the river, but building on what’s already there. The Delaware in Philadelphia is not like the Schuylkill or the Delaware up north–it’s not a purely scenic river. But water recreation has always been coexisting with shipping, and there’s no reason why it won’t continue to coexist.”