Theater Of The Undead 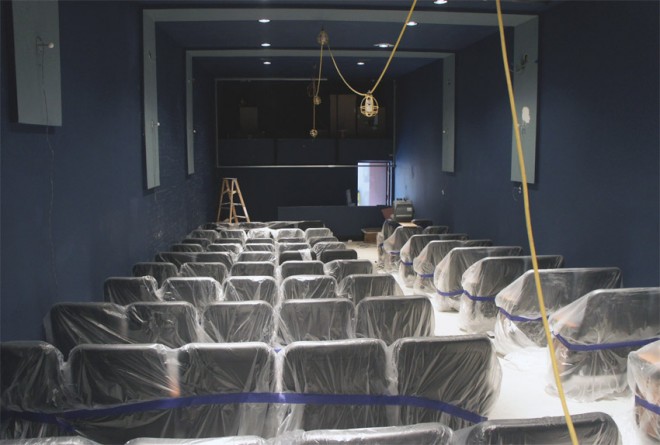 The undead PFS at the Roxy | Photo: Daniel Shurley

When the Roxy Theater went dark around this time last year there were no sweeping pronouncements on the death of cinema. That would have been a bit histrionic in this instance: by the time of its closing the small two-screen theater operating out of two row houses on the 2000 block of Sansom Street had fallen into disrepair, both physically and existentially, screening easily digestible big studio fare better served up in one of the many multiplexes ringing the city. But a third-rate cinema is still cinema in a city with precious little screen space.

Enter the Philadelphia Film Society, whose annual Philadelphia Film Festival, ongoing now, showcases independent and buzz-worthy international films for ten days each October in a patchwork of theaters spread across the city, with plans to turn the cinema into a film center. Now, a year on, with structural renovations and new digital equipment in place, PFS at the Roxy is a month from its official opening, on November 15.

This past weekend film-lovers got a glimpse of the $200,000 renovation still in progress. The finishing touches will come later; the PFS plans to be screening films in its new home even as the dust is settling.

Under the Film Society’s stewardship, the undead cinema has added a digital projector, bigger screens, and a surround sound system. The sweetest part of the deal for film nerds: the Roxy will retain its 35mm projectors and reel to reel system for repertory programming—as well as keep a variable speed projector on hand for screening silent films at the right speeds, the Roxy’s new manager, Alison Silverman, explained. Perhaps the new incarnation of the Roxy holds out the promise of the resuscitation of film culture in Center City. Cinema may have been pronounced dead, but somehow it refuses to die. 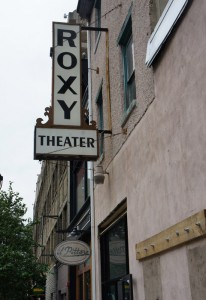 Owing to its small capacity, the PFS can afford to take some curatorial risks. “It’s not a huge venue. I think it’s ideal for showing art house fare, documentaries and experimental films,” the Society’s president J. Andrew Greenblatt told the website Geekadelphia earlier this year. The Film Festival’s reputation for quality and occasionally challenging programming goes a long way in building confidence in the new venture. Besides being the new home of the Film Festival, the Roxy will also anchor the PFS’s diffuse year-round activities. They’ll look to screen midnight movies, retrospectives, and host a monthly series called Filmadelphia, a grant-funded platform for emerging local filmmakers to showcase their work.

Like the revamped theater it houses, Sansom Street is something of an anachronism in the tidily groomed Rittenhouse neighborhood. The 2000 block of Sansom Street in particular harbors the kinds of businesses that are often relegated to the outskirts. Long in the Tooth specializes in new releases on an old medium: vinyl. Fat Jack’s slings comics, and the Classical Guitar Store sells, not surprisingly, six-stringed things of the wooden variety. There’s Helium, a comedy club just intimate enough to ensure that no heckler’s remarks go unpunished. The Adrienne, home of the InterAct Theatre Company, is also small, perhaps even cramped, and it fills up. (A performance space, though, can only benefit from tight quarters.) And if you look close enough you’ll find, tucked between an architect’s offices and a meditation center, the elephant on the block: the Adonis Cinema and Sansom Street Gym, a cruising ground hidden in plain sight. 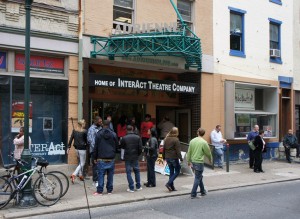 Of course there are restaurants and juice bars as well, but every neighborhood has them. “It’s the entertainment that made this block special,” says John Ciccone, who owns several properties on Sansom, including the Roxy. He has seen the block evolve over the years, and it was his strategic interventions that helped make it the thriving performing arts corridor it is today, a place to see a show, shop and dine, rather than avoid–not a distinction one often attributes to a landlord. As early as 1961, Jane Jacobs observed that the Rittenhouse neighborhood “is the only old neighborhood in Philadelphia which is spontaneously rehabilitating its edges and extending its real estate uses.” The longhairs favored Rittenhouse Square as the site of their love-ins and war protests. Flower power spread to those edges: the now vacant Rittenhouse Coffee Shop once housed a folk club that saw the likes of Arlo Guthrie and Joni Mitchell. Improbably, the Spanish Renaissance revival row house lingers on as a reminder of a time when Sansom Street attracted more of a bohemian contingent than it does today.

After the hippie flowering had faded, Ciccone recalled, the block entered into a doldrums. Urban decay had set in throughout the city. “There was a rough, tough club in there, and there was a neighborhood group trying to get them out,” he said. That’s when he made his first intervention. Ciccone bought the liquor license from the nuisance bar, opened a jazz club called Curtains, and began bringing in prominent touring acts. Crowds soon snaked around the corner to see Sonny Rollins or Stan Getz blow. (Helium now occupies the building where the jazz club had its run.) In 1981, Ciccone “set up the Wilma at the Adrienne.” The celebrated theater group flourished, eventually expanding into its current home at Broad and Spruce when it outgrew its original space.

While performing arts venues have done well, the Roxy floundered in the wake of shifting movie-going habits, but it still managed to persist as a cinema. Its nearest movie house neighbor, the Boyd on Chestnut Street, with its opulent art deco interior, did not. In their history of Rittenhouse Square, Robert Morris Skaler and Thomas H. Keels lament that “almost all of Philadelphia’s great movie palaces from the 1920s were demolished or changed to other uses within a half-century of their construction.” The Gilded Age movie palaces, paradoxically, have proved harder to revive than the modest Roxy. Unlike the Boyd, the Roxy project has not had to contend with historic preservation issues. And unlike the 1920s movie houses that once lined Market Street, the Roxy never turned to porn, a shift that usually signals the terminal stage in the life of a movie house.

Connecting the PFS with the Roxy, a relative tabula rasa of a theater, has been Ciccone’s latest intervention on Sansom Street. He recognized that the block’s profile would be enhanced dramatically with the addition of an independent theater. Bringing a movie house into the 21st century, however, wasn’t going to be cheap. A Knight Arts Challenge of $150,000, won earlier this year, pushed the project along. Greenblatt’s team staged a summer film series to raise awareness about its matching mission, and they crowdsourced another $47,776 via Kickstarter, with 479 backers chipping in an average of around $100 each. 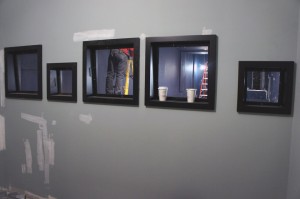 When it made its appeal on Kickstarter in March of 2013, the Film Society had expected it would be screening films full-time by the spring of 2013. But as with any construction in Philadelphia, it hit a few snags. Due to a permitting oversight, work was halted on one of the two lots while the team reapplied to have the neighboring lots consolidated into one. Paperwork in order, the renovations inched forward. Workers blasted through walls to make one building, brought the concrete floors even with one another and raised the ceiling to make room for the bigger screens, PFS’ director of development Rebecca Cain told Hidden City. In the process, the theater lost capacity, scaling down from 140 to around 80 seats per theater, while adding new chairs (cheers!), acoustic paneling for sound isolation (muffled applause), and improved ADA accessibility (polite clapping). After the theater reopens, PFS officials will turn their attention to the front of the house, with plans to refresh the lobby, concessions, lounge and bathrooms and install a new marquee.