The Viaduct At The Heart Of Her Life And Art 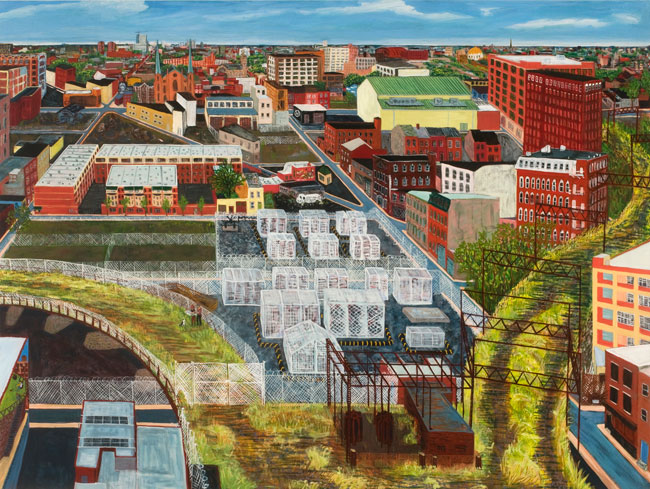 Amidst the precise geometry of the the streets and buildings in Sarah McEneaney’s painting Trestletown, North From Goldtex (2013), the Reading Viaduct stretches out like a limber dog, its thick fox-like tail hugging the industrial landscape. Sarah herself is there, standing on the SEPTA spur (the dog’s neck), as she often is, with John Struble, with whom she founded the Reading Viaduct Project in 2003, and her 12 year old dog Trixie. In the painting, McEneaney and Struble are studying design plans for the spur, which starting next year will become a park, the first hint that McEneaney and Struble’s dream to transform the train trestle, out of service since 1984, will become reality.

The painting is one of 14 that comprise “Trestletown,” McEneaney’s second solo show at Locks Gallery on Washington Square, an homage to the Viaduct and its place in the domestic landscape of the painter’s life. On Friday, Locks will host an opening reception for the show, which runs until November 23, and a panel discussion on the Viaduct, “Rethinking Trestletown,” November 21 at 6PM. 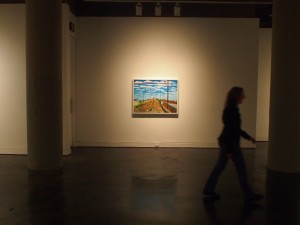 The show comes directly on the heels of the merger of the Reading Viaduct Project and Friends of the Rail Park (the joint organization will be called, going forward, Friends of the Rail Park, though it will retain the decade-long history of RVP), and together, the show and merger allow us to recognize McEneaney for her vision and leadership: without her, there would be no hope of transforming the Viaduct into an imaginative public space. “She is constant, determined, and refreshing,” says Struble.

McEneaney moved to the neighborhood in 1979, after having attended Philadelphia College of Art (now the University of the Arts) and the Pennsylvania Academy of the Fine Arts. She bought a set of buildings that housed the General Wire Products Company at the tip of the triangle formed by Hamilton Street and Ridge Avenue, and turned them into her house and studio. It was the Tenderloin; filmmaker David Lynch, having absorbed enough of the disfigured place, had only recently left. There was no neighborhood association, no local civic life. McEneaney took walks on the Viaduct then, even when it was still in use, and gathered cobblestones from the construction of the commuter tunnel in the early 1980s for her garden. But it wasn’t until the Phillies proposed to build a new baseball stadium at 12th and Vine Streets that neighbors came together. McEneaney met Struble then. They helped form the Callowhill Neighborhood Association and worked together to block the stadium plan. In 2003, the Pennsylvania Horticultural Society brought Joshua David, a founder of the High Line in New York, to Philadelphia to talk about that project. McEneaney and others brought David up on the Viaduct, and, she says, the Reading Viaduct Project “sort of started from there.”

McEneaney’s paintings, says Ingrid Shaffner, senior curator of the Institute for Contemporary Art, follow on the narrative tradition of artists like Frida Kahlo and William Kentridge, “who depict the world in terms of their everyday and intimate experience of it.” McEneaney often paints herself in her house and in her studio, where she explains, the narrative “is told through the paintings within the paintings.” Those narratives often involve Trixie and her cats Cole and Angel; they’re inspired by newspaper articles she clips and from prosaic domestic moments condensed into single pictures. These miniature scenes carry both a simple, naive optimism and ultimately an inescapable quietness that characterizes our quotidian life.

In “Trestletown,” we get to see McEneaney extend her domestic space out into the neighborhood and the city, equally filled with personal, intimate meaning. She often places herself and her house in the landscape, as she does in Trestletown North From Goldtex. “I’m showing where I live in Philly,” she says. 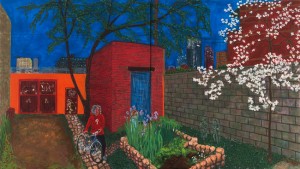 The show itself plays with the artist’s narrative. In the first painting, Twilight (2012), McEneaney, in a Phillies hoodie, is entering her garden from the street, “me looking at myself there,” a perspective that allows all of us to consider our own place in the vast temporal and physical landscapes of the city. Around the gallery, the paintings follow her: through the garden (where a red tail hawk that had been fledged in the shaggy wild landscape of the Viaduct nests in the river birch tree, littering the ground with the uneaten fuzz and bones of its dinner), to the kitchen and studio, and then back out again to the rose light of the neighborhood and the city close in. Always, Sarah and Trixie (and often Struble) are there, and often in more than one place in a single painting, each of these works so grand and so personal all at once.