The Met’s Next Revival? 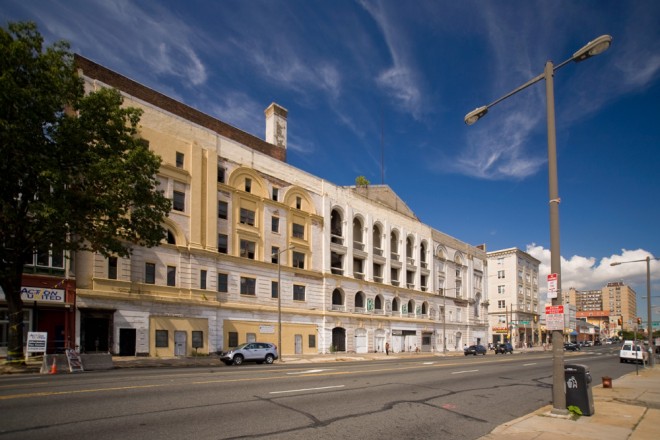 Last October, several reports indicated that Philadelphia developer Eric Blumenfeld had entered into a partnership with the Met’s owner, Holy Ghost Headquarters Church, to redevelop the property. Little has been publicly discussed about the project since then, but Blumenfeld quietly purchased the building in February for $1. According to the City’s Office of Property Assessment, the new owner is Holy Ghost I LP, c/o EB Realty Management, Blumenfeld’s company.

On September 9th, Licenses & Inspection issued a violation for performing interior demolition with no permit info posted. Work appears to have paused following the L&I notice, but a dumpster remains parked on the rear (Carlisle Street) side of the building.

Photos provided to the Hidden City Daily appear to show that demolition work has been confined to the floor and first two levels of the auditorium–the proscenium arch and the rest of the auditorium remain intact, albeit severely decayed. The Holy Ghost Headquarters Church sanctuary appears to have been removed from the auditorium’s ground floor, and a sign posted to the church entrance says that services have been “temporarily relocated” to Ben Franklin High School, four blocks south on Broad Street. 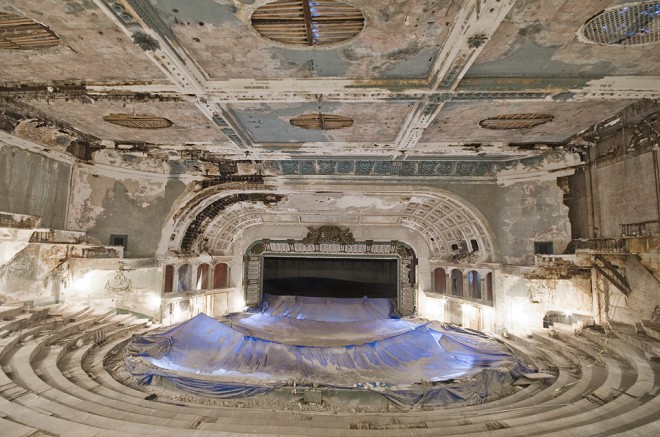 The area under the blue tarpalin is where work had begun | Photo: Chandra Lampreich

EB Realty declined to comment on Blumenfeld’s plans for the Met, however Blumenfeld told Jennifer Lin and The Inquirer last October that, “in the daytime it could be a museum… at night, a concert hall.” With a theater configuration for 4,000 seats, a concert venue seems a reasonable fit for North Broad Street’s second-most visible albatross, after only the Divine Lorraine—which, of course, Blumenfeld also owns.

Blumenfeld’s idealistic vision for North Broad Street is well documented, and between his 640 North Broad and Marc Vetri’s Osteria and Alla Spina, and Stephen Starr’s nearby Route 6 and catering hall, small steps are moving that vision forward. Between Temple’s declaration of a new North Broad Street at Morgan Hall, the Convention Center’s expansion and PAFA’s Lenfest Plaza across the street, and the possibility Blumenfeld’s buddy Bart Blatstein is awarded the city’s second casino license to develop The Provence at the Inquirer Building, perhaps the steps aren’t so small. 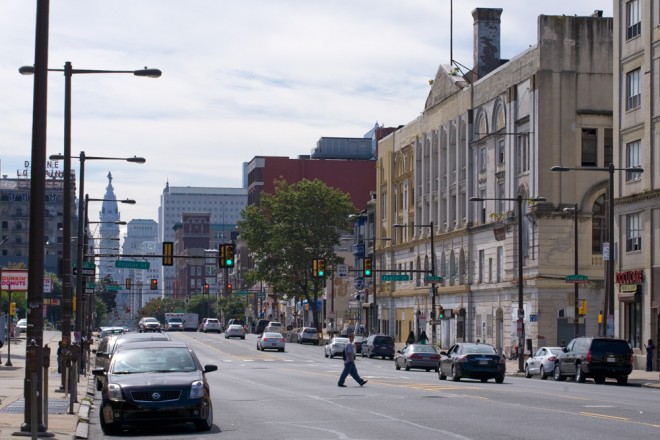 Eric Blumenfeld has been known to take the long view on North Broad Street, seen here from The Met (at right) to City Hall | Photo: Bradley Maule

A reborn Met, one block from the Girard Avenue subway station (at which express trains stop) and trolley, five blocks south of Temple, and five blocks north of Center City, with multipurpose programming during both day and night, has the potential to spur growth up and down Broad Street, as well as within growing Francisville.

Several attempts to reach the Holy Ghost church and the Francisville CDC were unsuccessful.

The Met has had a star-crossed history from the very beginning. Impresario Oscar Hammerstein, grandfather of the Broadway lyricist, opened the Philadelphia Opera House to rival the Academy of Music in 1908, the ninth such opera house in Hammerstein’s burgeoning empire. Architect William H. McElfatrick crafted the nearly 4,000 seat theater. 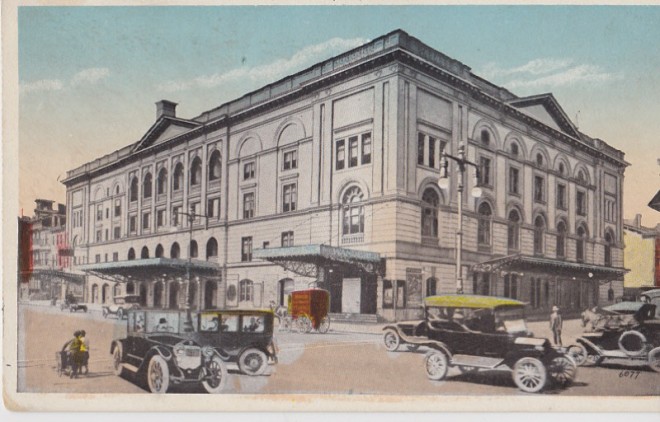 However, after only two years, Hammerstein accrued so much debt that he was forced to sell the facility to his rival, New York’s Metropolitan Opera, which renamed it the Metropolitan Opera House. The Met remained there for ten years, after which the building underwent a number of transformations, from opera house and movie theater to concert venue and sports arena, before becoming a church in 1954.

It has officially been known as the Holy Ghost Headquarters Revival Center at The Met since 1996, when Reverend Mark Hatcher and his congregation raised the funds to repair the building, which had been declared imminently dangerous by L&I.

At the inaugural Hidden City Festival in 2009, the Group Motion Dance Company activated the old hall with a performance of Wally Cordona’s Revival. The Met was added to the National Register of Historic Places in 1972.

Matthew Lambros, the subject of a profile yesterday in the Daily Mail (UK), toured The Met’s interior recently and posted photos to his site After the Final Curtain.