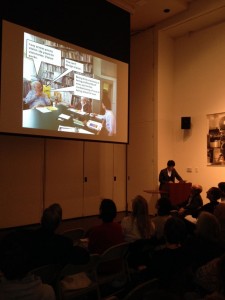 People attending Wednesday night’s lecture by Shohei Shigematsu at the University of the Arts looked a bit befuddled. They had come to see a prominent architect play the role of “preservation provocateur”–the first in a series of such talks funded by the Pew Center for Arts & Heritage and hosted by the university and the Center for Architecture as part of their Gray Area project. What they got was a review of works by OMA, a firm led by Rem Koolhaas and five other partners, including Shigematsu. The portfolio was striking. Unabashedly modern, it included such projects as Milstein Hall at Cornell (a cantilevered slab with Corbusian and Miesian roots), the Marina Abramovic Institute for the Preservation of Performance Art in upstate New York, and the colossal, controversial CCTV headquarters in Beijing. But where did preservation enter in? The answer was that it did not–at least not beyond serving as an ominous caricature, fit for shadowboxing. And yet it was hard to shake the impression that Shigematsu was himself a preservationist of sorts.  Therein lay the befuddlement.

OMA bills itself as “a leading international partnership practicing architecture, urbanism, and cultural analysis.”  It was in the latter capacity that Koolhaas and Shigematsu indicted the preservation field in their 2011 “Cronocaos” show at the New Museum. As architecture critic Nicolai Ourousoff wrote then in the New York Times, “[Koolhaas] paints a picture of an army of well-meaning but clueless preservationists who, in their zeal to protect the world’s architectural legacies, end up debasing them by creating tasteful scenery for docile consumers while airbrushing out the most difficult chapters of history.”

That same bumbling, hegemonic creature lurked around the edges of Shigematsu’s talk. There were graphics tying preservation to global economic development (ironically, the exact opposite criticism was recently leveled at the field by urban historian Kenneth Jackson) and others supposedly illustrating preservationists’ special loathing for buildings of the 1960s and 1970s, when “architecture as a social project” flourished. Had these themes been fleshed out, it might have been worth countering that, far from being derided, late-modernist buildings now occupy the popular and academic center of the preservation movement. Groups such as DOCOMOMO have local, national, and international branches. That same zeal has also animated the architecture profession for the last decade or so. It gives some of OMA’s own work a decidedly nostalgic cast. 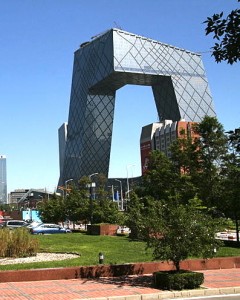 Perhaps the deepest irony came as Shigematsu described his firm’s thoughtful renovations of existing buildings. Old surfaces were spared; old layers revealed. Even Milstein Hall, for all its icy bravado, throws the adjacent, classicizing Rand Hall into flattering relief. While bashing preservation may be fashionable (preservationists themselves now routinely bridle at the label), Shigematsu’s talk underscored the extent to which preservationist ideas and commissions have become part of the 21st century architect’s bread and butter. And perhaps that was the point. Perhaps, in their public presentations, Shigematsu and Koolhaas are simply chafing at the cultural, legal, economic, and site-based constraints in which their business must operate. But this is the architecture profession’s oldest and most romantic cry: “I am an artist!  Grant me liberation!”  It has echoed down the halls since the days of Frank Lloyd Wright and his doppleganger, Howard Roark. And yet, as OMA’s work demonstrates, those very constraints can inspire wonderfully elegant and creative solutions. Lift them and you may have a masterpiece…or CCTV.