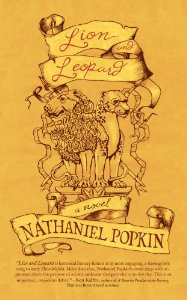 The journey that has been Hidden City senior editor Nathaniel Popkin’s first novel arrives at its destination in a launch party this evening at the Pennsylvania Academy of the Fine Arts. Philadelphia’s The Head and the Hand Press officially releases the novel, Lion and Leopard, today, some five years after his first public reading from the book at Philadelphia University, where he was then writer-in-residence.

Lion and Leopard employs Popkin’s exhaustive research in a historical fiction context, pitting artists John Lewis Krimmel, a German immigrant, and Charles Willson Peale, the established early portraitist, against one another in the burgeoning American art scene. The clash, between the establishment (Peale, one of PAFA’s founders) and the wily iconoclast, echoes perfectly through PAFA’s halls today.

The KAWS @ PAFA exhibition stirs this very sentiment by placing the street artist KAWS’ cartoonish fiberglass figures against PAFA classics such as Benjamin West’s “Death on the Pale Horse” and John Vanderlyn’s “Ariadne Asleep on the Island of Naxos.” This juxtaposition, while wholly coincidental, is not lost on Popkin, who will visit the topic during a special tour of the PAFA galleries prior to a reading and book signing this evening. The tour will feature much of the art central to the novel’s development, including the works of Peale, Krimmel, Edward Hicks, and others.

The gallery tour with Popkin and a PAFA staff member begins at 5:30, is $40, and includes a copy of Lion and Leopard. Please see the registration page HERE. The reading and signing only, however, are free, and begin at 6:30. That registration page is HERE.

Lion and Leopard is Popkin’s first novel, but it’s his third book, following Song of the City (2002) and The Possible City (2008).