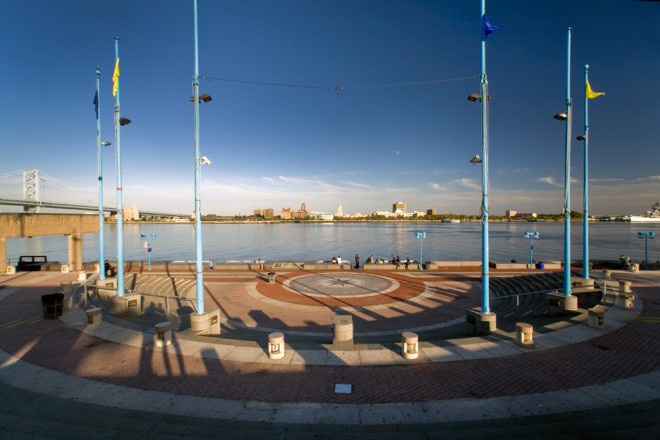 This evening at 7, the next look of Philadelphia’s central riverfront goes public at a big reveal hosted by the Delaware River Waterfront Corporation. With a program that includes remarks from Deputy Mayor for Commerce and Development Alan Greenberger, PennDesign Dean and DRWC board member Marilyn Jordan Taylor, and Hargreaves’ Senior Principal Mary Margaret Jones, plus a Q&A moderated by Taylor, the public will get to see the first results of the design discussion they helped steer.

Hargreaves, hired in April by DRWC, will present renderings of specific focus areas between Market and South Streets, including continuing the cap over I-95 between Walnut and Chestnut, over Columbus Boulevard toward the river’s edge, a new pedestrian bridge over Columbus at South Street (continuing the one over I-95 with the sculpture Stroll), reimagined public space around the Penn’s Landing Marina, and conceptual development plans for the current surface spaces between Market and Chestnut Streets.

Not a bad party for William Penn, who would have celebrated his 369th birthday yesterday were he miraculously still alive. There are no early indications how Hargreaves intends to incorporate the giant concrete pi that the Delaware River Port Authority built as the western landing for a tram to Camden when that was apparently a good idea. Hopefully, the 1995 statue of Penn-era Lenni-Lenape leader Tamanend by Raymond Sandoval, currently relegated to the on-ramp of I-95 at Market Street and obscured by trees, street lamps, and the Market Street/Penn’s Landing flyover, will be relocated to a more visible site.

PLEASE NOTE: the meeting about Penn’s Landing is not at Penn’s Landing, but at Festival Pier (601 N. Columbus Blvd). The program begins at 7pm. For more info, see DRWC’s page for the event HERE. 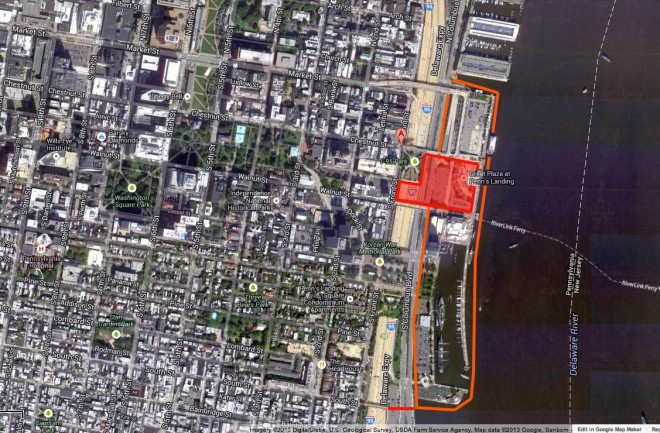 The red areas present two additions as part of the new Penn’s Landing — the upper a cap over I-95 and Columbus Blvd, the lower a new pedestrian bridge at South Street; the orange lines indicate the focus area | (Google Maps) 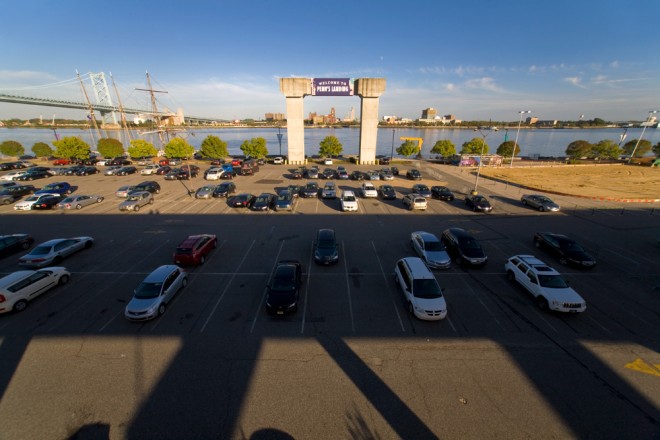 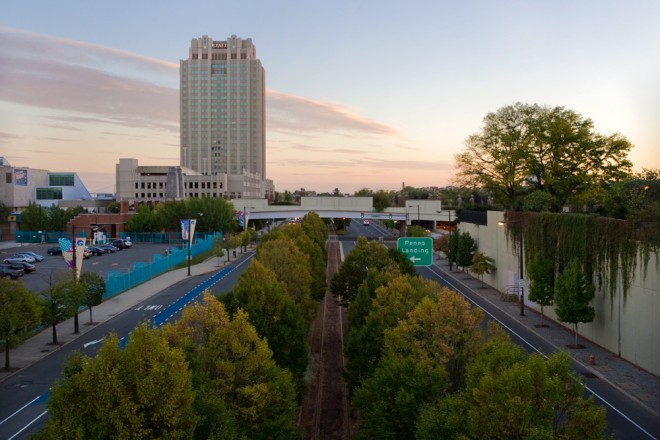 This southerly view along Columbus Blvd will be capped as part of the DRWC/Hargreaves plan for Penn’s Landing | Photo: Bradley Maule 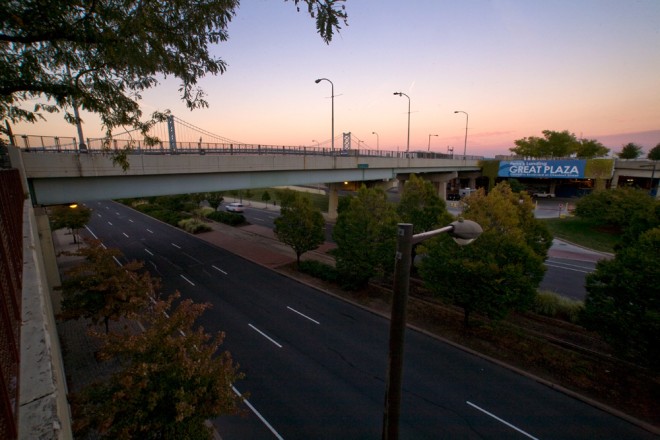 The same view, looking northeast toward the Ben Franklin Bridge, where a cap over Columbus Blvd will create public space between Walnut and Chestnut Streets, sloping toward the Delaware River | Photo: Bradley Maule 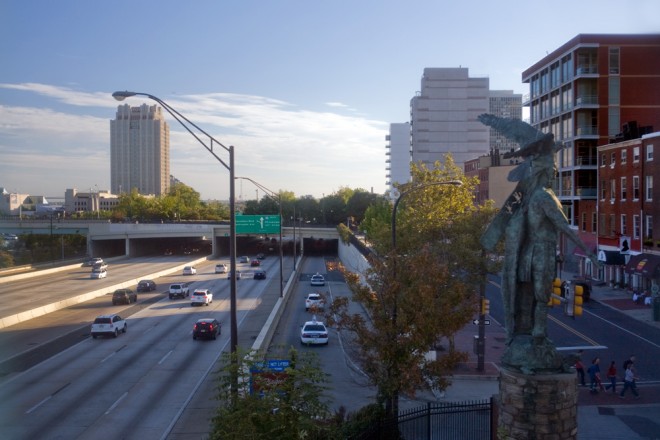 Raymond Sandoval’s sculpture Tamanend depicts the Lenni-Lenape leader atop a turtle and with a wampum-carrying eagle on his shoulder, is backed up against I-95, sorely obscured from public view | Photo: Bradley Maule 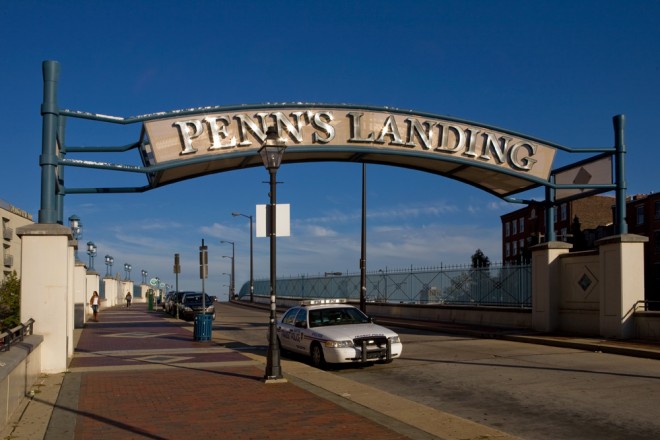 The photographer was upset that the street lamp abuts the “Penn’s Landing” arch too, but it was the best angle for the sunburst glints on the sign | Photo: Bradley Maule 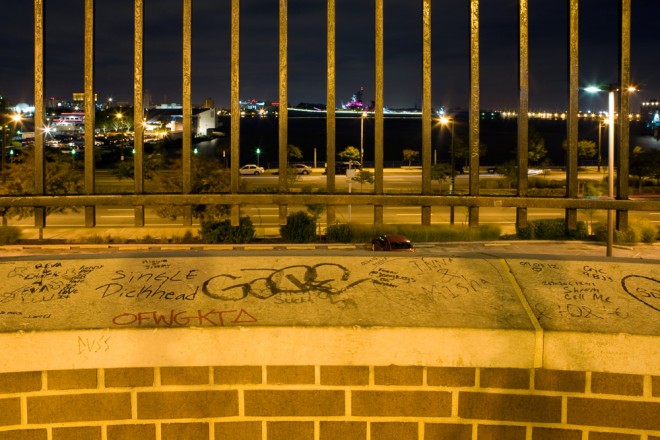 Path to the Delaware, behind bars. This view, at South Street looking to the USS New Jersey across the river, will soon include a bridge carrying pedestrians over Columbus Blvd