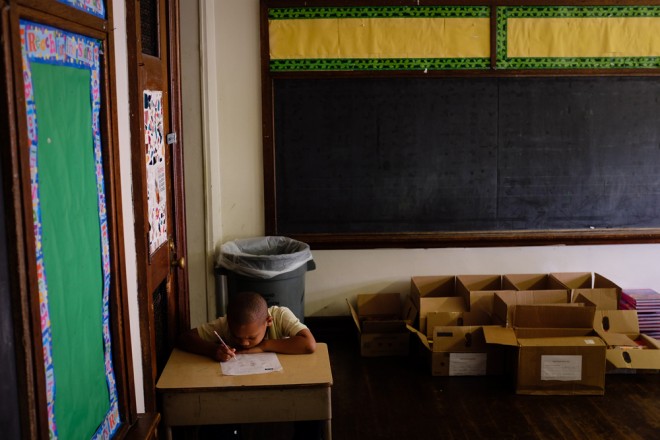 It started online. After a call by photographer Zoe Strauss via her Facebook page, a number of photographers from around the city began working together as Philadelphia School Closings Photo Collective to document the last days of the 24 public schools around the city which closed at the end of the 2013 school year. One of the photographers who responded was Katrina Ohstrom, who had been working independently to document school closings. (Note: Ohstrom is a contributor to Hidden City. We published an interview on the occasion of her work being displayed at Temple Contemporary in September 2012 in conjunction with a panel discussion on the state of public school in Philadelphia held there; see also her photo essay of Bok Tech, the South Philly high school which closed with the others in June.)

Ohstrom recently completed a fellowship with Jacobin magazine documenting school closings in Chicago. This week, she curated an exhibition of photographs by members of the collective that opens to the public this evening at the Scribe Video Center 4212 Chestnut Street, 3rd floor, at 6PM.

Hidden City spoke with Ohstrom about the collective and the works on display at Scribe. 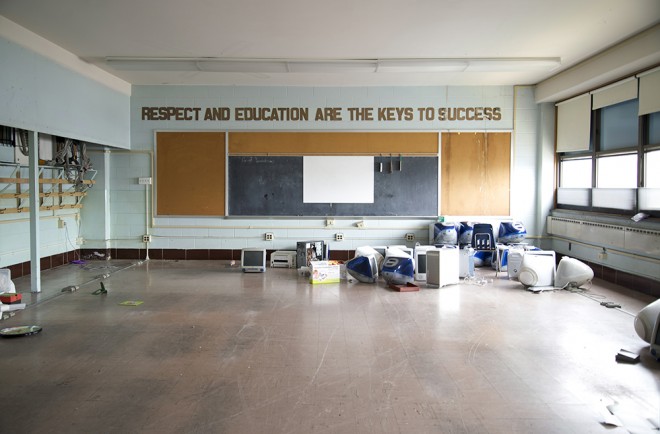 How did the Philadelphia School Closing Photo Collective form and how is it organized?
The Philadelphia School Closings Photo Collective came together last spring. Photographer Zoe Strauss put out a call on Facebook asking for the public’s help in documenting the two dozen schools that were closing. The group (which is open to the public) currently has nearly 200 active members and supporters. One collective member, Michelle Schmitt, created a website that links with Flickr so that if you upload and tag your photos on Flickr, they are collected and searchable on the website, to keep things archived and organized.

Do members meet up in person or does it exist purely online?
For the most part, the collective has existed online. Some members have been meeting in person to work on a photo essay and I’ve been working closely with Melissa Holman on putting this show together, but I’ve personally never met most of the people involved (aside from people I knew already). I know that a lot of us are really excited to meet the other members at the opening on Wednesday.

What kinds of people are members of the collective? Professional photographers? artists? teachers?
The members of the collective run the gamut from professionals with expensive equipment to hobbyists with iphones (there are even some iphone photos in the show). In addition to creating an amazing body of work, this project has been a really successful experiment in democratizing documentation. 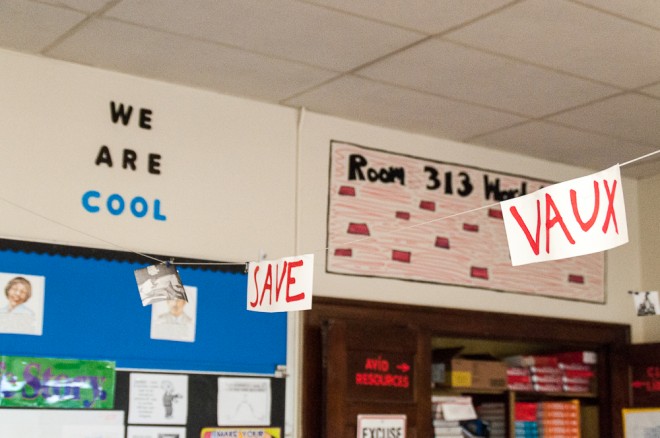 What sparked your initial interest in documenting these schools?
I began photographing abandoned schools and those in the process of closing several years ago, as part of a larger body of work exploring the impact of vacant buildings on their surrounding neighborhoods. These images can be powerful tools for eliciting emotion, either alone or alongside writing, but it’s important to me that the issue of school closings is viewed holistically.

The reality is that this budget crisis has been engineered. Consider the amount of taxpayer money that is being spent on new prison construction and expansion, tax abatements and neovouchers. In Kensington right now, the D3/Oxford Mills project is a glaring example of the connection between taxpayer subsidized “free market” school reform and real estate development. There is no budget crisis. The money is there; it’s just not being spent on public education.

It’s crucial to document the closings of these schools, and I think the collective is doing a fantastic job. But, with my own personal work, I’m aiming to capture the issue in a wider angle. 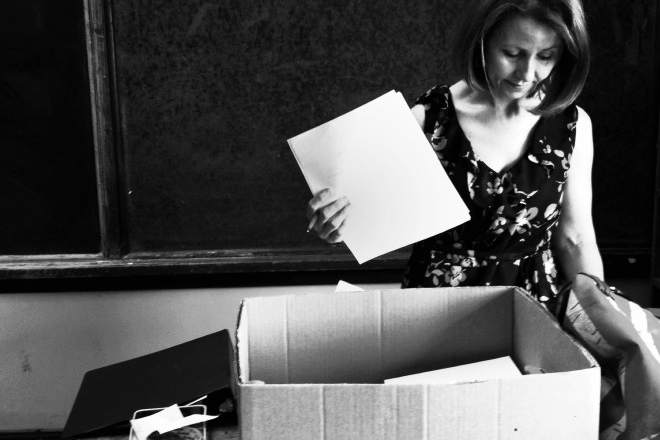 I’m wondering what your goals are for the collective, perhaps both in its role as documentation of a very specific moment, but also what kinds of social or activist goals the group overall might harbor.
I think this exhibition is a really awesome step toward the collective sharing their archive with the public. I can’t speak to the political goals of other members but I would hope that people want to continue their work documenting the neighborhoods where schools closed this year as well as whatever happens in the future.

The collective has already functioned as an image bank, connecting publications like the Notebook and Hidden City, and groups like the Media Mobilizing Project with photographers to provide visual content. Photographs by several collective members also appear in Goodbye to City Schools, one of the documentaries being screened at the opening this wednesday.

Tell me about the exhibition at Scribe. How did you choose the photographers and works to be displayed?
A call for submissions went out to all collective members, ten responded, submitting five images each. All of the photographers are immensely talented and it was difficult to select what would end up on the walls. In the end, I chose 2-4 images from each member, representing many of the schools that closed in a variety of ways (teachers, students, empty hallways, piles of boxes, etc). 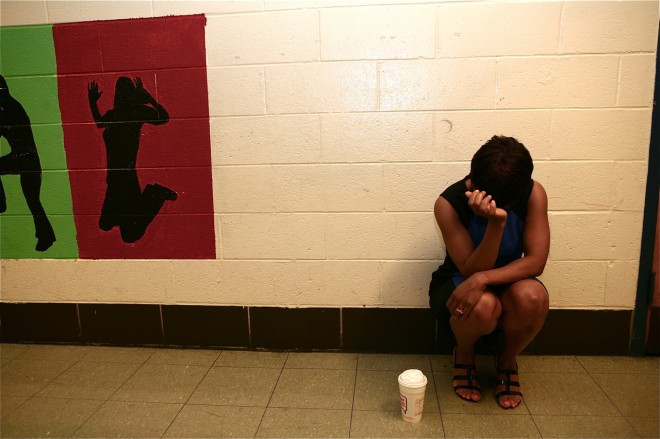 I feel so much pain while looking at many of these photographs, like the heart-rending photo by Harvey Finkel’s of the principal of Fairhill doubled over in the hallway. Are there any positive stories or moments that you might be able to share as part of this project?
The issue of school closings has rallied the public and brought the Photo Collective together, but aside from meeting some wonderful and talented people, the future of public education looks pretty grim.

With the new school year begun how might the Philadelphia School Closing Photo Collective evolve going forward?
I think the work of the Photo Collective will evolve in order to document the evolving education crisis. I’m also hoping to see more relationships form between the collective and other organizations and publications, like our recent collaboration with Apiary Magazine.