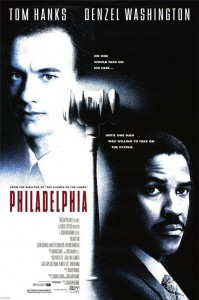 Philadelphia in 1993 was, by many accounts, a grim place. While the Phillies’ lovable band of throwback players marched toward the National League pennant, the city struggled with so many scars of economic collapse. Across the street from City Hall, One Meridian Plaza stood charred from the fire that ravaged the building and took the lives of three firemen two years prior. It was this Philadelphia that hit the big screen in Jonathan Demme’s eponymous film starring Tom Hanks and Denzel Washington, the first major Hollywood movie to take on homosexuality, homophobia, and AIDS. The 22nd annual Philadelphia Film Festival, which began last night and runs through the 27th, will host a screening of Philadelphia next Tuesday, at the Prince Music Theater. Not coincidentally, this year’s Bella Vista House Tour, taking place this Sunday, features a stop at the 10th & Bainbridge loft that was home to Hanks’ Andrew Beckett.

Hanks won the Oscar for Best Actor in a Leading Role that year, one of two Academy Awards the film garnered. The other went to adopted Philadelphian Bruce Springsteen, a Best Original Song for “Streets of Philadelphia.” (Incidentally, Neil Young’s equally sombre “Philadelphia,” from the film, was one of the other nominees.)

The haunting sobriety of 1993 Philadelphia is echoed in Springsteen’s short but poignant song. Peaking at #9 on the Billboard Hot 100, “Streets of Philadelphia” would be Springsteen’s last top ten single (to date), following hit after hit in the 1980s. Having burned out from the success and excess, Springsteen broke up the E Street Band in 1989 and turned inward. He toured the resulting well of creativity in 1992-93, during which time film director Jonathan Demme asked him to write a song for the film. What he turned around sounds stripped down, because it is stripped down: no Clarence Clemons sax solo, no Danny Federici organ fill, no pounding Max Weinberg snare. It’s just a subtle drum machine, a funereal keyboard, and the 44-year-old Boss, well past quittin’ time, and it’s perfect. It’s hard to tell whether the song is more depressingly beautiful or beautifully depressing. But it definitely is both of those things. 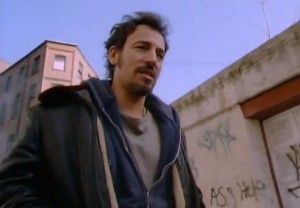 Ted Demme, Jonathan’s nephew whose early career at MTV we can thank for Yo! MTV Raps and blame for Denis Leary, joined his uncle to co-direct the music video. For the video, Springsteen did not lip sync, but employed a small, hidden microphone into which he sang live to an instrumental version of the song while being filmed. (His pronunciation of “Phi-la-deelph-ya” is distinctly east coast, a dialect perhaps intentionally halfway between Freehold and Fishtown.)

Indeed, the streets of Philadelphia are Springsteen’s costar in the video. Filmed in the fall of 1993, Springsteen exercises a Rocky II like dexterity to cover ground in Center City, Independence National Historical Park, Northern Liberties, South Philly, the Barrio, Rittenhouse Square, and finally, the Camden Riverfront, in under three minutes.

“Streets of Philadelphia,” the first song Springsteen wrote specifically for a film, carried his success into another decade. He performed the song at the same Academy Awards at which he won his Oscar, and encored it at the 1994 MTV Video Music Awards and the 1995 Grammys. In the twenty years since its release, the song has been covered by dozens of artists, including hometown heroes Marah’s rollicking romp, David Gray’s slow build, Richie Havens’ favored folk, Tori Amos’ signature screech, Casiotone for the Painfully Alone’s overt lo-fi, Gregorian’s out-there choir thing, and earlier this year, Sir Elton John, who stays close to Springsteen’s original before taking off on an impressive piano solo. It’s also been recorded in Catalan, by Luis Eduardo Aute (“Els Carrers de Filadèlfia”) and French, by Patrick Bruel (“Les Rues de Philadelphie”).

Jonathan Demme’s film Philadelphia ends with Denzel Washington’s Joe Miller watching home movies of Hanks’ Beckett as a kid. Miller, whose person grows through the film, joins Beckett’s family in looking back at a simpler past. Watching the film and Springsteen’s video twenty years later, we look back not earnestly at a simpler past, but with a certain consternation and consolation of the city’s growth since.

Philadelphia will be screened at the Prince Music Theater next Tuesday, October 22nd. Click HERE for more info and to buy tickets ($12). Director Jonathan Demme, a longtime friend of the Philadelphia Film Festival, will attend.

Inspired at least in part by the High Noon compilation album on which 27 different artists cover Tex Ritter’s title song from the film starring Gary Cooper and Grace Kelly (her first feature role), what follows is an exercise in endurance. Starting with Bruce Springsteen’s original, here are ten versions of “Streets of Philadelphia” by various artists.