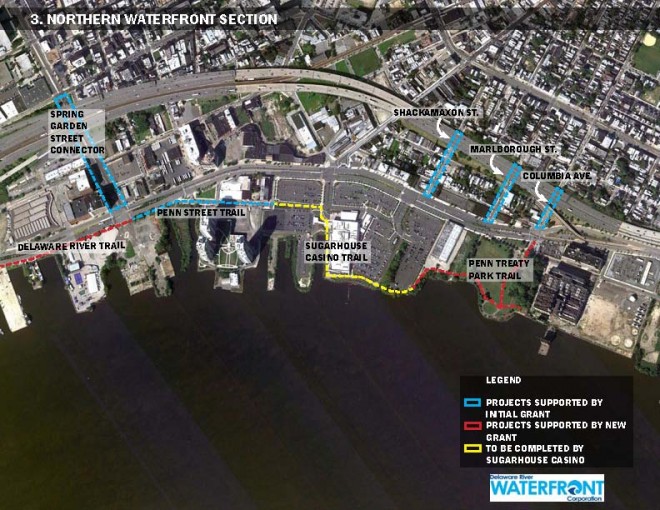 A purpose-built bike and walking trail will connect Pier 68, in South Philadelphia adjacent to the Walmart parking lot, with Penn Treaty Park in Fishtown, thanks to a new $5 million investment by the William Penn Foundation, officials announced today. A key to the plan is the creation of a park at pier 68 and the development of a connector trail around the Sugar House Casino, to be built by the casino beginning in spring 2014. 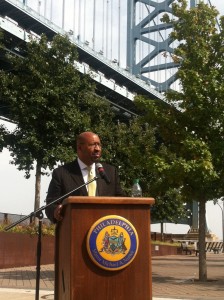 A key to the investments is granting better access to the waterfront, according to both Mayor Nutter and William Penn Foundation interim president Helen Davis Picher. “By investing in our waterfront we are reclaiming an incredible space for all Philadelphians and I would suggest all Americans,” said Nutter. “The waterfront should be a place for people to explore and to exercise and to take in a beautiful sunrise.”

Next week, twelve steps connecting the city and waterfront mandated by William Penn in 1684 will be granted an historic marker. Seizing on that, Picher said that even then, “all Philadelphians whether they did business on the waterfront or not had a right to access it.”

The Pier 68 park and a connector trail along Tasker Street will integrate the waterfront with Pennsport, officials say. The successfully completed connector along Shackamaxon Street in Fishtown will be used as prototype. 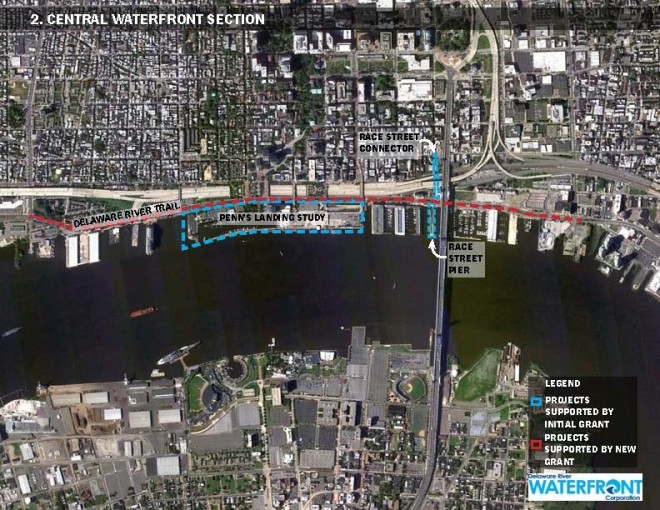 Sections of the trail have been completed over the past few years, including the recently finished connector between Spring Garden Street and the Sugar House parking lot with upgraded signage, lighting, and street furniture thanks to a previous William Penn grant that the Waterfront Corporation was able to leverage for an additional $9 million, mostly from various state departments and the City. That set of funding also underwrote development of the Race Street Pier and Washington Avenue Green. 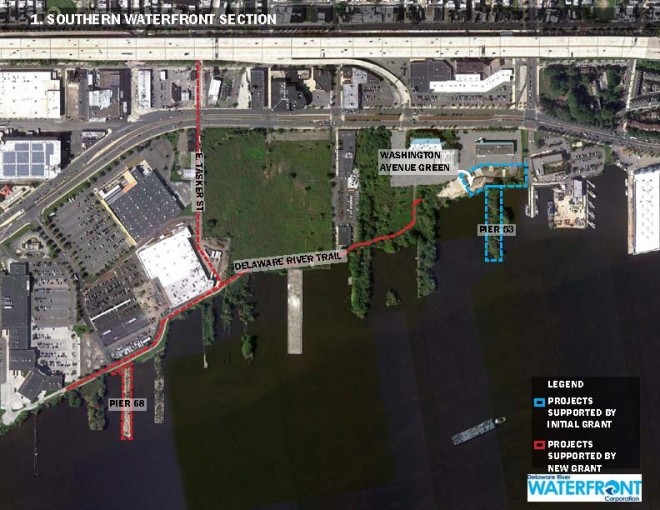 Officials hope to again leverage William Penn’s grant in order to complete the basic public infrastructure of a waterfront trail as the much more ambitious aspects of the waterfront master plan, such as covering sections of Interstate 95, take longer to develop.

“We’re sending a very strong message to others by investing here,” said Nutter. “Building high quality public infrastructure signals to the private sector, the market, builders, and developers in the business community that the waterfront is a place in which you want to invest.”