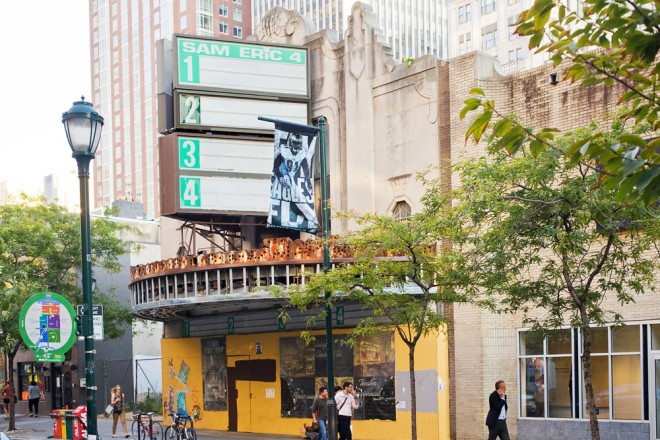 If a proposal announced Tuesday to redevelop the Boyd Theater succeeds where several previous plans have failed, it will come at the cost of the theater’s superb Art Deco auditorium.

According to a submission to the Philadelphia Historical Commission, Florida-based iPic Entertainment wants to tear down the auditorium and build a luxury theater and restaurant complex with eight movie screens and 744 total seats. At the company’s other nine locations in cities such as Scottsdale, Austin and Pasadena, patrons can order food and cocktails from reclining chairs outfitted with pillows and blankets. 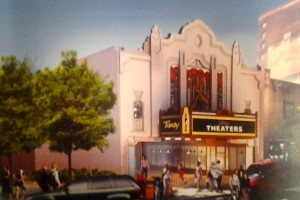 To do so, iPic will need to prove that the property at 1910 Chestnut Street, which is listed on the Philadelphia Historic Register, cannot generate enough revenue to pay for the expense of restoring the building in its entirety in order to receive a hardship ruling from the Historical Commission.

An EConsult report commissioned by iPic estimates the cost of turning the building into a single-screen theater ($41 million), a live venue ($43 million) and an off-Broadway theater ($44 million) would be prohibitive.  iPic’s submission did not disclose the estimated cost of its own plan. The company could not be reached for comment.

The submission also notes that every previous plan to redevelop the property has failed, most recent Hal Wheeler’s proposal to erect a luxury hotel alongside the theater. Wheeler was unable to secure $15 million in state financing, however, and when he died in 2010, his plan died with him.

For Howard Haas, president of the influential Friends of the Boyd advocacy group, demolishing the auditorium would be a tremendous loss.

“The Boyd isn’t going to remain the Boyd just because the façade is still there,” said Haas. Demolition would be “extremely unfortunate,” he said, considering its status as the last of Center City’s great movie palaces.

Haas and three other board members of Friends of the Boyd met with iPic representatives on Tuesday. “They gave us the courtesy of meeting with us but they are determined to do what they have proposed,” Haas said.

The central focus of Boyd preservation efforts has always been the auditorium, the defining experience of the Art Deco movie palace since its opening in 1928 until its closing – most recently known as the Sam Eric – in 2002. Indeed, the theater’s interior has played a pivotal role in shaping the City of Philadelphia’s present-day ability to designate historic properties.

The Historical Commission did attempt to designate both the interior and exterior of the building as historic in 1987, but the owner, United Artists’ Theater Circuit, appealed the City’s Decision to the Pennsylvania Supreme Court and won. 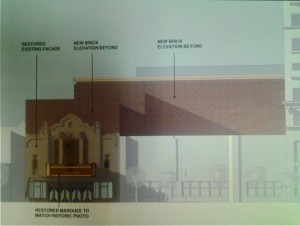 Rendering from iPic submission to the Philadelphia Historical Commission

The Court initially ruled that the City’s entire designation ordinance violated the “takings clause” of the Pennsylvania Constitution, which is modeled on the Fifth Amendment to the U.S. Constitution forbidding government taking of private property without just compensation. However, after public outcry and a request to reconsider, the court found the designation ordinance was not unconstitutional, but invalidated the Boyd designation as excessive because it had included the interior of the theater.

The theater remained unlisted until it was finally designated, this time with little tension, in 2008. Yet despite several public restoration campaigns, and inclusion by the National Trust for Historic Preservation on its annual Endangered Properties list, the Boyd’s reopening has failed to materialize.

In 2009, City Council enabled the Historical Commission to designate the interiors of historic properties.

However, Haas told Hidden City that designating the Boyd’s interior was never pursued by the Friends of the Boyd due to the concerns of interested developers, even those who sought a faithful restoration.

“Every developer would say if the entire interior is protected, it would be too complicated, too expensive to have the required meetings & hearings with the Historical Commission for every detail,” he said.

To date, only two interiors – that of the Family Court Building on Logan Square and the City Council chambers of City Hall – are formally protected.

The Historical Commission has not yet reviewed iPic’s submission to determine whether or not it is complete and is ready to be reviewed by the Committee on Hardship.