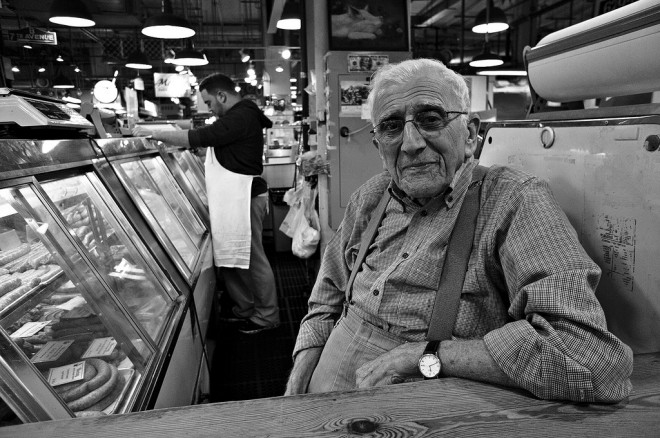 Editors Note: Farmer’s markets, with their pyramids of tomatoes and striped bass on ice, have always attracted photographers. But what’s really interesting about these places isn’t the produce that’s illustrated a thousand guidebooks, it’s the people. Fortunately, that’s where former Assistant District Attorney Alan Barr has been pointing his camera for the better part of a decade at Reading Terminal. He recently spoke about documenting the denizens of the market with Hidden City co-editor Peter Woodall.

Peter Woodall: When did you start photographing Reading Terminal?
Alan Barr:In 2003 I had taken a class at the Maryland Institute College of Art on documentary photography and focused on an open air market in Baltimore and I think Reading Terminal kind of became a subject around that time.

PW: How do you approach photographing inside the market?
AB: Different street photographers have different techniques. I’m not one of those folks that stakes out an area and just kind of hangs around. I start walking and if something catches my eye, you know, I’ll make an exposure and keep walking. Each day I try to encounter different places along my routes and different people. What I’m most focused on now is looking for interactions among people and that’s kind of the thing that catches my eye.

PW: I was going to ask you whether you’ve changed your choice of subjects or style over the years.
AB: I think they have changed. I’ve gotten more discerning about what I photograph. I’m much more focused on getting in close and again, I take far fewer photos of individuals now. I’m really looking for people interacting with one another.

PW: Some of your shots look like formal portraits. Do you ever ask people if you can take their picture or do you just go ahead and shoot?
AB: Verbal communication happens very infrequently. It’s just a matter of if I can stop for a little longer than a millisecond so I can compose or even take several images. That’s all to the better. 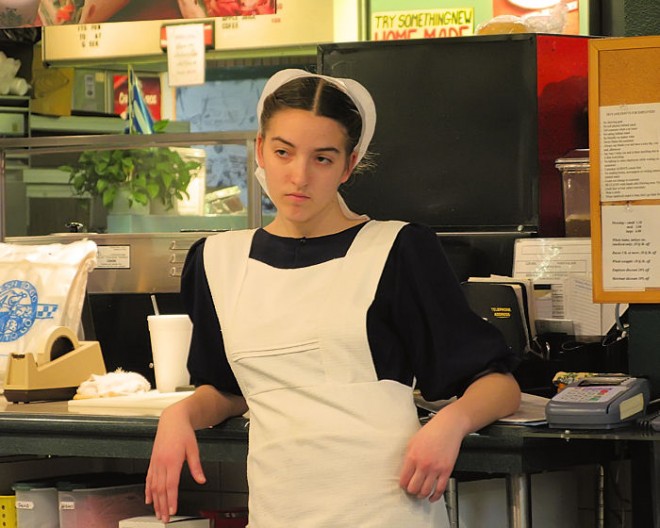 PW: I’m sure that people sometimes see you taking their picture. What is their response?
AB: Most people don’t mind at all–that’s one of the things about being in the market–you know you are in a public place. And I haven’t had a real objection in about five years.

PW: What do you find is the value of creating an image of people who are not posing, of these candid shots?
AB: The value, insofar as the market is concerned, is when you go back to a place continually and you photograph a long period of time, you catch the cycles of celebrations, you catch the Christmas crowds, Thanksgiving crowds, conventions. It’s an exercise in documentary photography that allows you to get a sense of what the place is and the people who go through there. And I like to think there is value in that sort of documentary photography. And that’s really what I go for in the market, more than the (Henri) Cartier Bresson one-off photo, where you take one photo one place, then go on to the next place. Those are wonderful to look at, but some of us really like to work one place and when you do that you are able to communicate a sense of what the place is about both to people who go there every day and to people who have never been at all.

PW: I spend a lot of time at Reading Terminal, yet when I look at your photos, I’m able to see a different market than the one I see when I’m there shopping. It’s a way to check cross reference or check my own impressions versus what your camera has seen.
AB: Yes, If you were to photograph, you would come up with a different take–because obviously editorial eye will see different things.
PW: Absolutely, but at the same time, given the sheer quantity, when you look at them all at once, you can’t argue that’s not a significant portion of what the market really is.

AB: Every person has their own idea of the market–that’s the wonderful thing about Reading Terminal. We live in our own neighborhoods in a city that is stratified, there are racial lines there are economic lines there are some ethnic lines, where are the places where all of the places where the people who live in all of those little markets come out and interact? One of those places is Reading Terminal. You kind of check your labels at the door and you are interacting or at least participating with a much broader spectrum of people than you get to in most of your life outside of that venue.
PW: Right. A few years ago I went to San Francisco’s Ferry Terminal Farmer’s Market, and I remember being a little disappointed with the Terminal when I came back, that the food here wasn’t as interesting or exquisite. But then at the same time it was more authentic, democratic. There wasn’t much regular folks could afford in San Francisco. 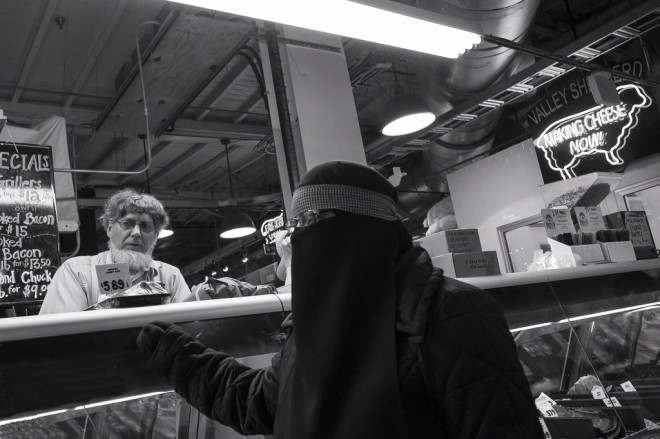 AB: You can find high end stuff but you kind the stuff people look for every day. Iovine’s is a wonderful greengrocer. There are a few less butchers than there were, but you can still get a fresh cut meat, there are still the staples. You’ve got people who make that their supermarket and you’ve also got stalls that appeal to visitors, or convention goers. So it serves a very broad swathe of people.

PW: Have you gotten to know anyone?
AB: I’ve gotten to know a few of the merchants on a nodding basis. There used to be a butcher shop–there was an old guy there who used to sit and talk with folks—and I got in a nodding basis with him. You do encounter folks, but there aren’t many people who know me. My focus is photography, until its time for lunch and then it’s more photography.

PW: Do you have a favorite place in the market?
AB: You have to be fascinated by the Amish/Mennonite run stands. They provide something visual that is out of the ordinary plus fabulous baked goods and pickled okra. Iovine’s is a wonderful place for the variety an the freshness. I don’t know that I’ve gotten many great photos there but it seems to fascinate me. So at two ends of a diagonal line are the places I would call my favorites. It’s just a fascinating place to be. When you go someplace, you hope you get some decent photos, but if you can enjoy being there, how much better is that? There are a couple new sausage makers, new places come in and there is change, so you want to be around to see that.

PW: Absolutely, I think it is more dynamic than people realize.
AB: It is–I don’t know what the master plan of the market is. I read that one cheesesteak maker got forced out who was friendly with the Amish merchants, they protested that, and one of the name brand cheesesteak folks was supposed to come in but I guess that didn’t happen, so some of the change is part of a marketing strategy and part is the natural cycle of any economic place where there is exit, there’s entry. Even within businesses, they change their ways, people work there and move on, while other people work there forever. It is really a very vital place in that regard.

PW: For the photographers out there, what equipment do you use?
AB: I’ve gone back from zooms and SLRS to prime lenses, and these days I’m usually shooting with a Ricoh GXR. It has a 28mm equivalent lens and an APS-C sensor–a bigger sensor than what you get in the portables. I think they discontinued the series, but I’m hoping they revive it. It’s nice and quiet and just a pleasure to hold and shoot with.

PW: Maximum aperture?
AB: This one is has a 2.8 maximum aperture. In the market when I shoot at ISO 1600 that works. The trick is to keep moving until you find someone to photograph then you stop quickly and start moving again lest you get run over by all the folks behind you. Hesitate for a minute for a minute, stop, shoot and go.