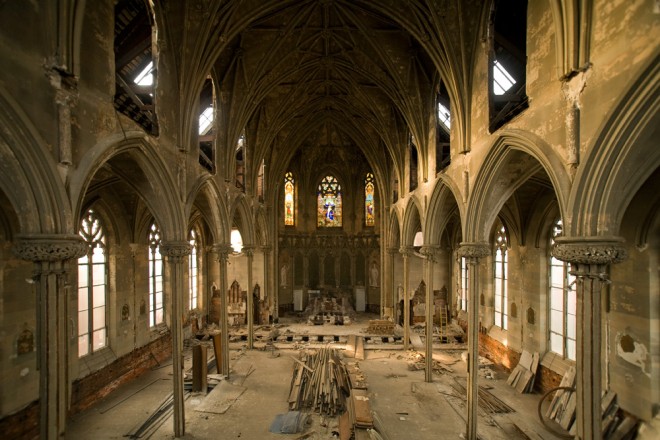 Circa-1848 Church of the Assumption’s interior, photographed circa-2013 | Photo: Bradley Maule

The Commonwealth Court of Pennsylvania will hear oral arguments in the case of the former Church of the Assumption of the Blessed Virgin Mary tomorrow, Thursday, October 10th. The hearing for the Callowhill Neighborhood Association’s appeal of the historic church’s demolition approval will take place in Courtroom 1 of the Widener Building at 1339 Chestnut Street. 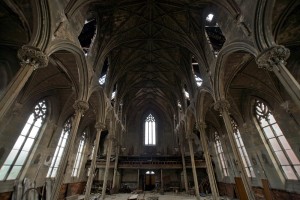 The court, which convenes in Philadelphia three times a year, is hearing arguments for some 45 cases this week. The Assumption case is one of seven scheduled to be heard by a three-judge panel in Courtroom 1 during Thursday’s session, which begins at 9:30 a.m.

CNA, represented by Samuel Stretton, is appealing the Court of Common Pleas’ decision to uphold the Philadelphia Historical Commission’s hardship ruling, which would have allowed then-owner Siloam, a social services agency, to demolish the church. The church’s ownership changed hands before the Common Pleas decision, and the new owner, John Wei’s MJ Central Investment, was granted a demolition permit after the reinstatement of the Historical Commission’s ruling.

However, Stretton’s eleventh hour motion to the Board of L&I Review for a stay of demolition was successful, and has continued, pending the resolution of the case in Commonwealth Court. The board had previously reversed the Historical Commission’s demolition approval for Siloam, which was later reinstated on appeal to Common Pleas. This time around, the board effectively determined that the hardship ruling–as well as the legal appeal of its validity–had transferred to the new owner.

Thus, one key question the court will address is whether the case is now moot, as Siloam has chosen not to participate, while the present owner has not intervened in the appeal. 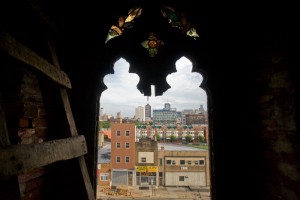 Some stained glass remains, but large portions are missing, exposing the towers’ interiors to the elements | Photo: Bradley Maule

The City of Philadelphia, represented by solicitor Andrew Ross, is expected to argue in defense of the Historical Commission’s original demolition approval, which it holds to be subject to the property and not the ownership.

Although not yet able to tear down the church, MJ Central Investment has subdivided the property at 12th and Spring Garden Streets for redevelopment. Construction of a five-unit residential building broke ground in September at the northwest corner of the property, which had formerly been an empty lot.

CNA is arguing that the Historical Commission erred in finding that the church could not be reasonably adapted for any use. The civic group further claims that the sale of the church last year demonstrates that the property has market value and thus fails the hardship test.