A Peek Into Penn’s Landing’s Future 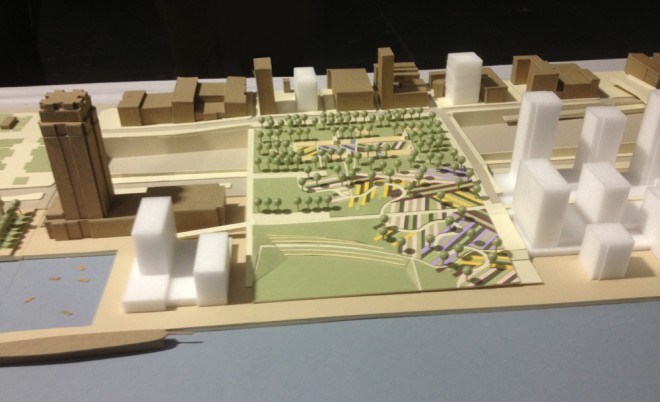 With a scaled model and slide show presentation detailing both vision and process, the Delaware River Waterfront Corporation and Hargreaves Associates laid out their initial plans for redeveloping Philadelphia’s central riverfront last night at Festival Pier. The presentation was followed by a Q&A with the public. 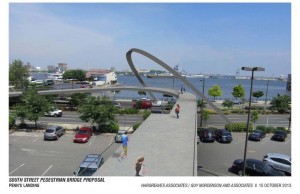 Arch pedestrian bridge over Columbus Blvd at South Street, which Deputy Mayor Greenberger describes as the “gateway to the riverfront district”

The pedestrian bridge at South Street over I-95 will be extended over Columbus Boulevard via a curving, arched path that will place users at the pier where the Chart House restaurant currently resides. Options for developing the plot of land currently a parking lot between Market and Chestnut Streets were intentionally vague, with taller buildings closer to Center City and shorter buildings toward the river, and reprogramming the green space around the marina (next to the Hyatt and Seaport Museum) envisioned new connections between South Street and Penn’s Landing proper. But it was the latter, Penn’s Landing, that was the star of the presentation.

A new Penn’s Landing Park would replace the Great Plaza, building up from the parking between Walnut and Chestnut Streets, and completing the cap over I-95 between those two streets and extending it across Columbus Boulevard, creating a sectioned, landscaped, sloping park in the process. “Our first goal is to bring downtown to the river’s edge,” Mary Margaret Jones, senior principal at Hargreaves, told the crowd. 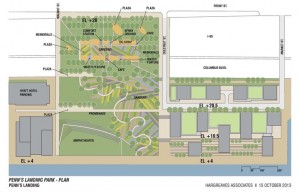 To do this, Hargreaves extended the grade of Old City across the cap, and on the river side, sloping the land upward with open space, forming an upper park and a lower park, connected by a series of grades and slopes. The upper park will feature a series of “outdoor rooms” framed by trees; the lower park will have an amphitheater style open space or lawn, with the capacity for small gatherings and large festivals and views of the river and Ben Franklin Bridge. Through the center of the two portions, a promenade will run north-south, carrying the Delaware River Trail. “This is the jewel in the crown,” Jones said of the new Penn’s Landing Park.

Additional possibilities for new features include a “pool barge”—an actual floating barge with a public swimming pool docked in the river; a new pier park at South Street, where a restaurant/café will be retained (whether or not it will be Chart House, which is already there, will be determined later); space for a water taxi, slightly relocated from the Riverlink Ferry’s location to a more central site between Walnut and Chestnut; and the repositioning and reprogramming of the ships that form the maritime presence at Penn’s Landing: tall ship Gazela, tugboat Jupiter, Moshulu, USS Olympia and Becuna, etc. The giant concrete pi, once intended to carry a tram across the river, will be removed. Public art will be discussed at the next public meeting, in January.

Certainly, the massive overhaul is in no way set in stone and financing it will be its greatest challenge, as all of the speakers acknowledged. But it’s the next step, as Deputy Mayor for Economic Development Alan Greenberger said. “This is a step along the way—it’s not the end result,” he said. More importantly, he noted, “this has the capacity to incentivize private development and create a spectacular new park.”

To view the full presentation, including renderings, visit the DRWC’s web site HERE.