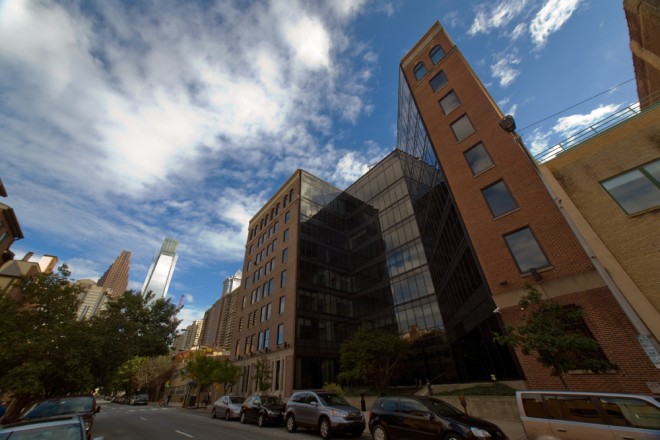 On the southwest corner of 21st and Arch Streets, the Jewish Community Services Building stands as a great example of adaptive reuse. The beautiful structure combines Philadelphia’s factory and commercial office architecture of the past with a boldly modern addition that strangely complements the original design nicely. Over its exactly 100 year history, this old dame has seen all sorts of uses.

The story of this building begins with William Henry Maule, who took over his father’s lumber and seed company in the 1882 after partnering with him for several years. The world of seed publishing was fascinating to the young businessman and all his energy went into expanding the seed and bulb end of the business, handing off the lumber-related duties to his brother Charles. In 1885, Maule came up with the idea of publishing a colorful, beautifully illustrated catalog to showcase the vast variety and quality of his products. After all, Philadelphia was, at that time, a mecca of printing. In 1889, Maule took it to the next level. Instead of appealing to the distribution of his product to dealers, he would target the common independent farmer, the gardening hobbyist, the lone botanical fanboy—anyone who had a mailbox could now become a potential lifelong customer. To sweeten the deal, Maule would include a packet of free samples with every catalog and offer cash prizes for the largest orders. 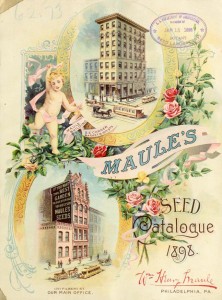 Cover of Maule’s Seed Catalog from 1898. This one illustrates the two predecessors to 2100 Arch | Source: Smithsonian Libraries

This idea skyrocketed the company into nationwide fame. Maule’s Seeds (later called the William Henry Maule Company) was the first in Philadelphia to use this business model and helped make the city into the seed capital of America, causing the spawn of at least a dozen similar outfits. (The Landreth Seed Company was the first large seed distributor, having set up shop at 12th & Market in 1784; Burpee Seeds, Maule’s contemporary and competitor, was founded in 1876.)

By the time his father died in 1902, William Henry Maule had 560,000 regular customers, distributed over five million seed catalogs, given away more than three million seed packets, and awarded $30,000 in cash prizes. Over that time, the company had moved to larger and larger quarters. From a rented space on the Delaware riverfront in the 1880s, to a cast iron beauty at 1711 Filbert in the early 1890s, to a seven-story modern office building at 18th and Market at the turn of the 20th Century. The 18th and Market warehouse was the first to be named “Maule Building.” Maule eventually set his sights on building a much larger headquarters that would end the need to move every decade.

In 1909, Maule acquired a string of properties on the 2100 block of Arch Street and spent the next few years working on what he hoped would be the William Henry Maule Company’s final home. This new $100,000 headquarters would not only house the company’s offices but also warehouse the immense variety of seeds, bulbs, and plants the Maule Company distributed across the country. It would have a footprint measuring 60′ x 111’8″ and rise eight stories. Little-known Francisville native and University of Pennsylvania graduate Frank A. Hayes would be commissioned as architect.

Construction began in 1912 and was completed by the end of 1913. The building was quite prominent on the skyline at the time, as few other buildings in the immediate area matched its height. On September 6th, 1913, around the same time the new building was about to open, the 55-year-old William Henry Maule literally dropped dead from what was then known as a “stroke of apoplexy,” a term used at the time to describe any number of afflictions that appear to cause sudden death within seconds of loss of consciousness. 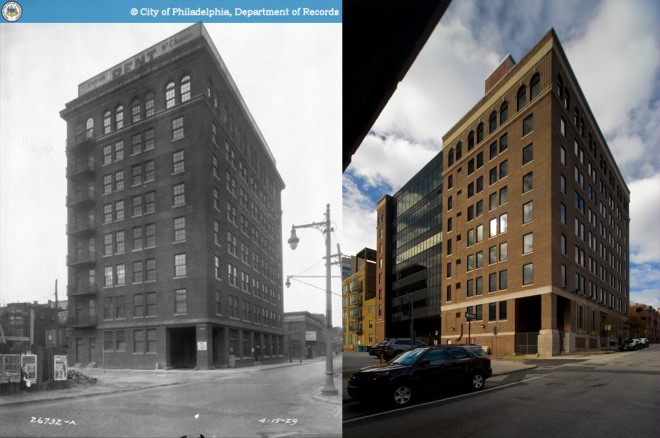 Then and now: LEFT, Maule Building with big “RENT” sign, 1929, via PhillyHistory.org; RIGHT, the same view in 2013, photo by Bradley Maule

In 1946, the Maule Company sold 2100 Arch Street to the John M. Maris Company for $145,000 and used the money to purchase a new office/warehouse in Clinton, Iowa, creating a second distribution point for all deliveries west of Ohio. Despite this major expansion, the company didn’t last. In 1947, the Maule Company merged with the W.A. Burpee Company, with whom they had already been collaborating for about a decade. 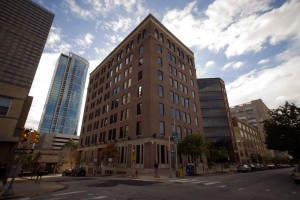 The John M. Maris Company produced glass bottles in the Maule Building until 1952, when the property started changing hands between groups of investors every few years. In 1957, the rowhouses adjacent to the Maule Building were acquired, demolished, and made into a parking lot for the building’s variety of tenants, the most prominent of which was the Conoflow Corporation, which produced regulators, actuators, positioners, transducers, and diaphragm seals. They still exist today as a worldwide corporation with locations in South Carolina, New York, and China.

In 1966, the locally-based Bioscience Information Service of Biological Abstracts (a.k.a. BIOSIS) purchased the old Maule Building for $400,000 and began renovating it floor-by-floor. The firm spent the next two years moving the then 40-year-old non-profit organization from 3815 Walnut. BIOSIS, which printed, indexed, and distributed Life Sciences-related abstracts, was so successful in their first few years at the Maule Building that their non-profit status was called into question–and then they outgrew with space.

Instead of moving, in 1979, BIOSIS commissioned the firm of Wallace, McHarg, Roberts, and Todd (now known as just WRT) to design an addition over the adjacent parking lot, which, with only 20 spaces, served less than 10 percent of the company’s employees. The $6 million addition began construction in 1980 and was completed in 1982. The design employs a giant glass curtain wall that ends with a facade with the appearance of another bay of windows from the old Frank A. Hayes design from 1913.

The firm’s business went into decline in the early 1990s and its workforce was heavily reduced by the end of the decade. The massively expanded Maule Building was no longer necessary. After an extensive cosmetic restoration, the building was put up for sale and was purchased by the Jewish Federation of Greater Philadelphia for $5.646 million. BIOSIS was sold to the Thompson-Reuters service in 2004.

The Jewish Federation renamed the structure the Jewish Community Services Building and still operates in the old Maule Building and its BIOSIS addition to this day. Maule’s old Seed Catalogs are prized collectors’ items and a garden grown with Maule seeds in Walland, Tennesee was recently featured by Inquirer restaurant critic Craig Laban.