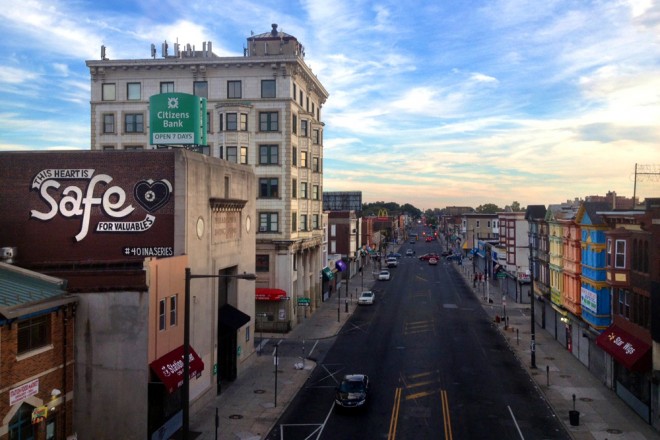 Often taken for granted, the 52nd Street corridor has been West Philadelphia’s bustling “main street” for over a century. Through all that time, only once has a tall building risen to mark this important area, the seven-story building now called the Renaissance Center. A resilient building, despite some weathering and the addition of a bunch of cell phone relays at the top, it has much the same exterior appearance it had when completed exactly 100 years ago. 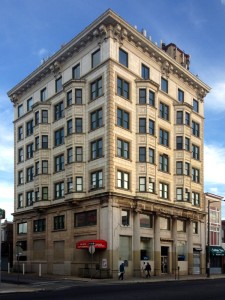 The story of this building begins in 1910, with 52nd Street’s status climbing steadily upward due to the completion of the El three years earlier and the ongoing construction of D.F. McConnell “modern porch-houses” in every direction. The three-story rowhouses on the first block of 52nd Street below the El, all less than a decade old, were already being used for commercial purposes and were bursting at the seams. Four of these homes that were adjacent to each other, 17-23 South 52nd Street, had one owner: one Mrs. Mary M. Parke, an old widow residing in a 6,000 square foot mansion at 911 North 63rd Street in Overbrook (still standing), heir of Parke Bank, a local bank of the era now largely forgotten. (It’s not to be confused with the Parke National Bank of New York from the same time period or the Parke Bancorp of today.)

Mrs. Parke’s property became the proposed location of a new and modern 8-story office building that would serve as a flagship location for the bank and office space for surrounding businesses. Rowhouse architect H. H. Markley was commissioned for its design and the George F. Pawling & Company, who would build the Philadelphia Arena at nearby 46th & Market a decade later, was contracted to build it. Estimated at $100,000, the new building maximized the day’s technology and fashion.

The new fireproof structure, to be called the Parke Building or Parke Bank Building, would sport a limestone and granite facade on its first two floors and “white washable” terra cotta tiles for floors 3-8. A steel skeleton would be provided by Hildreth & Company of Manayunk while the structural concrete would be produced at the Bergdoll & Pawling Company a little up the road at 52nd & Lancaster. An oil-burning vacuum heating plant would provide warmth for the building and a single elevator would serve tenants. Though none of this was terribly unusual for the period, one feature of the building certainly was: Only the first three floors would be dedicated to commerce; the rest of the building would consist of residential apartments, including one luxury unit on the top floor that would be lit by a fancy skylight. (And you thought the mixed-use building was a new concept.) Excitement about the proposed building was palpable and businesses lined up to lease space in the building before it was even officially announced. 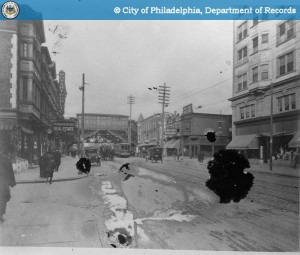 52nd Street, 1914. The Parke Building is on the right. | Image: PhillyHistory.org

Though begun in 1910, construction dragged on for two years. By the end of 1912, only seven stories were built and the interior remained wholly unfinished. Many prospective tenants, including a major department store, backed out of their agreements as a result. In 1913, Germantown-based developer Louis H. Cahan took control of the property and spent $30,000 finishing the construction. The luxury apartment planned for the 8th floor was never built, leaving the structure at seven stories. Once completed, the Parke Building would keep its banking floor, retail spaces, and 14 commercial office spaces fully leased for decades to come.

Numerous banks came and went through the first floor space, changing the name of the building each time. The offices above held the West Philadelphia branch offices of companies from all over the city and the nation. Insurance companies, refrigeration manufacturers, real estate concerns, financial institutions, social clubs, and philanthropic organizations all occupied the building. The south party wall became 52nd Street’s largest advertising space. In the late 1920s, when the Bankers Trust Company came to own the building, growing office demand justified the conversion of the residential apartments in the upper floors into commercial space. Bankers Trust also rebuilt the first two floors, expanding the banking floor and adding a new façade with built-in columns.

After World War II, population shifts in the neighborhood and region as a whole diminished the importance of the old Parke Building. The offices became difficult to lease and large areas of the building stood unused. In May 1965, the building’s then-owner, farmer-turned-businessman-turned-philanthropist Sol Feinstone, donated the building to Reverend Leon H. Sullivan’s Opportunities Industrialization Center, making it the organization’s West Philadelphia branch. This new branch of the O.I.C. would train the neighborhood’s primarily African-American residents in merchandising, secretarial work, and real estate speculation. Feinstone also donated $20,000 toward the renovation of the building. The dedication ceremony of the new O.I.C. branch attracted 7,000 residents and was addressed via telegram by President Lyndon Johnson. 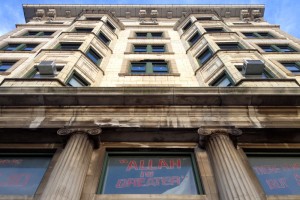 Looking to the heavens on 52nd Street | Photo: Bradley Maule

Renamed the O.I.C. Building, the 28,000 square foot structure stayed active as an O.I.C. branch until investment firm purchased it in 1983. The building languished for the rest of the decade with only the old banking floor occupied by Provident National Bank, who had leased the space since the Feinstone era. Finally, in 1991, a glimmer of hope came for the old Parke Building when the West Philadelphia Economic Development Corporation used funds from a federal grant to purchase the property for $459,000. They proposed a total renovation of the building that would include a restaurant and conference center on the seventh floor. The building was renamed the Renaissance Center.

Renovations on the lower floors of the building were completed using grants and loans from numerous public and private organizations (including Provident National Bank), but the upper floors would remain empty. Today, the building is still in use but is underutilized. A branch of PNC Bank—successor to Provident National Bank—occupies the banking floor, a copy center leases a retail space, and the Masjid Al-Birr Wat Taqwa mosque has made the second floor a house of worship. The West Philadelphia Economic Development Corporation also still keeps offices in the building, and cell phone relays punctuate the roof.

The limestone and granite façade of the lower floors is still in good condition but requires a cleaning. The terra cotta upper floors appear to be in very good shape, and unlike many buildings from its era, the cornice is still fully intact. Now 100 years old, the old Renaissance Center has the potential to regain its status as West Philadelphia’s most important office building. Who’s up to the physical challenge?