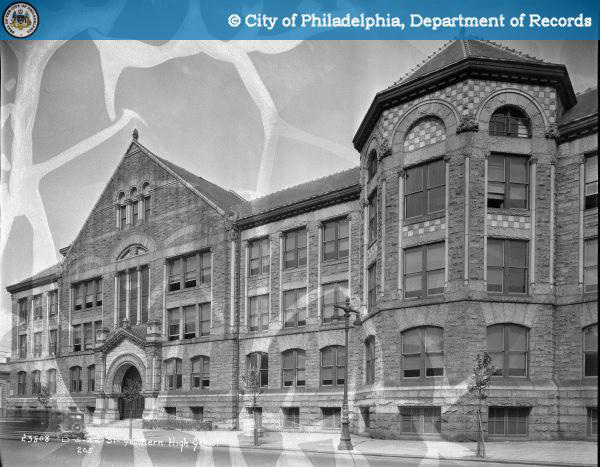 When Catherine Scafidi (née Leonetti) talks about why she cherished her education at South Philadelphia High School, her reasons closely resemble those of parents who opt to send their children to suburban or private schools. The place was filled with resources. But this was the late 1940s.

There was the multitude of athletic clubs, ranging from the usual sports like volleyball, basketball and field hockey to niche activities like modern dance and badminton. There was the elegance of senior tea and the “frolicking” during Class Day. There were dances, such as the one classmates organized so that the entire class could get better acquainted, as the yearbook put it, “The hit ballads of the day were heard in place of the usual square dance records. Diets were forgotten as each girl devoured two or three blocks of ice cream.” There was the bizarre, yet endearing, annual “baby party” where girls would dress up as infants and toddlers. And there was a forty-student orchestra, fully stocked with instruments, which provided the music for the graduation celebration where Marian Anderson was honored with the Philadelphia award.

But most importantly, there was a camaraderie among her classmates that still allows her the privilege to remember each one by name as she thumbs through the yearbook she has kept safe and clean since 1947. And once a month, she still meets the classmates for coffee if they can muster the energy.

On this day, Cass (as she’s known to family and friends) recollected these memories with her sister-in-law Marie Leonetti (née Raspa) around a kitchen table in Bellmawr, New Jersey. I was there partly because Cass is my aunt and Marie is my grandmother, and I like to take the drive to Jersey from time to time for coffee and cake (today was just pretzels left over from a family party because my aunt couldn’t get to the bakery). But a bigger motivation for my trip was to finally learn the full story behind “The Tunnel.” 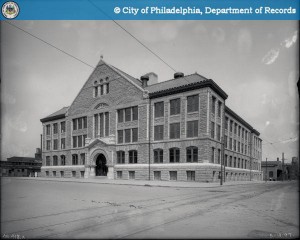 The boys’ half of the coed complex, 1907 | Image : PhillkyHistory.org

“The Tunnel,” as it came to be known by the young people of South Philadelphia, was the moniker for the annex that connected the boys’ and girls’ buildings of South Philadelphia High School. The boys’ portion was built in 1907 and was originally named the Southern Manual Training High School for Boys. The Norman Romanesque-inspired building was designed by the Board of Education architect at the time, Lloyd Titus. The school’s original mission was to provide technical training for young immigrant boys (mostly Italian and Jewish), who were destined for the factories, and for children from established families whose perceived lack of “social skills” made them more suited to manual labor. In 1914, the school adopted more rigorous academic standards to better prepare students for more than life in a factory, and subsequently more students were admitted. To accommodate for this new influx of students, a duplicate school was built for girls. The tunnel served as the conduit between the boys’ school on Broad and Snyder and the Girls school on 13th Street.

Marie and Cass had a very standard upbringing for immigrant families in South Philly. Both of their fathers worked for the city. Cass’s father worked for the gas company and then moved to sanitation. It was the shoveling and disposal of spent coal ash that Cass blames for his early death. Cass’s mom sewed chevrons onto army uniforms during WWII and then landed a job as a cafeteria worker at St. Maria Goretti High School, where she spent almost 20 years. Marie’s dad worked as a street sweeper and then for the city gas company.

Cass entered South Philadelphia High on what she describes as the commercial track. Unlike the academic track, the commercial track prepared students with skills that would allow them to go right into the workforce. After transferring from Southwark Elementary to St. Nicholas Elementary to acquire more “domestic” skills, she realized that a life completely in the home was not for her. She wanted to work in an office. 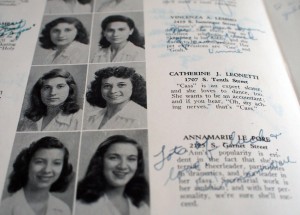 Marie took the same primary classes with a focus on domestic duties, but never was able to continue on to South Philadelphia High School as her mother’s poor health forced her to stay home and focus on the task of keeping a house while taking care of her other brothers and sisters. As Marie once recalled, her older brother had been the repeated victim of a sadistic teacher who liked to tie his students to a chair and beat them with a ruler.

Infuriated by the teacher’s behavior, Marie went down to the school with her mother and confronted him. Her mother stood there while Marie scolded the teacher. Instead of responding to Marie, he turned to her mom and said, “What, you don’t speak English?” Marie informed him that her mother didn’t just get off the boat, and to stop beating her brother. Two weeks later, the teacher learned his lesson when another group of boys, whom he must have also tormented, waited for him after school and returned his aggression.

But Cass did stay in school and thrived in the all girls side of the South Philadelphia High School building. The tunnel, she explained, was built because sometimes boys would take classes on the girls’ side and vice versa. They needed a closed structure to protect from the rain and the cold. By Cass’s account, she had only walked through the tunnel once, maybe twice.

She smiled when she said this, prompting the follow-up question of what exactly went on in the tunnel. She smiled again, blushed and said, “You know, guys and girls would go down there and you know, they’d neck for a little bit.” I asked her to clarify what necking meant and she laughed, “You know, making out. Well not ‘making out, making out’ like they do today. But you know, just boys being boys, girls being girls.”

But even with this admission, Cass made sure to point out that no one ever got in any trouble in the tunnel. There were no fights or other problems. I attributed this to budgets that could maintain constant supervision in the tunnel. But Cass insisted that there wasn’t any supervision. By her account, the students abided by the honor system and even though they may have stopped for a brief moment with a love interest, most students were more concerned with getting to class on time. 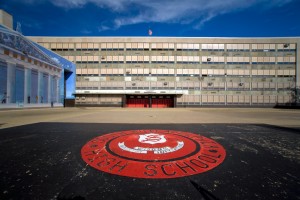 Shadeless Southern: the plaza at the main entrance of the circa-1956 South Philly High | Photo: Bradley Maule

After Cass graduated high school, her life realigned with Marie’s. Marie spent one day working in a tobacco factory before the smell made her sick and she ended up working in a shoe factory. Cass took a temporary job at an insurance agency. They both got married in 1949 after their respective husbands got out of the military, and they both became stay-at-home moms. Marie married Cass’ brother who went on to Pierce College on the GI bill and then became an insurance salesman. After turning down a job working for an engineering company in the Navy Yard, Cass’s husband went to work in a tailor shop where he worked as a presser. Both raised their children in South Philadelphia. Marie made the early move to New Jersey in the late 1960s with the first wave of families moving out of South Philly to the suburbs. Cass took much longer to follow, finally making the decision to leave the city in 2007 when her husband’s health began to fail.

In 1956, the boys and girls buildings of South Philly High were demolished and an “ultra modern” co-ed building of concrete and steel was constructed. Erected on half the site of the old schools, the celebrated design feature is the plaza-like front entrance that lends grandiosity to the otherwise non-descript building.

But Cass and Marie still have a lot of pride for the old building as they ticked through the notable alumni: Mario Lanza, Marian Anderson, Frankie Avalon, Fabian, Chubby Checker, Al Martino. Marie and Cass obviously have a certain affinity for music, but their alma mater, which was known for its rigorous curriculum, also produced powerful lawyers, politicians, and intellectuals, including Brandeis University founder Israel Goldstein and the prolific biographer Stanley Weintraub.

When asked to comment on how her high school experience compared to the one her grandchildren received in Philadelphia public schools, or the level of education that Philadelphia students are receiving today, Cass could only comment on what she has read in the papers about the budget cuts and school closings, and she hopes that kids at South Philadelphia High School are having the same, enriching experience that she had. But she fears that they aren’t. 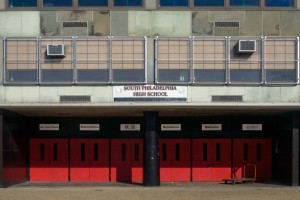 I was curious about that, so I took a look at the South Philadelphia High School website and found an open letter from Principal Otis Hackney. Hackney makes the obvious promises of “rigorous diversity” and a “climate where diversity is celebrated” as well as more loftier goals such as creating students “who will not only inherit our democratic heritage; but, who will also lead the world to peace and prosperity.” (Never mind the interesting grammar.)

But then he goes on to explore the concept of South Philadelphia High School emerging as a “personalized high school of greatness.” This vision hinges on, “making small the large high school through its formation and formalization of smaller learning communities through academies.”

Taking Cass on her word that any questionable activity in the tunnel was controlled by the honor system, recent problems at South Philadelphia High School, such as the racially motivated violence against students of Asian descent in 2009, and the high incidence of poverty (71.8 percent of students live in poverty, according to a 2005 report) may seem incomparable. But as Cass explained when we first sat down, her memories are more of the bonds between her classmates rather than content of the curriculum or how challenging the tests were. In her words, “My classmates and I were like family. We had strong families in the neighborhood and we had pride in a school where our family went before us, and where we knew we’d send our kids.”