SEPTA’s Rehabbed Bus Loop At 33rd & Dauphin: Ahead Of Schedule, Under Budget, Ready For Action 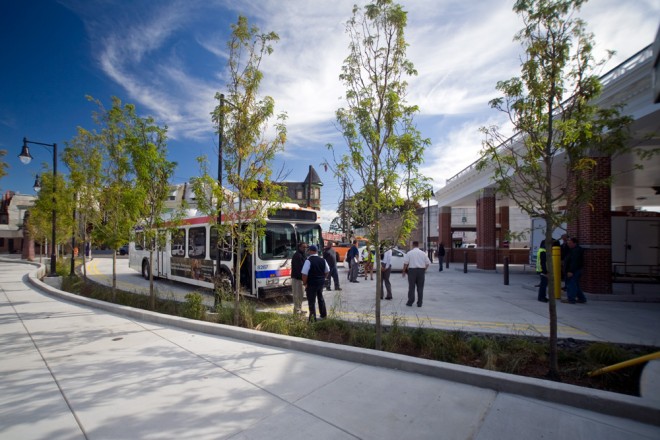 SEPTA formally marked the completion of its reconstructed bus loop at 33rd and Dauphin Streets yesterday. A ceremony at the Strawberry Mansion facility, adjacent to Fairmount Park, was attended by local elected officials and community leaders to commemorate the partnerships that enabled the project’s fruition.

The $4 million project has resulted in the complete rebuilding of the 110-year-old trolley barn—situated at an intersection through which five bus lines transport over 2,000 riders per day—using recycled brick and mortar. Defining architectural features like the cherubs were re-incorporated and the decorative cornice trim was repainted. The modernized facility has three wider lanes to accommodate buses, instead of the four once intended for trolleys, and is fully ADA-compliant.

According to SEPTA, the project was completed under budget and ahead of schedule. The leftover funds will be used to renovate two other bus loops in North Philadelphia next year.

Neighborhood leaders expressed their excitement for the project’s completion and thanked SEPTA for staying true to their historically faithful design.

“It looks as close to the original as possible,” said Tonnetta Graham, president of Strawberry Mansion CDC, who also remarked on the many compliments that the project has generated: “People were walking up and saying, ‘This is wonderful! How did you do this?’”

The aging barn had been marked for demolition, but neighborhood preservationists rallied to raise awareness of the landmark status that the structure holds. Further research by the Preservation Alliance for Greater Philadelphia revealed the barn to be one of the oldest such structures remaining in the city, built in 1901.

“The partnership between SEPTA and the community was key to this process,” SEPTA general manager Joseph M. Casey said in a press release. “SEPTA is proud of the loop’s transformation into a state-of-the-art transit hub that can serve as a centerpiece for neighborhood revitalization, while also providing customers with the modern amenities they deserve.” 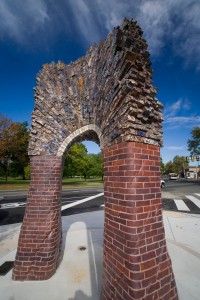 Among the new amenities are a bus canopy, passenger shelters, benches, bike racks, and a retail space for the main facility. Also new to the neighborhood is “Arches of Resurgence,” an installation by British-born artist Michael Morgan, signifying passage and renewal.

In attendance at the ribbon-cutting ceremony was U.S. Congressman Chaka Fattah, whom SEPTA credits for his role in securing a grant from the Federal Transit Administration to make the reconstruction work.

“With a focus on livability and preservation, this project reflects the ongoing economic revitalization efforts in the area and maintains the legacy of this historic facility,” Fattah said in a statement.

Graham also acknowledged the Preservation Alliance and City Council president Darrell Clarke for their advocacy efforts, and praised the eco-friendly features included in the redesign. The bus loop includes a “green roof” with plant modules to reduce storm water run-off, as well as a new storm-water management system to optimize drainage.

“We hope that this will serve as an example for how other communities can utilize partnerships to restore landmarks in their neighborhoods,” Graham said.

Service within the structure begins on Sunday for bus routes 7, 39, and 54. It also indirectly serves routes 32 and 61, which run along adjacent 33rd Street and Ridge Avenue, respectively.