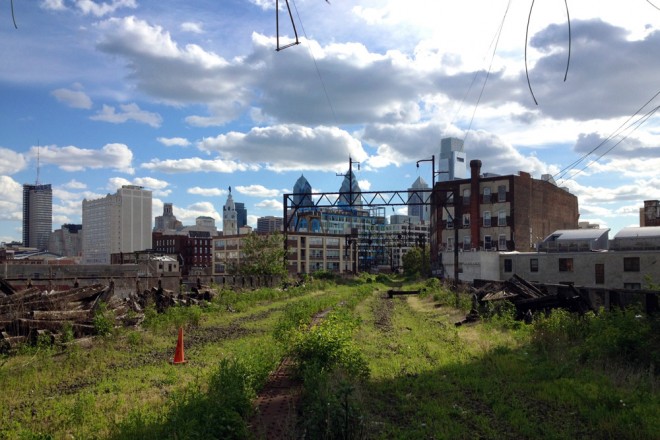 You might attend Saturday night’s “block party to end all block parties”–the Rally for the Rail Park–for the pig roast by chef Michael Pasquarello (of Cafe Lift, Prohibition Tap Room, and Bufad), the food trucks, the improv theater (this is a Fringe Arts event), the fire eating, acrobatics, the brass band, the custom t-shirt silk screening, perhaps even for the coffee and cupcakes.

You might attend because you believe wholeheartedly in the vision: a park along the elevated City Branch and Ninth Street Branch of the Reading Railroad that cuts a soaring L through the Eraserhood connected under Broad Street to a submerged park along the City Branch all the way out to Fairmount Park–a three mile long jaunt to awaken the northern edge of Philadelphia’s center. Or possibly, you’re particularly enamored of one or the other of the two parts of the vision.

Either way, your participation in what will be the largest public event to date in support of the Viaduct project, now a decade in process, puts a crown on a year of burgeoning action that began with the plan to transform a small section of the Viaduct into a green civic space, a project that will begin construction as early as next July. Design on this first phase by the landscape architecture firm Studio Bryan Hanes, under the direction of the Center City District, was followed by the unveiling of advanced conceptual designs for the underground section of the City Branch. 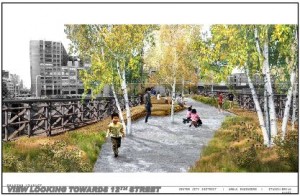 But perhaps the most critical development came out of the process of planning the block party itself, says Leah Murphy, an urban planner who helped charter the group Friends of the Rail Park (which continues the work started three years ago by Viaduct Greene). “We are already seeing one of the most valuable benefits that will come of this event–that there has been such a positive response to the collaboration among groups advocating for the Rail Park at different scales and in somewhat different ways,” she says. “Looking beyond the Rally, we’re talking about ways of continuing to coordinate our efforts.”

This should be welcome news for those who believe in the park’s vision. For years, as New York’s High Line got under way, the only people committed to advocating for turning the Viaduct into public space were John Struble and Sarah McEneaney of the Reading Viaduct Project, an organization closely connected to the Callowhill Neighborhood Association. In 2010, the project drew the attention and interest of Paul Levy, president of the Center City District. Levy became a believer, as he wrote in these pages, in the Viaduct’s capacity to serve as “a focal and defining feature for the diverse communities emerging between Vine Street and Fairmount Avenue.” The CCD’s involvement led to funding for the first phase. Around that time, Murphy, Liz Maillie, Aaron Goldblatt, and Paul Van Meter, working together as the advocacy group Viaduct Greene, proffered the idea of connecting the Viaduct and the underground section of the City Branch as a three mile linear park. But the broader vision confused the necessarily more focused effort to jumpstart the elevated Viaduct project and tensions emerged. 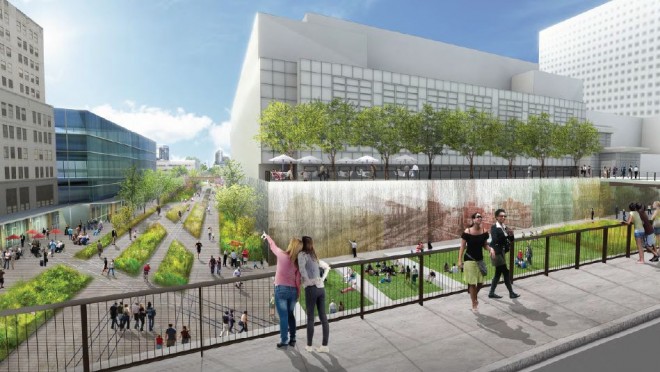 Westward view of Park from above at Broad Street | Image: OLIN Studio

Now, all the groups are collaborating. Says Murphy, “It’s been a fantastic experience working together with Callowhill Neighborhood Association, including Reading Viaduct Project cofounders Sarah McEneaney and John Struble, to organize the Rally. But the focus of advocacy efforts need to quickly adapt to include rigorous fundraising and formalizing partnerships along with continued work towards building awareness, garnering support, and visioning.”

Proceeds from Saturday’s block party will help fund the maintenance and upkeep of the first section of park, once it’s complete. While those costs haven’t been determined exactly, the benefits of the first phase are eagerly anticipated. “It’s going to bring people to the neighborhood. That’s a big positive,” says Matthew Pestronk, of Post Brothers, developer of the Goldtex Building directly adjacent to the Viaduct. The adaptive reuse of Goldtex, built in 1912 as a shoe factory for the Smaltz-Goodwin Co. , into apartments has garnered attention for a clash between the developers and various trade unions over wage rates and for the union protest that endured for months and was often violent. But Goldtex marks the beginning of what some hope will be a spate of real estate development driven by the new park. 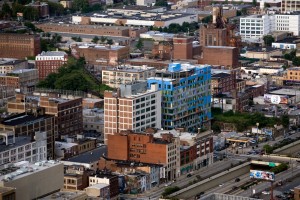 The Goldtex Building up against the Viaduct | Photo: Bradley Maule

Pestronk, who sees a likely bounce in real estate values in the neighborhood as a result of progress on the Viaduct, including for his own building, says it will make him consider looking at other available parcels and buildings nearby. But he cautions against imagining the project will be a “magical catalyst,” inducing a High Line-like building explosion. “We don’t have the income elasticity of Chelsea that would support it, for one,” he says.

And moreover, will the City be able to acquire the bulk of the Viaduct from the Reading Company? As progress builds, that essential question looms ever closer. It’s joined, of course, by the question about the future use of the underground City Branch, which comprises fully 2.2 miles of the envisioned three mile elevated-submerged park. SEPTA, which owns most of the City Branch, is about to commission a study on the future use of the City Branch. Transit advocates say it’s best use is for light rail; the Philadelphia City Planning Commission has endorsed a plan for Bus Rapid Transit there while leaving open the possibility of it becoming part of the Rail Park. “The distinct visions for the site that emerged in the spring brought this issue to the forefront,” says Murphy, “highlighting the need for thoughtful consideration and more immediate decision-making.”

In the meantime, a party is in order, as Murphy says, “to get folks to take an active role in imagining the possibilities.”