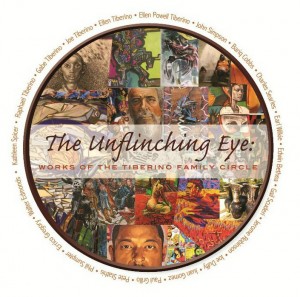 One could never describe the Tiberino family’s relationship with the City and the establishment as one contractually bound. Their art has always combined elements celebrating the joy of life and expressing vivid concern about its pain; see the mural of the City’s MOVE bombing, for example, commissioned by—and later removed by—Temple University. This melding of joy and pain precisely underlies The Unflinching Eye, the exhibit honoring the work of the Tiberinos opening at the African American Museum tomorrow.

The Tiberinos—sometimes called the “West Philly Wyeths,” as A.D. Amorosi mentions in his profile for the Inquirer—are a family whose creativity forges a broad circle around and inextricably linked to urban life in Philadelphia. Since 1999, husband Joe Tiberino has operated the Ellen Powell Tiberino Museum, named for his late wife the painter, with their children Gabriel, Raphael, Latif, and Ellen at their family’s home and compound in Powelton Village. (A stop at the Museum was included in last weekend’s Hidden City tour of the neighborhood.)

The exhibition, running from September 27, 2013 through March 30, 2014, explores themes dark, spiritual, and hopeful, and will showcase works from the entire family, as well as those by friends and associates. An opening reception from 6–8pm tomorrow officially opens the exhibition.

The African American Museum is at 701 Arch Street and is open Wednesday–Saturday 10am–5pm, and Sunday noon–5pm. For more on the Tiberinos and their place within Philly’s art world, visit the museum’s web site HERE, and see Nathaniel Popkin’s March 2008 profile for Philly Skyline HERE.