Though it takes up a considerable part of the 5500 block of Baltimore Avenue in Cobbs Creek, it isn’t hard to miss the Ambassador Theater. Now the warehouse and shop floor of a printing operation, the facade’s modern awning and garage style doors hardly suggest “movie palace.” However, a closer look reveals hints of the neoclassical excess that defined cinemas of the Jazz Age. 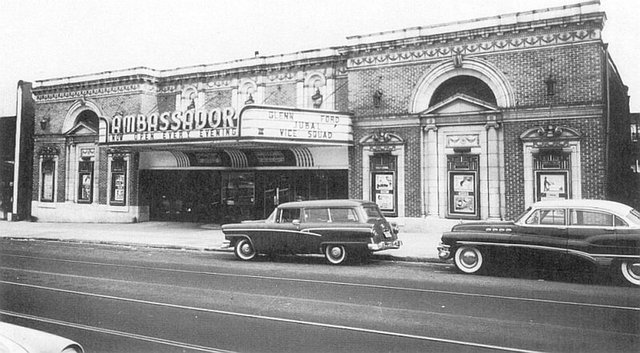 Designed by Philadelphia architect Harvey Childs Hodgens, the 1,000 seat Ambassador opened in 1921. In the early years a massive 90 foot electric roof sign shone above the center marquee, ensuring the rapidly developing area surrounding Baltimore Avenue was drawn to the theater. The ornamental arches and decorative urns that once divided the space between the roof and marquee stand a lone testament to building’s once grand entryway. The limestone framed display boards remain on the east and west ends of the building, as do the small stain glass arches embezzled with the name “Ambassador.” On nights when the printers work late, the interior lighting showcases the windows to passersby. In an earlier era, these provided the only natural light to the second floor standing balconies.

In the 1920’s, The Ambassador was owned by Frederick G Nixon-Nirdlinger, a former vaudeville agent who became one of the wealthiest theater managers in Philadelphia. At one point he ran both the Academy of Music and its rival to the north, the Metropolitan Opera House. 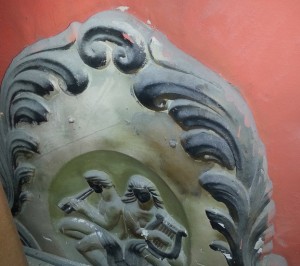 Nixon-Nirdlinger’s dominance of the Philadelphia theater market ended on his honeymoon. After marrying in Philadelphia, Nixon-Nirdlinger and his wife (his 4th) went to Nice. Upon arriving in France the couple got into an argument which ended with the theater magnate dead and his bride, Charlotte Nash, on trial for murder in Paris. The killing garnered international headlines throughout the spring and summer of 1931, ending with Nash’s acquittal. The French jury found ample evidence she acted in self-defense.

Following Nixon-Nirdlinger’s untimely death, The Ambassador carried on as a first and second run cinema until its movie days ended for good in 1958. Subsequent owners tried to revive the theater as a rock club and later as a disco, but by 1980 The Ambassador was abandoned and its marquee removed to prevent it from falling down on its own. The Ambassador likely would have been demolished had the adjacent printing business not outgrown their space. 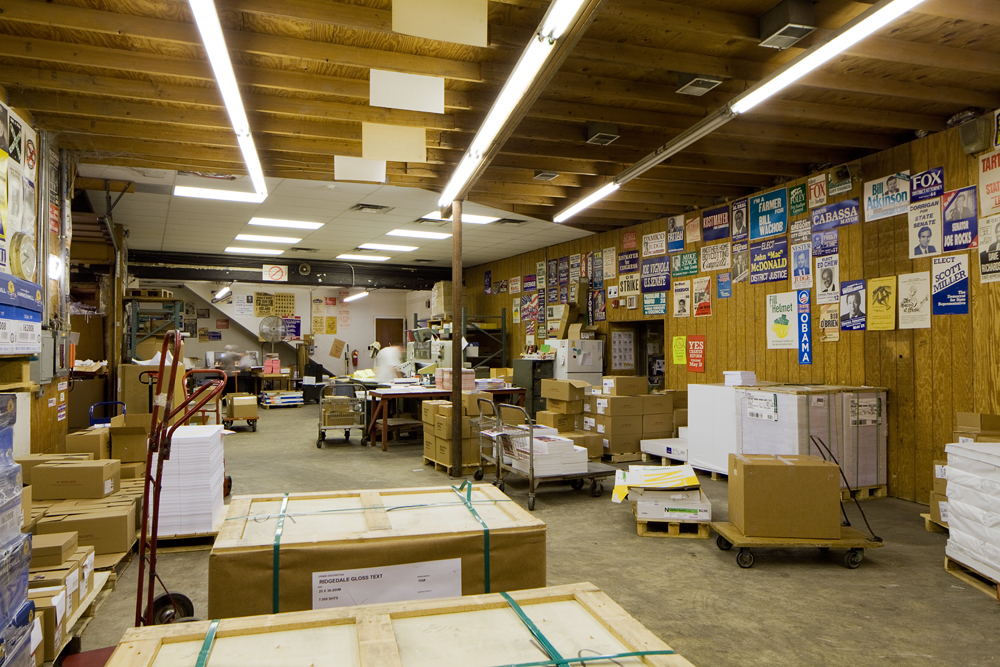 Brothers John and Jim Kennedy founded Kennedy Printing in the late 1950’s. Since then the business has created campaign paraphernalia for almost every Democratic mayoral candidate of the last 50 years, as well as for national heavyweights Bill Clinton, John Kerry, and some of those “other” Kennedys. 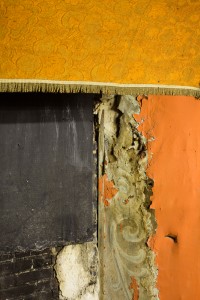 The printer’s move into the Ambassador in the 1990’s stabilized the structure but also saw the loss of some original features (including the sloping floor) to accommodate the myriad of printing presses used by the operation. Still, many of the interior features which survived the disco era (in which the seats were removed and the stage replaced) remain.

Two iron fan grates adorn the ceiling, indicative of the pre-air conditioned world the theater opened in. Attached to one of the grates is an object covered in canvas, possibly a disco ball from the 1970’s. The original fireproof door opens to the projection room, and many of the decorative reliefs remain on the walls of the upper floor. In addition, you couldn’t lay claim to a proper 1920’s movie palace without a grand curtain, and the Ambassador’s orange flourished example is in markedly good shape.

In contrast to many theaters now demolished or abandoned, the Ambassador had the fortune of merging its history with a long established community business. Perhaps this shows how practical adaptation can preserve sparks of the past, even if they no longer fall from a 90 foot electric sign.