Inside A Stone Castle, They Wish To Throw Up More Bricks 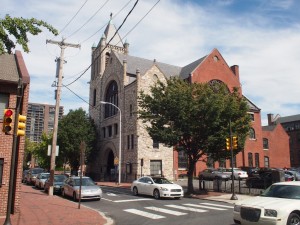 I have great admiration for Mother Bethel pastor Mark Kelly Tyler. He has shown genuine leadership on the schools crisis and has almost singlehandedly refashioned the legacy of Richard Allen, one of the most daring, innovative, and foresighted men in the history of the United States. (As part of the History Making Productions team and in partnership with Reverend Tyler, I helped make a film on Allen’s life and legacy of Allen.) The church is one of the great pilgrimage sites for black Christians; many of them to learn about Allen and visit the Richard Allen museum there, others because the church itself has been a place of enormous importance in the spreading of the African Methodist Episcopal (AME) movement.

Everyday inside his monumental church Tyler feels this legacy. “We live in it,” he told me. This is why he stands resolutely opposed to a proposed four story, six unit apartment building opposite the church, at Sixth and Lombard Streets.

Against the wishes of its architecture committee, Philadelphia Historical Commission, which governs all new construction in the Society Hill Historic District, where both Mother Bethel and the lot stand, has approved the contemporary design for the building, to be finished in gray stucco and glass, designed by architect Stephan Potts for developers Pamela Ying Jin and James Nga Kuk Li. 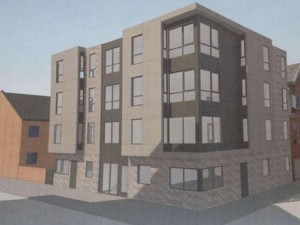 Tyler, in talking to Daily News reporter Valerie Russ, conceded that he likes the design, just for somewhere else. “It doesn’t fit in with the historic character of the community. It would be a beautiful building somewhere else. But it’s hideous where they want to put it.”

“What that building feels like,” he said in an interview this afternoon, “it’s not right. No one says you have to build old-fashioned, we’ve said we don’t care for that style and that size right in front of us. I represent not just the 600-700 people of this congregation and the people of the neighborhood, but the hundreds of thousands who come through here every year. When they step out of here, the building shouldn’t jar them or shake them.”

In the wide view, this seems like a double standard. The present Mother Bethel was finished in 1890 (a century or so after Allen became the first black man in America to own land by purchasing the corner of Sixth and Lombard), the fourth iteration of Allen’s church, this one in the Richardson Romanesque Style, in vogue at the end of the 19th century. The Mother Bethel tower has always suggested to me the church that stands at the center of every French village, for indeed that’s its influence: Medieval France, assuredly not Federal Philadelphia.

So how do the people inside a mostly stone church that looks a lot like a castle and towers over its neighbors have anything to say about a slightly outsized apartment building that–as the church itself did once–seeks some measure of the contemporary?

Reverend Tyler puts it simply: “What we say should mean something. We care about the experience of this place, whether that’s inside or outside.” 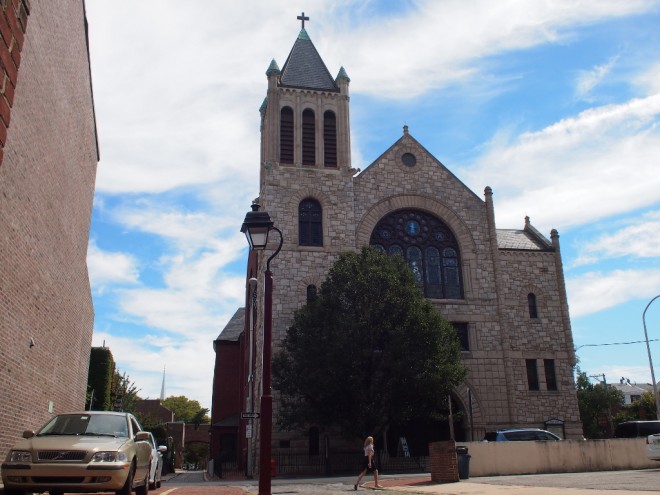 I wondered if the real issue was the height of the building. Certainly the new building will block some afternoon light from illuminating Mother Bethel’s windows. That’s a shame, but any building on the site, now a parking lot, is going to have the same impact.

Tyler is true to his word about the experience outside the church being as important as inside. In his tenure, parking lot that sits adjacent to the church on the corner of Lombard Street has been upgraded (though still a surface parking lot on a main corner), the brick sidewalk rebuilt, and a church-owned building across the street was rebuilt. 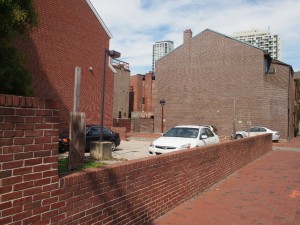 The lot, in some of its contexts | Photo: Nathaniel Popkin

But the thinking that says the planned apartment building “doesn’t fit” with the surrounding streetscape is based on a narrow view that a city or a city neighborhood can be held still in a certain architectural moment (while indeed all of society changes around it).

It’s also based on a misreading of context as an abiding architectural constriction. What exactly is the context for this planned little apartment building? Is it the shamshod tiny brick 1970s row houses on the corner across from Mother Bethel? A building from 1790 or 1890? Or is it the polychromatic turn of the century Byzantine Revival B’nai Abraham synagogue just around the corner (minus its once soaring onion domes lost to lightening some years ago)? What is jarring and what isn’t? Which contexts matter?

To Tyler, the only context that matters is the church’s history and its standing. It can’t be denied. “We’re going to use whatever power we have to change this,” he said. Allen himself presided over many attempts by the wider white Methodist movement to take over his church. He stubbornly, angrily, prevailed (even winning a Supreme Court case in 1817 that gave the AME members the right to manage their own church).

Beyond this one site, however, the very real consequences of such reactionary architectural protest is to make it ever more difficult to design a building in Philadelphia that will look and feel like 2013. Developers who have even a slight impulse to employ contemporary architecture must think twice–and most will just fall back on the ye olde. Tyler told me that isn’t his intent, but it certainly is the desire of many of the Society Hill residents who have lined up behind him.