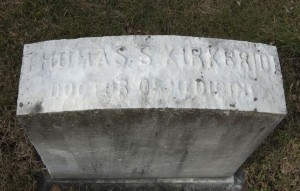 In a remote corner of Laurel Hill Cemetery, far from the ornate gate house, beyond the towering monoliths and elaborate sculptures guarding the tombs of Philadelphia’s elite, on past the mausoleums of “Millionaire Row,” there is the humblest of head stones. The name, carved onto the top of the stone rather than on its face, is barely legible. Time and acid rain have worn down the inscribed marble, but if you look carefully the simple inscription can still be read.

There is also a small foot stone that at one time showed the dates of his birth and death, but the stone is eroded beyond reading. The stone is plain, simple, and humble reflecting the values of the man it memorializes. In a place where the rich and famous proclaim their eternal greatness with massive structures of granite and marble, it would be easy to dismiss Kirkbride as insignificant. However, Kirkbride’s dedicated and compassionate approach to medicine revolutionized the treatment of mental illness in the 19th century.

The Kirkbride legacy endures in pioneering psychiatric care facilities around the nation that followed his treatment and architectural vision, and in the former men’s ward of the Institute of Pennsylvania Hospital, which he founded in 1841, now the Kirkbride Center, an outpatient clinic for behavioral health and addiction treatment. The Kirkbride Center and a few other buildings are all that’s left of the massive hospital campus that extended from 49th Street all the way east to 42nd. Though carved up several times in the last century, it remains a place of opportunity and possibility for West Philadelphia. 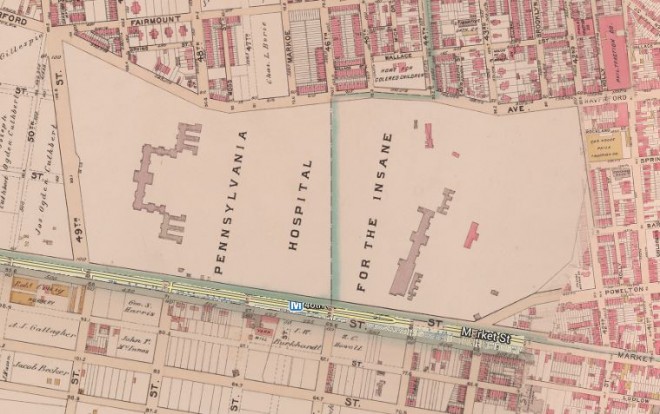 The massive campus of the Pennsylvania Hospital for the Insane | 1895 Bromley Atlas, Philadelphia Geohistory

The revolution began in the early 1800s. Until then, the mentally ill were feared and often shunned by their families, sent to the alms house or a primitive asylum, little better than a dungeon (in this period, the wealthy sent their insane relatives to the Pennsylvania Hospital, where they mostly languished and died).

Some members of the Quaker community of Philadelphia, however, did not share this view. They believed mental illness could be cured and that people needed to be treated with kindness and compassion, not just be removed from sight and subjected to punishment and restraint. The second decade of the century saw rapid advancement. In 1811, Quaker minister Thomas Scattergood proposed the creation of Friends Asylum for the Relief of Persons Deprived of the Use of their Reason. In 1812, Philadelphia physician and Founding Father Benjamin Rush published his groundbreaking Medical Inquiries and Observations upon the Diseases of the Mind.

Prior to both of these events, on July 31, 1809, Thomas Story Kirkbride was born into a Quaker family in the Delaware River town of Morrisville, Pennsylvania.

A frail and sickly child, Kirkbride was raised on the family farm, but knew at a young age he was not cut out for the hard physical life of a farmer. When he was 13, his father was struck by a debilitating illness, but recovered with the aid of physicians. The recovery inspired the young Kirkbride to pursue medicine, and he soon he crossed the river to study at the Classical Institution in Trenton, NJ. Four years later, he went on to study higher mathematics under John Gummere at the Burlington Boarding School.

In 1827, Kirkbride returned to Trenton to “read” medicine under Dr. Nicholas Belleville, who came to the new world as a member of the French forces commanded by Lafayette. While working and studying with Bellville, Kirkbride read Benjamin Rush’s work on psychiatry. The treatise may have inspired Kirkbride, but his actual goal was to become a surgeon. In 1828 that goal lead him to the University of Pennsylvania, which has chartered the first medical school in the U.S. For the next four years, Kirkbride trained to be a surgeon. 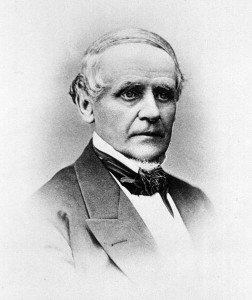 Thomas S. Kirkbride | Photograph from the collection of the National Library of Medicine

Following his graduation, Kirkbride was appointed Resident Physician at the Friends Asylum for the Relief of Persons Deprived of the Use of their Reason, the first privately run psychiatric hospital in the country. The hospital, now known as Friends Hospital, still operates today. Kirkbride remained there for two years before leaving to open his own private practice. For the next five years Kirkbride performed as a physician and surgeon from his office on Arch Street below Fifth. The ambitious doctor was quite successful and set his sights on the position of Attending Surgeon at the Pennsylvania Hospital, a position he could have easily had if fate had not intervened.

As of 1840, the mentally ill at Pennsylvania Hospital were cared for in the same facility as those with physical ailments. Overcrowding and the need for long term care for many patients created a huge burden on the hospital and so a separate facility for psychiatric patients located across the Schuylkill River was planned. Kirkbride’s friend John Paul, who sat on the hospital Board of Managers, approached Kirkbride with a huge opportunity, the office of Superintendent at the new Pennsylvania Hospital for the Insane. The offer included a generous salary, a house on the hospital grounds and the chance to develop entirely new approaches for treating and caring for the mentally ill. Encouraged by his parents and young wife, who was pleased that this role would allow him to spend more time at home than he would as attending surgeon, Kirkbride accepted the position.

His first step was to spend much of 1840 touring existing institutions for the mentally ill, observing what worked and what did not. On January 1, 1841, he began his new role. Eight days later, on January 9, the first patient was admitted, and in a short time all of the “insane” were transferred from the Pine Street Hospital to the new location, located between 46th Street and 49th Street, just above Market. Raised with a strong work ethic and instilled with a powerful sense of compassion, perhaps stemming from his Quaker upbringing, Kirkbride was known for his motto, “My duty is my pleasure.” And these were not empty words. The doctor not only personally oversaw daily activity at the new facility, but in October 1844 he also helped found the Association of Medical Superintendents of American Institutions for the Insane, a forerunner of the American Psychiatric Association.

Kirkbride practiced holistic medicine: every aspect of the patient’s experience at the hospital impacted his or her progress and the potential for being cured. He began to combine his medical ideas with his own personal interest in architecture to create an entirely new design and set of specifications for future hospitals.

He did extensive consulting for the new facility in Trenton, NJ. In 1848, The New Jersey State Lunatic Asylum became the first hospital built on what became known as the Kirkbride Plan. Kirkbride laid out the plan in a 1854 book–his defining work–On the Construction, Organization, and General Arrangements of Hospitals for the Insane with Some Remarks on Insanity and Its Treatment. “A hospital for the insane should have a cheerful and comfortable appearance, every thing repulsive and prison-like should be carefully avoided, and even the means of effecting the proper degree of security should be masked as far as possible, by arrangements of a pleasant and attractive description,” he wrote. A model facility would have a central administration area with wings coming off the left and right sides, one for male patients and the other for females. The wings would extend out and back from the central section in a step pattern, allowing more disruptive and dangerous patients to be held at the furthest points where they would pose less threat disruption to the rest of the population. 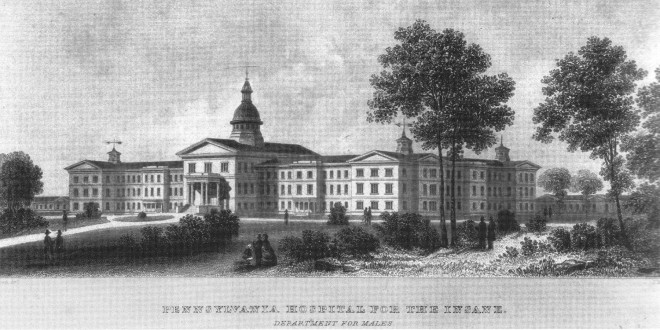 Back in West Philly, the new hospital was already short on space. To help solve the problem, a new facility was erected a couple blocks from the exiting hospital. It would be built on the Kirkbride plan, however only males would be housed in the new facility, the existing hospital being converted to a females only ward. Erecting a new campus was not inexpensive, but Kirkbride lead the fundraising effort personally. On July 7, 1856, workers laid the first stone. It took a little more than three years and cost $355,907.57, all from private donors, to open the male ward on October 27, 1859. In other cities, medical officials adopted his system for massive asylums that dwarfed Kirkbride’s own. 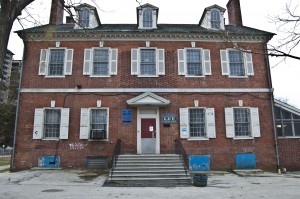 Superintendent House of the Pennsylvania Hospital for the Insane | Photo: Ethan Wallace

In 1879 an illness left him an invalid. Unable to make the rounds of the hospital, Kirkbride met with staff and patients in his house, located on the campus of the female ward. He continued to run the entire operation up until the last nine months of his life, by which time he was in need of almost constant assistance. He died December 16, 1883.

Today, few of the hospitals built on the Kirkbride plan are still in operation. Some of the most beautiful and ornate have been razed while others have been converted to new purposes. In West Virginia, Weston State Hospital, now known as the Trans-Allegheny Lunatic Asylum is the only Kirkbride that has been converted to a museum. The very first Kirkbride Hospital still stands, unused and decaying, on the campus of Trenton State Hospital. The original West Philadelphia hospital that became the Women’s Ward was razed and in the early 1960s and the Philadelphia Housing Authority constructed the Westpark Apartments on the site. Kirbride’s house serves as a community center. 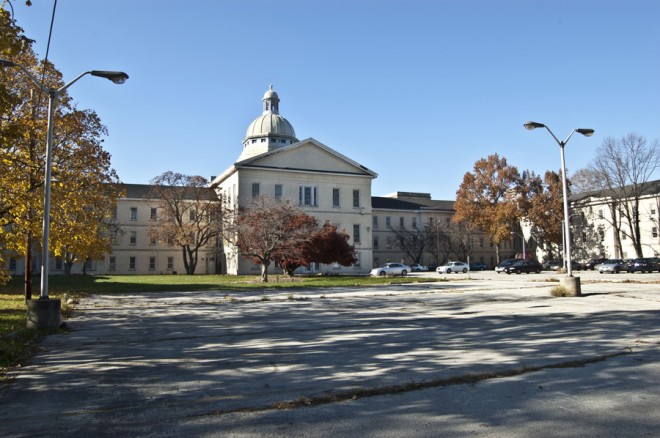 The pioneering Men’s Ward was sold by Pennsylvania Hospital in the early 1990s to John and Thomas Fleming of CoreCare Systems, an operator of private behavioral health facilities. With sections of Kirkbride’s original restrained Greek Revival hospital under renovation today, the building remains dedicated essentially to its original purpose.