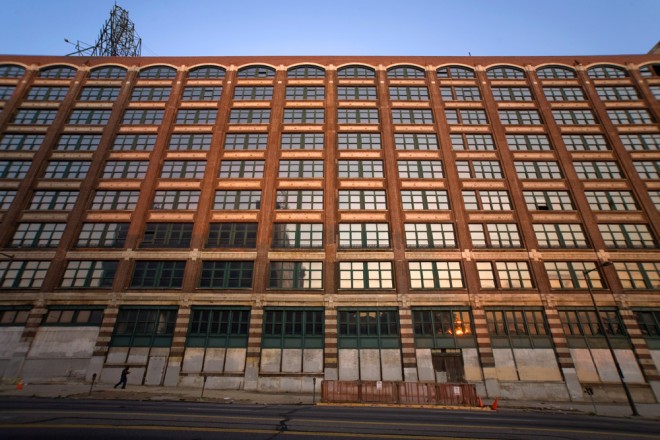 “It is a far cry from the painting and enameling of automobile body products to the blood-soaked battlefield of Europe,” wrote the Bulletin on September 18, 1919. “[Yet] every doughboy of the millions that helped to hurl back the German horde has reason to thank the Philadelphia branch of the Ford Motor Company for whatever portion was allotted to him of the 2,749,600 steel hats that deflected many a death dealing bullet and saved many an American life.”

That prose, typical parlance of those post-armistice times, rains praise on the industrial efficiency perfected in North Philadelphia—efficiency directly imported from Detroit. Albert Kahn (no relation to Louis Kahn) made his name as the Architect of Ford, work that bore his behemoths across the Midwest and Northeast, including the Ford Motor Company assembly plant opened in 1914 at Broad Street and Lehigh Avenue, previously the Tiernan & White lumberyard.

So impressed by the work Kahn had done for the Packard Motor Company, which included the terra cotta adorned building at Broad & Wood just north of Vine Street, Henry Ford personally recruited Kahn to design the buildings for his company’s growing empire. Kahn and his brother’s innovative, fireproof, reinforced concrete construction earned it the name the “Kahn System,” and its heavy duty infrastructure allowed for large floor plates, ideal for automobile manufacturing. “Large” certainly describes the floor plates at Broad & Lehigh with accuracy. 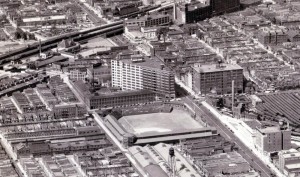 With the United States’ entry into the first World War in 1917, defense needs necessitated a shift in manufacturing, and the Ordnance Department struck a deal with Ford for use of the plant. Asked by the Army to supply 7,200 helmets a day, the plant actually produced more 40,000 a day at its peak, and had the capacity for 75,000. As well, over 35,000 eye guards, 5,000 suits of body armor, and 384 machine gun trucks (Ford brand, naturally) departed Broad & Lehigh for the European theater.

After the war, the Ford-driven societal evolution developed locally in the form of a newer, bigger plant on the Chester waterfront from which they could ship cars directly. That left Broad & Lehigh available for sale, and Ford first put it on the market in 1925 for $1,725,000. (Incredibly, the most recent sale of the building, completed in 1989, changed hands for just $1,750,000.)

After spells used for US Army storage and a Sears, Roebuck and Company warehouse, the building was leased by Joseph H. Cohen & Sons in 1950. Cohen manufactured men’s clothing, including suits and military uniforms, and grew to over 2,000 employees in the building. In 1969, with an assist from Philadelphia Industrial Development Corporation (PIDC) and Girard Trust Bank, the Greater Philadelphia Enterprises Development Corp., a 60s-era economic development group, arranged a loan of over $6 million for Cohen to expand its workforce, specifically attracting the minority population the surrounding area. As part of the agreement, a second 10-story building was to be erected on the adjacent lot at 15th & Lehigh but never happened. 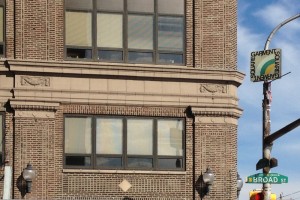 When Botany Industries declared bankruptcy in 1972, Cohen & Sons purchased the company and emphasized the better known brand; when Botany 500 suits began shipping from Broad & Lehigh, a “Botany 500 Building” identity stuck and remains today. (Prior to this move, Botany 500 distributed from the Pitcairn Building in Chinatown and maintained a factory at 23rd & Walnut.)

In a continued push for revitalization, PIDC and the City designated the corridor “Garment Square,” a nod to Cohen, Botany, and nearby Queen Casuals. Mayor Frank Rizzo spoke at the first (and only?) Garment Square Day, and the signs installed for the 1973 event still hang at the corner of Broad & Lehigh.

The company saw its last days of growth in The Sound Of Philadelphia 70s. A March 1978 report in the Bulletin put Botany’s workforce at 1,800 and stressed advances in their trucking fleet (which carried a new slogan “Botany Suits America“) and a renovated factory. “We are not a sweatshop. We’re air-conditioned, we have music throughout the building,” Botany’s personnel director told the Bulletin at the time.

A slumping economy forced Botany to reduce its workforce by half in 1982, and the final whistle sounded at Broad & Lehigh in 1986. In 1989, Cohen & Sons sold the building to a shell company called simply 2700 North Broad LLC, registered at an address that appears to be a personal residence in a tony neighborhood of Great Neck, NY. Botany continued manufacturing pants at 640 North Broad Street until 1995; Eric Blumenfeld renovated that building in 2007. 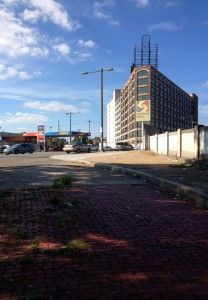 Around that same time, New York based architect Cosmo Veneziale had just completed renovation of the Broad & Lehigh building—a renovation that came from a court order from the City. Broken windows and other debris threatened the SEPTA commuter line below, and the giant blight hulked symbolically over the North Philadelphia subway station.

“We were advised by our client to stabilize the building, [specifically to] renovate the windows,” says Veneziale. “We were under the impression of doing a mixed-use rehab—retail on the ground floor, residential up top, parking included—and to absorb that kind of space, you need multiple tenants.”

One idea saw attracting ever expanding Temple University, whose campus rests two subway stops south. But Temple wasn’t interested in taking its campus that far north, despite having its medical center farther north, some of whose doctors maintain offices directly across Broad Street in the Traylor Building.

Unless they’re tucked away in a house on Long Island, no known plans for what happens next at the Ford-Sears-Cohen-Botany building seem to exist. But the City Planning Commission hopes they do. The Botany 500 Building appears as a “significant development site” in their 2005 report “Extending the Vision for North Broad Street. The Planning Commission’s Lower North District plan is underway, but Lehigh Avenue is its northern border; the Botany building sits on the north side of the avenue, in the North District, whose plan is a future phase.

Still, Alan Urek, the commission’s Director of Strategic Planning & Policy, recognizes its stature. “It’s a terrific building in a terrific location, served by a number of uses,” Urek says, pointing out its historic neighbors the Goodyear building on the northern end of the same block, Joe Frazier’s Gym, and the trifecta of train stations: SEPTA’s North Philadelphia subway station directly downstairs, the North Broad Street regional rail station catercorner designed by Horace Trumbauer in 1929, and the Amtrak station designed by Theophilus Chandler opened in 1896 and renovated in 1999. “But we’re not developers,” Urek adds. “We can only recommend it [for adaptive reuse].”

The ten-story building at Broad & Lehigh once transitioned from Model Ts to Army helmets, and from a department store warehouse to a 2,000-employee garment factory. It’s familiar with adaptive reuse; it’s just waiting for the next one. 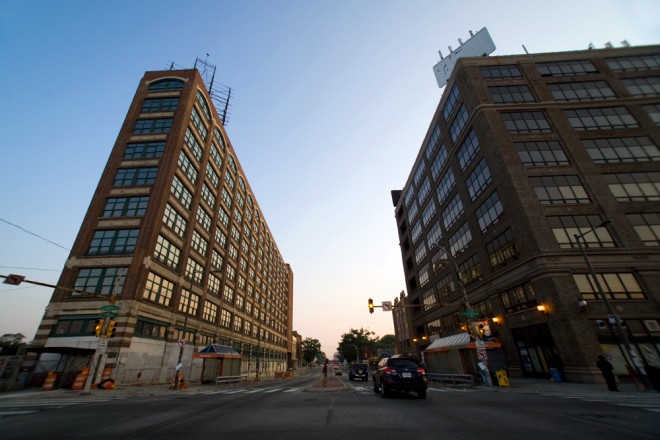 The author would like to thank John Pettit and Caroline Slama at Temple Urban Archives’ Special Collections Research Center for their assistance in this story.