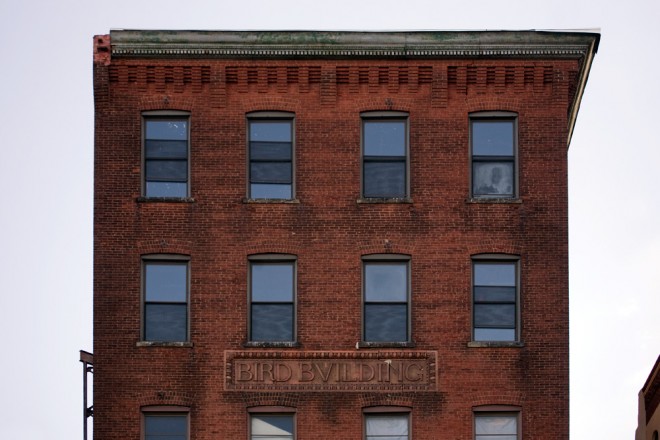 As a person who admires (and sometimes obsesses over) Philadelphia varied architecture, I often find seemingly ordinary buildings reaching into my heart, almost begging to not be forgotten. At 1034-36 Spring Street, there stands such a building. This six-story structure’s thin frontage gives it an illusion of height; having streets on three sides and a pocket park on the fourth allows for windows on every wall. The building’s street level sports a heavily-altered cast iron storefront, topped by a brick façade that runs all the way to the top, ending in a decorative brick and tin cornice. Between the fourth and fifth floors, the brick is interrupted by an ostentatious emblazonment reading “Bird Building”. 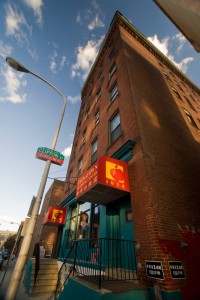 Joseph F. Bird, an entrepreneur who ran a building and contracting business out of his house at 129 North 11th Street (still standing, having survived the Convention Center’s path of destruction), was the Bird Building’s Bird. In the late 19th Century, Bird built many rowhouses and the occasional saloon. He was a member of the Master Builder’s Exchange and was a partner in the Adamant Cement Company of Allentown.

In the late 1890s, likely motivated by his access to Adamant Cement, Bird took his business to the next level. He purchased a row of 18th Century wooden rowhouses that faced a tiny interstitial street called Castle Court (not to be confused with the pocket park of the same name on the current building’s eastern side) that opened up on the 1000 block of what was then called Sergeant Street. There, Bird built a speculative industrial/office highrise and humbly named it after himself.

By the time the Bird Building was ready to be occupied in the last few months of 1900, Sergeant Street had been renamed Spring and the National Drug Company of Philadelphia was ready to move in. (There is currently a Sergeant Street in Kensington.) This company was the post-retirement project of George F. Harvey, who spent decades building his own pharmaceutical empire in Sarasota Springs, New York. Harvey was eager to locate his new operation in Philadelphia because of its then-status as the “medical center of the United States”. He wanted to locate to this part of Chinatown because of its proximity to the Philadelphia College of Pharmacy, the predecessor to University of the Sciences then located at 10th and Cherry.

In the short period the National Drug Company of Philadelphia leased the Bird Building, they manufactured and sold an immense variety of pills, syrups, elixirs, extracts, needles, thermometers, antiseptic products, and medical supplies out of their 165-page catalogue. The company grew so fast that the 17,000 square foot building was inadequate by 1907. 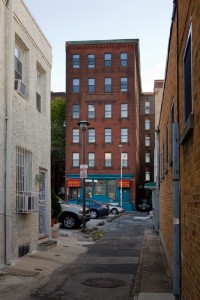 Meanwhile, the success of the Bird Building led Joseph Bird to expand his building and contracting company into a full-fledged development empire. His company would go on to build the LuLu Temple (demolished), 708-710 Market (demolished), 1033-35 Race, numerous church buildings, and some of the city’s earliest parking garages (boo).

In 1908, the Bird Building started taking on multiple tenants at once but was dominated by the Walter F. Ware Company, which manufactured patent medicines and druggist supplies using the National Drug Company’s leftover equipment. Ware also produced rubber goods, hosiery, and elastics, but their most well-known product was the Mizpah, a continuous suction breast pump that was considered quite the technological marvel in its time. The Walter F. Ware Company stay in the Bird Building until 1939, sharing the space with the Deluxe Brush Company (1915-18), the Fletcher Printing Company (1917-18), the A. Largeman Belt Company (1921), and the Philadelphia branch offices of Campbell’s Soup (1932).

By the late 1930s, this part of the city had cemented itself as a printing/paper manufacturing stronghold and the Bird Building became no exception. Most of the building’s tenants for the next six decades would be somehow involved with this industry. The Anthony Richie & Company, one of the first of these companies to occupy the Bird Building, would end up buying the place. The company’s owner and namesake—the “master paper ruler”—Richie slowly converted the entire space into a fortress of printing, binding, and publishing while the Walter F. Ware Company slowly moved out. Richie would later auction his company and the Bird Building off to one of his own relatives, making the company’s name switch to J.E. Ritchie & Company. They leased extra space out to some other printing and paper concerns, the Toll Paper Products Company and the Mitchell-Hunsberger Company. 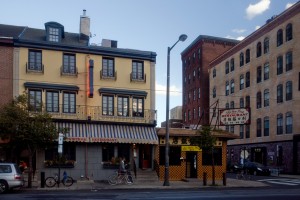 Further upgrades to printing, binding, corrugating, and paper producing equipment would be undertaken by the building’s next owner, the W.T. Peck Company, in 1946. The Peck Company worked in printing and photo lithography and is remembered today for their postcards that depicted, among other things, scenes from Philadelphia. They would own the property all the way into the 1990s. Charles Slade’s Print Shop, J. Ralph Kirkley Incorporated (candy), Accurate Step & Repeat System (photo processing machinery), and Fiesta Hats (hats, duh) occupied other space in the building.

The Garrison Printing Company came along in 1974 and performed yet another upgrade to the printing-related equipment in the space. Over the next few years, Garrison Printing came to lease the entire property and stayed there until 1997. On July 29th of that year, the old Bird Building was purchased by a group called the S & H Pang Partnership for $305,000. They converted the first three floors into a daycare called the Chinatown Learning Center that still operates to this day. In the Summer of 2001, a mural was painted on the Bird Building’s eastern party wall by Jane Locke and Tomie Arai called “A Thousand Children Playing”.

In August 2012, the Bird Building sold for $254,080 to a new owner simply known as Spring Street Operating LLC. After spending nearly two decades underutilized down to the first three floors, perhaps they will bring the 113-year-old subtle beauty back to life, inspiring Chinatown’s side street pedestrian travelers.