With Pedestrian Improvements Starting Today, Can Mass Transit Be A Possibility For Boulevard? 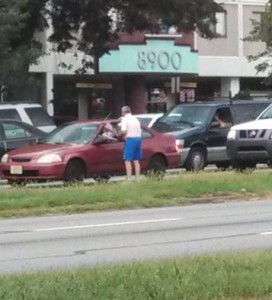 With each hand clutching flower bouquets, a 66-year old Ukrainian man weaves through southbound traffic on Roosevelt Boulevard at Woodward Street (immediately north of Pennypack Park). In between flower sales and traffic-weaving, the vendor picks up empty chip bags, soda cans, and the like from the grassy median, accruing a convenience store bag of trash by 6pm. I ask him about the recent accident on the Boulevard, which involved the death of a family of four, and whether he feels safe selling merchandise on the highway’s median. He sternly and quickly responds, “yes, absolutely.”

He is so confident, in fact, that he demonstrates his traffic-zigzagging tactics. “I am always in control, see?” As he says this, he faces rush hour traffic, his back against the bumper of the car behind him, making eye contact with drivers the whole time. The median vendor has not had a close call with a vehicle in the six years he’s been working here.

Not all users of the Boulevard are so lucky, however.

Roosevelt Boulevard is a 12-lane wide, 12-mile long federal highway (US Route 1, and briefly, US Route 13) carrying 100,000 cars daily through or alongside half of Philadelphia’s planning districts. According to PennDOT, 3,000 auto accidents, which include at least 55 deaths, occurred on the Boulevard in the past five years. These accidents involved 133 pedestrians, 17 of whom were killed. 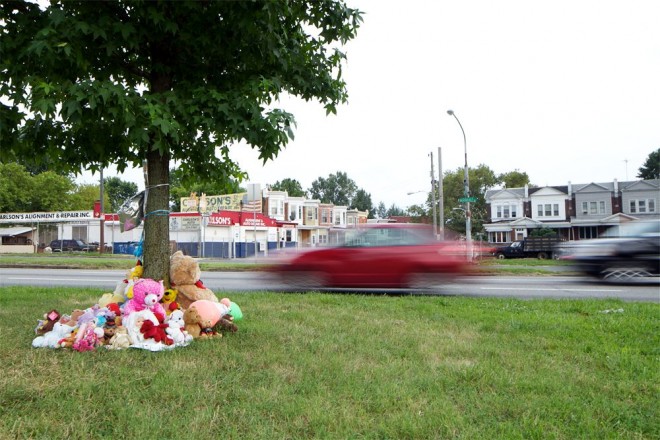 The variety and complexity of activities and users along the highway present a dilemma for safe passage and design improvement. Residents and commuters use a myriad of transportation options, including buses, bikes, cars, and walking. Row homes, shopping centers, and even parks like Pennypack and Benjamin Rush line the edges of the road where sidewalks might be. While this mixed use makes it the unique and thriving commercial and city-suburban commuting backbone of the Northeast, the current layout fails almost completely to accommodate non-car transportation.

The death of the Banks family near the intersection of 2nd Street and the Boulevard triggered a quick response from the Streets Department and PennDOT. Less than a week after the accident, Cantor says department officials began a study to evaluate whether a signaled pedestrian crossing should be constructed between Mascher and 4th Streets. She adds, however, that if pedestrian signals aren’t justified they may instead install pedestrian barriers. 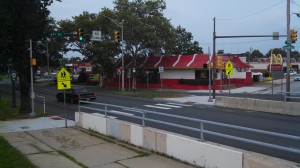 Cantor points out that final decisions for this intersection “will establish precedent for the entire corridor.” This could mean a more stabilized model for future pedestrian safety measures.

Until then, all crosswalks and reflective pavement markings along the entire highway will be widened, made more reflective, and completely redone by the end of this week. “No Crossing” signs will be installed today at 2nd Street and the old pedestrian concrete path will be removed. Ongoing considerations for similar safety improvements for other intersections will be conducted.

These unplanned and low-cost improvements coincide well with a larger study being undertaken by the Delaware Valley Regional Planning Commission likely to be completed in December 2014. The DVRPC report will aim to bring smarter and more competitive transit options to Philadelphia and its surrounding county commuters along the Boulevard. While it will not address pedestrian safety per se, the plan can work in conjunction with ongoing initiatives to create safer crosswalks and better pedestrian signage. Advocates hope that certain elements of the DVRPC plan will advance quickly. 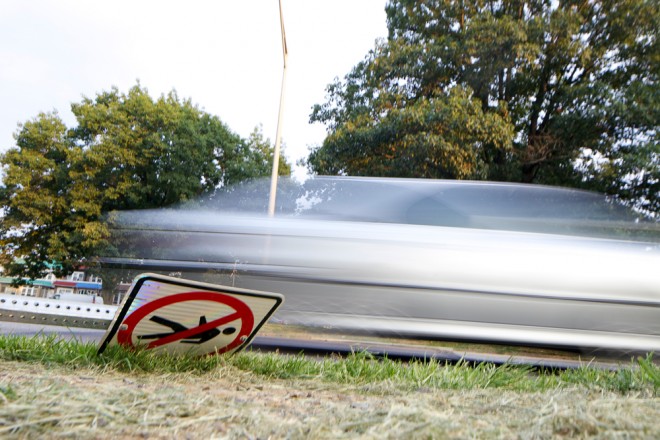 According to Gregory Krykewycz, manager of the DVRPC office of Transit, Bicycle, and Pedestrian Planning, there are four categories of transit options for the Boulevard. The first is low-cost, high-impact improvements for existing bus services. The second is a Bus Rapid Transit-lite system, with “specially branded stops that communicate it’s different from regular bus services, a little bit faster, and doesn’t stop as frequently.” The third is “higher quality, more pure Bus Rapid Transit,” where buses have right of way, have higher end stations and vehicles, and give the impression that sections of the Boulevard are like “rail on tires.”

The last option being explored is street level rail, which would encompass everything in option three, “but on tracks instead of tires,” keeping public transportation separate from vehicular traffic.

Krykewycz says the Los Angeles Orange Line, Trolley Orange Street Stop in Media, PA, Subway-Surface Trolley in West Philadelphia, and the River Line in New Jersey are examples of similar systems. Of course, he says, due to the complexity and uniqueness of the highway, the system would “look and act differently and make sense for our region and city.” 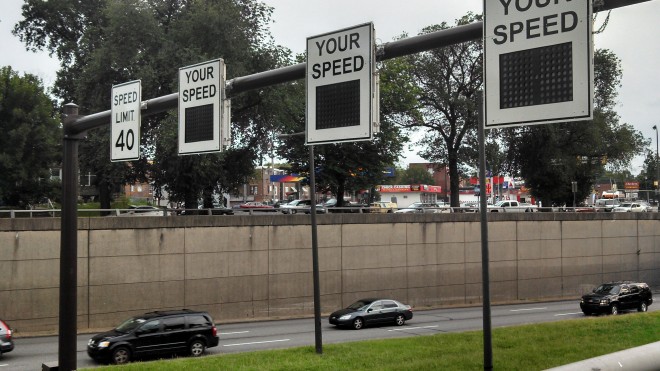 After research is completed, DVRPC will brainstorm non-heavy rail options with residents and partners such as the Mayor’s Office of Transportation and Utilities, Streets Department, Philadelphia City Planning Commission, SEPTA, and others as needed. Krykewycz’s team will then sift through the best ideas (by next winter), keeping in touch with partners as a “sanity check” to ensure plausibility of recommendations for all county residents and stakeholders involved.

“A plan like this one wouldn’t get formally adopted; it’s a feasibility study,” he says. Rather, the plan would be implemented in piecemeal; it all depends on the funds available and what the competition looks like from other agencies and project priorities, he adds. 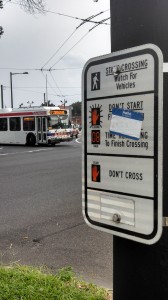 The Boulevard is taken advantage of by bus riders and pedestrians in addition to drivers | Photo: Angela Taurino

There appears to be strong public support for mass transit along the Boulevard. In a frequently cited text-based survey conducted by the Planning Commission and Textizen, 96.8 percent of nearly 600 commuters responded affirmatively to the question, “Would you take rapid transit along the Boulevard to get to Center City?” But such conversations have buzzed since the beginning of the Boulevard’s history. “Improvements have been planned and wanted for over a hundred years without anything happening,” says Krykewycz.

Dreams of heavy rail for the Northeast first evolved during the highway’s construction in 1903, when Philadelphia’s Transit Commissioner A. Merritt Taylor proposed rapid transit in the form of an elevated rail line above the Boulevard’s median. (PhillyRoads.com.) The goal for Philadelphia’s Common Council was the same then as it is now for DVRPC, although its direction has since changed; instead of connecting Center City residents with Northeast development, recent plans and studies have sought to bring Northeast residents to Center City. Taylor’s plans, of course, never materialized.

Later in the Boulevard’s history, dreams for mass transit were almost realized. A subway station at Adams Avenue was constructed in 1967 as an extension to the Broad Street Line; it would become the transportation hub of the Northeast. Due to financial and political pressures, it was never completed and instead the Broad Street Line was extended to Pattison Avenue. While it was probably destroyed during the 1994 implosion of 74-year old Sears building, the subway station may still exist underground.

As a highway, however, the Boulevard has had its desired effect, but not without consequences. The highway’s construction in 1914 led to development along its spine, obliterating the small communities and truck farms unpaved roads. Later in 1961, the extension to I-76 and Hunting Park Avenue furthered the highway’s popularity, but of course increased traffic. The city responded by widening the lanes, which, predictably, only exacerbated congestion–and simultaneously created more issues for pedestrians. 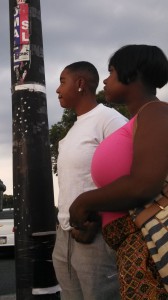 Daysha and Nya wait for the 14 bus on Grant and the Boulevard. Normally they would drive, but due to a driver running a red light at Cottman Avenue, Nya’s car is totaled. It will take Nya 3.5 hours to get to school using SEPTA. Normally it takes twenty minutes on I-95 | Photo: Angela Taurino

The failures of past mass transit efforts don’t phase Krykewycz. A strong network of partners, resident outreach, and thorough research will hopefully create a foundation for a solid plan, he says. Through close consideration of previous efforts, such as DVRPC’s 2007 US 1-Roosevelt Boulevard Study and the City’s more recent Lower Northeast District Plan, DVRPC is careful to not reinvent the heavy-rail-wheel; a wheel which has been doing a burn-out since 1903.

There are, however, some challenges with the Boulevard today that were not issues back then. As many have noticed, I-95 is undergoing major construction, disruptive construction which will continue until 2016. DVRPC needs to stimulate transit without taking away the Boulevard’s ability to mitigate traffic from I-95.

Equally difficult is balancing transit’s need to be time-competitive, easy to implement, and according to DVRPC, “leverage stops and stations for their economic and community development potential.”

What can an underfunded city do to stimulate and regulate one of its busiest, most lucrative, and infamously dangerous corridors? So far, the answer has been short-term responses to tragedies and long-term visions without the funds to support them. With the upcoming DVRPC plan, short-term elements could layer well with more costly and longer-term pieces over time. If the recommendations are implemented as Krykewycz envisions, Roosevelt Boulevard could have a transit system that bridges Philadelphia and Bucks County, and that accommodates a variety of transit options–what healthy, urban places need.