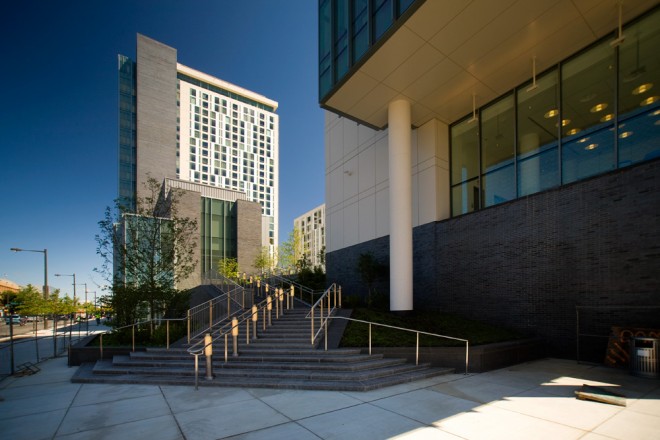 Step up to the next level of Temple University | Photo: Bradley Maule

There are few streets in Philadelphia so thick with pedestrians as Liacouras Walk on Temple University’s campus. On any given day of the academic term, the tide of students rises up on Liacouras and pushes out along the other campus walkways and the city streets around. Starting Monday, with the opening of the massive student residence complex Mitchell and Hilarie Morgan Hall, the Liacouras tide will carry students, faculty, staff, neighbors, and visitors up a slight grade and into a brilliantly imagined public courtyard terrace that quite literally elevates the experience of Temple’s campus. 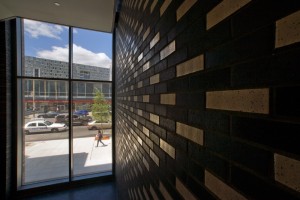 The $216 million project, designed by the Philadelphia firm MGA Partners, is an unmistakable departure from Temple’s commuter school character. Morgan Hall will house some 1,275 students, a student activities center, a retail food court with seating for 700, and an anchor restaurant in three distinct buildings of multiple heights including a 27-story, 312′ tower, the tallest in North Philadelphia. The elevated public courtyard, which so seamlessly ties all the elements of the complex together, is a product of the landscape firm OLIN Studio.

A successful building is probably expected to make some money for the owner; it should be capable of serving private functions, meeting personal needs. It is otherwise quickly forgotten by everyone else. At best, perhaps, it doesn’t offend; it doesn’t work in opposition to the public good.

This project is likely to fulfill those narrow private ends. Despite the $170,000 per bed price tag, Morgan Hall is a strong economic bet for a university seeking to upgrade the student experience and a factor in the algebra of university finance. Positive collegiate memories forged through an active and engaging campus life lead to strong alumni giving—such as the $5 million donation from 1980 alumnus Mitch Morgan, for whom, along with his wife Hilarie, the buildings are named.

The complex is also meant to keep students on campus and out of the neighborhood, a move meant to help ameliorate Temple’s long painful relationship with North Philadelphia neighborhood groups. “The neighbors have definitely been clear that they want their neighborhood,” says university architect Margaret Carney. “But the other driver is the impact on the student experience. Kids who have the opportunity to live on campus have a higher success rate academically. And it adds a lot of vibrancy to the campus.” 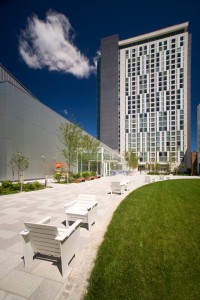 Part of Carney’s charge as Temple’s first campus architect is to raise the quality of the campus public sphere. This means creating inviting social spaces for students, installing well built, attractive, and contemporary street furnishings, and establishing a progressive and exciting architectural language for what has been for decades a hard and harsh place to go to school. With careful attention to design detail, high quality furnishings inside and out (including top of the line furniture mostly built in Pennsylvania by Knoll), Morgan Hall is the first substantial evidence of the new standards, a take-off point, says Carney, that will be further proven out by the science building now under construction, and a new main library, to be designed by the much lauded firm Snøhetta.

But a great building, of course, does much more than meet the private needs of the owner. It performs multiple, intricate functions all at once. It endures and grows in our imaginations; it fixes itself as a kind of landmark on the urban landscape. It contributes to wider societal goods and goals. Morgan Hall is indeed such a building.

Temple, says Carney, “did not shy away from the role a campus should play on Broad Street, the most important street in the city of Philadelphia. This is the right thing to do in this place in the city.” Continuing Temple’s attempt to engage with Broad Street that began in earnest with the residential and retail project Avenue North, Morgan Hall brings high density and pedestrian life to the corner of Broad and Cecil B. Moore. The glass, charcoal brick, and insulated aluminum tower stands on this corner, directly on top of the Cecil B. Moore Broad Street Subway station. MGA situated a two story public food court (the building is three stories with a flex/event space at the top)–with a diner, Tony Luke’s, and a 24 hour cafe among other fast food–along Broad Street, with entrances at each end of the building.

The long wall of the commercial building fronting Broad is a monolith of dark glass–the only sour note in the entire project–that doesn’t appear inviting to the pedestrian. Installing a third street entrance in the middle of the block would probably fix that problem. Carney says the idea is being discussed. But she also notes that a significant landscape installation as part of the larger reimagining and relighting of North Broad, is in the works. 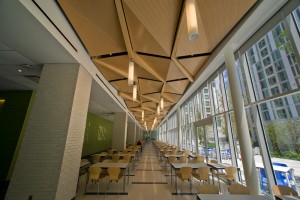 While the retail is accessible to the street, the project’s designers are hopeful that people will use the monumental public staircase at Broad and Oxford and the Liacouras Walk ramp at the other end and enter the complex through the terrace, with its oval lawn, and plentiful outdoor seating, the first exterior dining opportunity on campus. Inside the food court, MGA has subtly split the space linearly between a somewhat more student-focused dining (and perhaps study) area and the main dining room. The student space is capped with the same beautiful wooden origami-like ceiling that winds throughout the entire complex and that lends the feeling of both calm and excitement.

The creation of the raised terrace allowed the designers to put 70 parking spaces, bike racks, a loading dock, and other mechanical outfitting below. The benefit of an elevated plaza, MGA senior partner Dan Kelley indicates, gives the complex an unbroken perimeter at the street level, without driveways, further activating the connection to the city beyond. It also creates viewpoints out to Broad Street and back to campus. One of the effects of this, by framing the other buildings around, is to improve the way they appear.

But the best views, certainly, are from the residence tower, known as Morgan Hall North, open to upperclassmen. 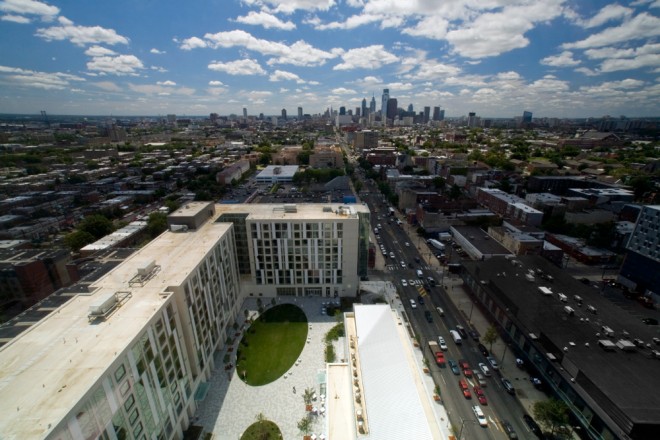 The four person suites have tall windows that make the city constantly present. “If you were a student coming to Philly,” says Carney, “wouldn’t it be awesome to live right there?”

The city is in fact everywhere: glimpse the corner of Broad and Cecil B. Moore in the stairwell of the retail building; note the forest of West Philadelphia as you pass by the two-story, fully-glassed common social spaces that cap the end of each hallway; catch the city panorama from the top floor banquet rooms, the Betsy Ross and the Commodore Barry bridges in one view.

Much of what is so remarkable about this project is in the detailing. The pattern of the composite pavers of the terrace plays along with the window pattern on the tower and the ten story L-shaped Morgan Hall South, a residence for freshman and sophomores. The variegated gray palette allows glimpses of color, like the indigo of the chairs in the terrace, and the Mediterranean green of the cedar trees planted around the grass oval, to pop. The multiple building heights give the entire complex the impression not of a single installation built all at once, but of a place, like the city itself, that’s formed in slow accretion over time.

The tower, with the yet unsigned anchor restaurant on Cecil B. Moore, is likely to garner the most attention for its height and changeability. It can be flat, sleek, slender depending on your view point. Architecturally, it has the presence of a midtown apartment building. It’s muscular and also forward thinking, tall and certain about Temple–and the city’s–future.

Ed. note: This story originally misidentified Liacouras Walk as nearby Polett Walk; this has been fixed.

To view Brad Maule’s Morgan Hall gallery, click any of the photos below.