Tales Of A Privy Pirate 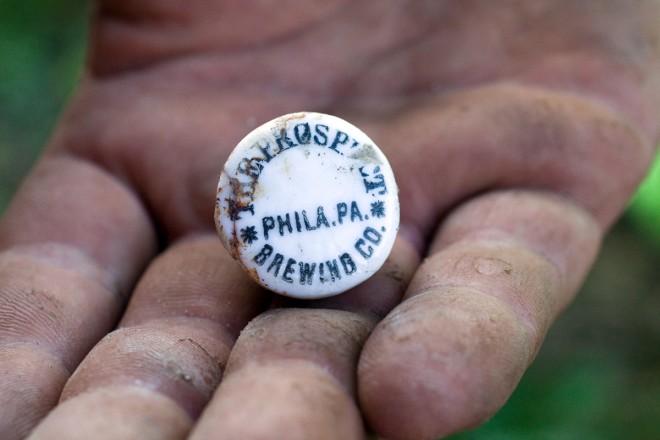 Editor’s Note: Privy digging by non-archaeologists got started as a pastime in the 1970s, and like so many subcultures has gotten a recent boost from the Internet. Called “Privy Pirates” or “Diggers,” these history enthusiasts unearth interesting and suggestive items in people’s backyards. There are probably about 20 diggers working in and around Philadelphia, often as teams to split up the shoveling. The work they do is difficult and dirty and much of it follows from personal passion rather than the public interest. A significant proportion of what they find are glass bottles from the 1800s, the vast majority worth under $20, but a precious few worth far more than that. Digging, however is controversial; trained archeologists say that diggers are wrecking potential archeological sites and serving personal interest rather than the collective understanding of the past. The context of where an object is found tells us far more about 18th and 19th century life in Philadelphia than the object itself–and that context is lost once an object is unearthed by a digger. Yet real estate development, particularly in the richly inhabited areas along the Delaware waterfront, may be a far larger threat to Philadelphia’s archaeological record  With all this in mind, we recently caught up with “Digger George” Mathes, one of the top diggers in Philadelphia.

John Vidumsky: Is digging more of a business or a hobby?
George Mathes: It’s more of a hobby, going out and digging. Everything is archaeology, treasure hunting. I think it’s the coolest subject in the world, because you know where you came from. It’s a passion. I’ll never stop.

JV: What do you find?
GM: Around here in Philly its mostly antique bottles and pottery. Coins, stuff like that. I also look for ancient artifacts up and down the Delaware river.

JV: But you do most of your digging in old outhouse pits?
GM: Privy pits. Every house before plumbing had an outhouse. I go in the backyards and locate them and excavate them. A lot of times they’re empty, because there was a law back then to clean them out. But when you hit a full one, that makes up for all the empty ones. You get a lot of cool pieces of history from the neighborhoods. The older ones (privies) have wood-lined pits, newer ones have brick. Stone too, I’ve seen.

JV: Is any of the wood still there?
GM: Yeah, if you get a wet soil it preserves it. I’ve hit ones where you could pull the wood out and build with it today. In the bottom of the privy, if it’s still wet, you’ll find leather and wood. Organic materials that didn’t decompose. I found really unusual stuff like violins and whips and shoes. I found a silk top hat once. The shoes I found were really interesting. People used to decorate their shoes, they had incised decoration with flowers and leaves. Women’s shoes and men’s shoes both. I’ve dug shoes from 1800 to 1840. Complete eggs that have not deteriorated. The smell down there is just indescribable, it’s the smell of methane. Sometimes there’s so much methane down there that it gets you high. And you find fingernail clippings. Clumps of human hair. It’s an eerie feeling. If you get underground, you’re going to find more than you can imagine.

JV: What’s the most surprising thing you’ve ever found?
GM: When I’ve been out looking for bottles at construction sites, I’ve noticed some graveyards. I’ve found human bones all over the place. Whole cemeteries. It’s going to happen, because history is on top of history. Some things weren’t documented, and people didn’t know they were there. 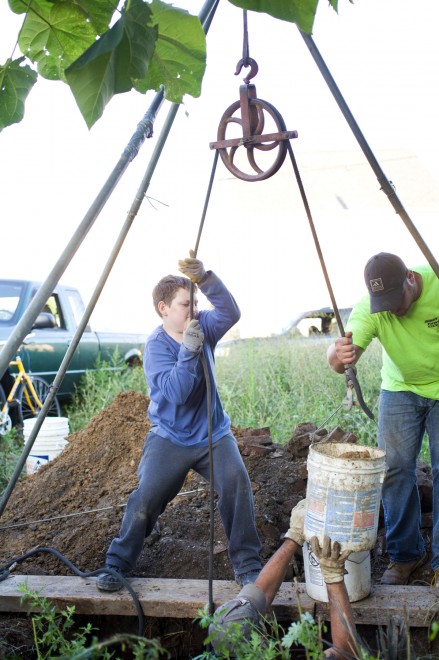 JV: How far down do you dig?
GM: The deepest I’ve dug was 40 feet, at 20th and Fitzwater street in South Philly. It was a privy used by a church. We gave up because it became too dangerous, there were bricks falling in. It was nighttime and nobody had enough lights.

JV: How many diggers are there nationwide?
GM: There’s hundreds of people all over the country that do this. In the Philly area there’s only about a dozen. There’s guys in New York City and Baltimore, and we all get together and dig in each city. But in each of those cities, there’s only about a dozen diggers. They all have the passion, because that’s what it takes. You have to, or you’re not going to want to do it.

JV: How do you divide up the “loot?”
GM: Sometimes according to value, sometimes we flip coins, sometimes somebody will buy somebody out. A lot of greed though, that gets involved.

JV: Because they think of it as treasure hunting?
GM: Yeah, some of this stuff is worth a lot of money. There’s times when we won’t talk for a few years, but eventually we’ll start talking.

JV: How profitable is digging?
GM: Digging might be the most money-draining activity in the world if you’re not finding anything. Money and time. I’ve dug ten pits in a row in Philly without finding anything. If you don’t have some kind of backup income, you’re not going to make it. But when you find something good and you sell it, it’s worth all the time that you didn’t find anything.

JV: Where do you sell the things you dig up?
GM: So far all I do are Craigslist, Ebay and flea markets. At flea markets I’ll bring a whole truckload of stuff and lay it out, a lot of people pick through it and I’ll sell everything. I also take things to auction houses.

JV: How much does a typical bottle sell for?
GM: There’s more bottles out there worth a dollar than anything.

JV: What’s the most valuable thing you’ve ever found?
GM: I found a $12,000 bottle before. It was worth $12,000 until I put it on ebay and said that it came from an old collection. As a result, it only went for $4000. I learned a lesson that day. Because I didn’t say it was recently dug, everyone thought it was a fake bottle. So you have to be honest. I just dug up a stoneware pitcher at Second and Spring Garden. It’s signed on the base “J.F.” and it’s attributed to a famous potter. It’s going to be auctioned in March, and it could go for $4-6,000. I got permission to dig there, so it’s perfectly legal. Always get permission.

JV: How do you get permission?
GM: You have to talk to people and tell them exactly what you want to do. We’ve gotten a lot of permission just knocking on doors and talking to people. You usually have to offer them something that you found. I’ve done a lot of abandoned houses without permission, and I’m always on edge about that. I’ve always gotten away with that, though. A lot of times they (property owners) see how hard you work, and they don’t even care. They’re just happy that somebody’s doing something constructive with it. But if you do that, always fill the hole in.

JV: If you don’t get permission, what kind of crime could you be charged with?
GM: A buddy told me I could dig at 5th and Green streets, there’s a parking lot there. An hour later, we’re in handcuffs. I got charged with vandalism because I opened a little hole in the parking lot. But we only got 24 hours of community service.

JV: Have you ever been injured while doing this?
GM: Not really. I’ve had my life saved, though. Once a boulder was falling into the privy, sixty or seventy pounds. But someone caught it. I was down twenty feet and I didn’t have a hard hat on. That would have done me in. Since that day I’ve always worn a hard hat. Some of my friends have walked over privies that just had a thin layer of concrete over them, and they fell through, dropped down twenty feet. Nobody’s died, though, that’s what matters.

JV: What kind of equipment do you need?
GM: At minimum, you need to have a car, a D-handle shovel and a metal probe. The probe is a spring-steel rod, you get them out of the trunks of cars, mostly. That’s how you locate. You stick it in the ground and use it like a knife. You find the walls, you find easy soil to probe. That’s usually a good place to dig, because natural clay and dirt is hard. You can have twelve guys on a dig, and there’s something to do for everybody. You’ve got to have somebody sift the dirt for artifacts in case you missed anything in the hole. But if you don’t have enough people on the dig you can’t do that. A lot of times if you’re digging on a site that’s going to be destroyed the next day, you don’t have time to sift. You just have to grab what you can and get out. Sometimes you only have a few hours, and you have to break stuff, you have to hustle to get it in and out. But if you didn’t do that, nothing would be saved. 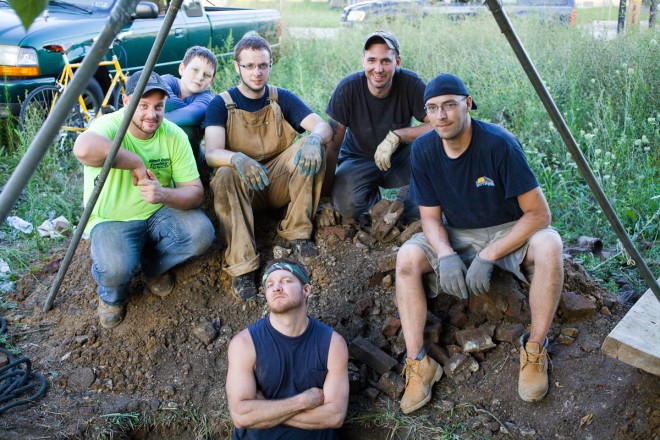 JV: So you see this more as a salvage operation?
GM: Somebody’s got to do this. Archaeology is continuous. One hundred years from now people will find our stuff. I don’t see a problem with it so long as whatever you find, you get out there to the world. We (diggers often) don’t like people to know where we’re digging or what we’re finding. I don’t think that’s a good idea. We don’t need to tell them right away, but we should tell them at some point. You have to tell people about it. Tell the truth about what you find. It’s okay if you sell the artifacts, because you’re still getting it out there. You put the time and energy into it, you deserve to get something out of it.

JV: But some diggers prefer to keep it secret.
GM: Yes. Everyone has their own ideas. Some don’t like to tell anybody anything. I think that’s wrong. It’s selfish. If you’re uncovering history, get that history out to the world. Don’t keep it to yourself. Just have fun, get out there and dig as much as you can. It’s what keeps me going in life.