Painfully Ugly, But Does It Matter? 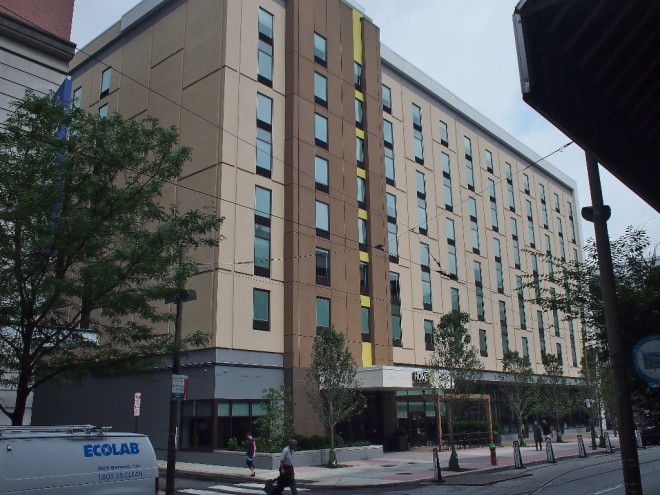 It’s funny and also sometimes exasperating to watch corporate and government officials go to great lengths–in silly, fear inflected corporate speak–to “control the message.” Our staff writer Christopher Mote’s interview earlier this week with Checkers corporate officials is case in point. Christopher might as well have been granted an interview with the high vice commissioner to the lord sultan of Hamburgler so shrouded was the whole exchange in officialistic and self-important bumbledom. And what he was to discuss with the high vice commissioner was no less subject to the official list of discussable items, inscribed in triplicate, and stamped in ketchup red by the lord sultan himself.

So it goes, I suppose, throughout the carefully tightlipped hospitality industry. I went over this morning to Philadelphia’s newest hotel, the 248 room Home2 Suites at Twelfth and Arch Streets across from the Pennsylvania Convention Center, indeed to try to figure out if it mattered that the hotel was painfully ugly–an architectural dunghill on what might have been a transformative corner. A project like this one is in fact filled with constraints, sometimes conflicting goals, and various stakeholders with various needs. There is sometimes little an architect can do. 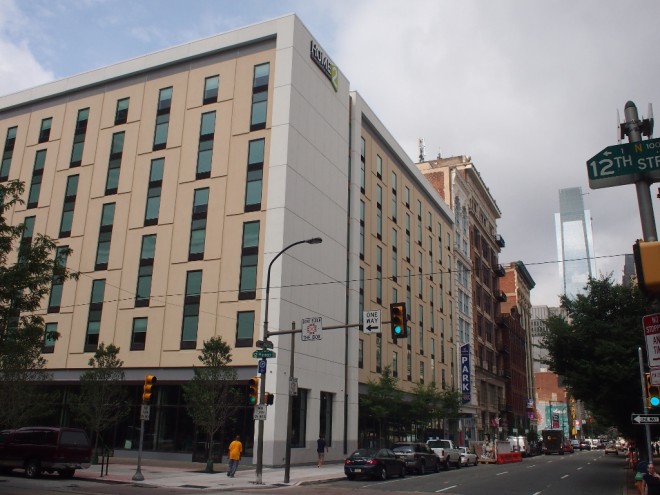 The $60 million hotel was propelled forward by more than $10 million in public financing; its construction had to allow for union wages, Hilton Home2 Suites long scroll of corporate brand requirements and specifications, a fairly tight parcel on a busy corner, and the post-industrial, post-gritty context of the old tenderloin. Some of the public funding stipulated that it had to be “green,” and as such it was given a green roof and furniture made of old Coke bottles and such.

Wisely, City officials insisted the hotel also had to be mixed use–that is, it would have a legitimate retail component, a wide and inviting sidewalk for tables, and large street-facing windows.

So I went inside. I had my camera on me and I began to take a photo of the large historic city map in the faux sophisticated lobby. No sorry, you can’t take photos in here, said a security guard (not obviously a concierge or a bell-hop). There was only one other person in the lobby–another security guard. Unless you’re press, he said. OK, I said, I am press, but I forgot to bring my card with me. Sorry, you’ll have to speak to the manager, we can’t just let anyone in here taking photographs.

But this is a hotel, said I. (Lot’s of people take photos in hotels.)

Have you heard we’re living in the age of terrorism, said he.

What does that have to–

Wait a minute, isn’t this a hotel? A welcoming place? You’ll have to speak with the general manager. We only take press through if it’s been arranged in advanced–the owners want to control what’s written.

Yes, I’m certain they do.

And I returned to my earlier question. Is the urban design good enough to make up for the suburban parking lot format? For the stucco panels? For the insistent dun? 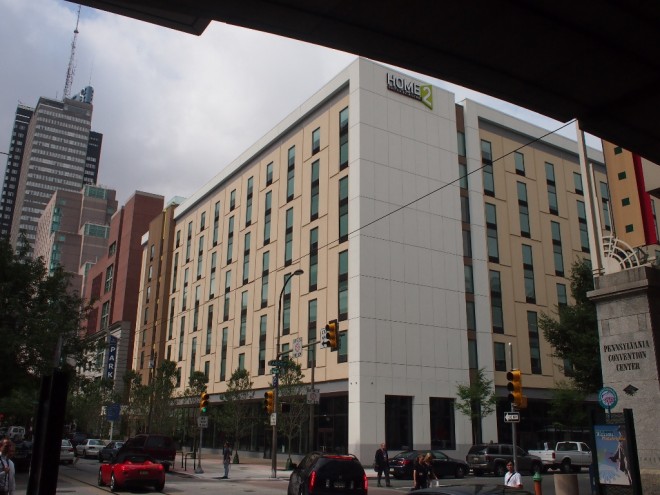 No, because the urbanism is terrible. The corner of Twelfth and Arch is given over a massive white windowless monolithic wall. A wall of defense and fear. The hotel’s entrance is too small, the glass windows of the stores–among them suburban zenith Panera Bread–are dark and foreboding.

And all this makes the architecture seem even cheaper, even uglier than I imagined it would. (Stucco is a peasant material–it has no place on this corner.)

I’m sorry the owner of the hotel Jake Wurzak hasn’t called me as I was told he would. He would have described the stylish interior meant to pander to the tastes of the sexy, cosmopolitan weekenders the hotel says it wants to attract. Perhaps he would have invited me in–a new hotel, go figure–to show off the rooms with their automatic switches that turn of the lights when no one is there. I’d have to tell him I’ve already seen enough.