One Riverside, One Classic Skyline View 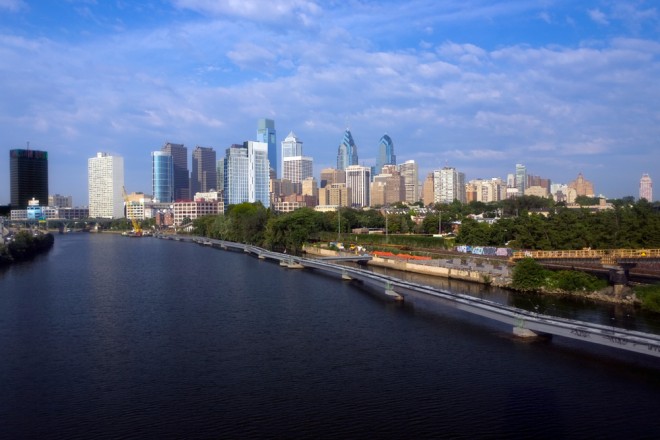 With new details released in an application last week to the Philadelphia City Planning Commission’s civic design review committee by Dranoff Properties, one question of mine regarding their One Riverside proposal was satisfied: what will it look like from the South Street Bridge?

While there are a number of publicly accessible signature skyline views—those from the Camden riverfront, Belmont Plateau, and the top of the Art Museum steps come to mind—none of them match the immediate wow factor South Street Bridge provides. There’s a reason they rebuilt the lookout turrets on the replacement bridge.

At 20 stories and 148′, One Riverside is no small building, as many observed at the Center City Residents Association meeting about it two weeks ago. CCRA even voted to oppose the project, despite it fitting within the much maligned and famously reformed zoning code, by right. In the application, it appears to double the height of Locust on the Park, the eight-story building also owned by Dranoff just across the street, opened in 1911 as the Lanston Monotype Machine Company’s factory.

In her column on Friday, Inga Saffron (who has a vested interest in the tower’s design, as she owns a plot in the community garden next door) offered six excellent suggestions for improving One Riverside. I’d offer one more: consider the impact on the skyline. 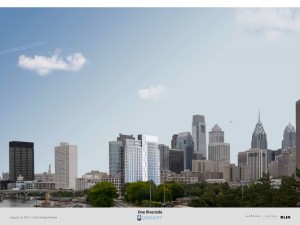 One Riverside rendering by Dranoff Properties and Cecil Baker + Partners

To a certain extent, it seems Dranoff and Cecil Baker + Partners have. The application includes a list of the building’s responsibilities, and the first one is “responsibility for view shed and permeability.” It also includes a South Street Bridge view rendering.

As Inga mentioned, the beloved Schuylkill River Park “deserves an exceptional building as its neighbor.” So too does the South Street Bridge skyline view. As currently proposed, One Riverside is not bad, but it’s not exceptional either. The balconies facing the river are sharp, and whichever material they go with for the southern façade will likely succeed as a result of the discussion thus far, but the building’s massing remains plain.

With a triangular property site, there’s potential for a more interesting shape. When the Schuylkill Banks boardwalk is completed, it’s going to be one of the most progressive pieces of civic infrastructure Philadelphia has seen. On a sunny summer day, when hundreds of people are biking, jogging, or just enjoying a stroll, the boardwalk will form an amazing component from the classic South Street Bridge view. As a harbinger of riverfront development and progressive architecture, One Riverside needs to do that, too. It’s getting there.

The Planning Commission’s civic design review committee will consider One Riverside at its September 3 meeting.