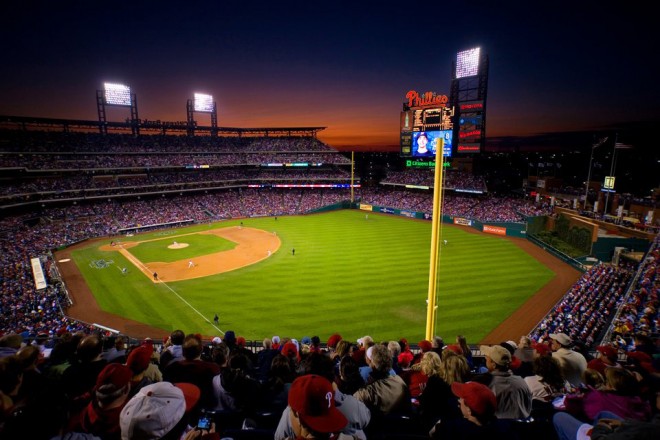 When Mayor John Street announced that the new Phillies and Eagles stadiums would be built on swaths of land opposite one another on Pattison Avenue in South Philadelphia, no one shed any tears for the closing of The Vet. But after so vigorous a debate as to where to locate the Phillies’ ballpark, settling on another spot at the Sports Complex seemed like such a copout. Now in its tenth year, Citizens Bank Park—like the Phillies team calling it home—has earned mixed reviews, but mostly positive.

In the buildup to the November 2000 announcement, the Phillies and the City considered a number of close-in locations following the model of Baltimore’s Oriole Park at Camden Yards—the one that changed the model of new baseball stadiums. The former Schmidt’s Brewery site at 2nd & Girard. The former trash incinerator site on the Delaware Riverfront at Spring Garden. The post office land at 30th & Walnut that would have answered Pittsburgh’s PNC Park with a skyline-in-the-outfield, walk-to-the-game experience. (Penn loudly opposed this plan—and eventually consumed it for their own Penn Park.) And most famously, Mayor Street’s red herring in Chinatown. 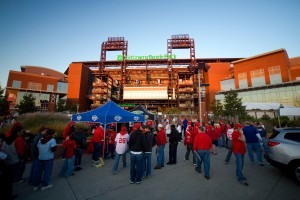 Instead of something innovative like any of the above, Philly got its new “neighborhood ballpark” in the middle of not a neighborhood, only a sea of asphalt. Because of this, EwingCole’s reserved brickwork design, which USA Today described this year as “similar in color and texture to colonial buildings near Center City,” comes off as disingenuous. Worse, you don’t have to look too closely to see the prefabricated paneling of the faux masonry. And to reach the big brick house from the subway, one’s four block walk is interrupted twice by parking lot entrance curb cuts that could have been installed off of Broad Street or Hartranft Street.

In fairness, a baseball stadium in a downtown as vibrant as Philadelphia’s doesn’t make fiscal sense. Center City real estate is too valuable for a massive venue that’s only populated 81 days a year, up to 11 more on the best of years. Besides, once you’re inside Citizens Bank Park, you don’t think about any of this.

There’s a reason three million people turn the stiles every year, and while it certainly begins with this (fading) golden era of Phillies baseball, it’s more than that. The experience includes unmatched sightlines; wide concourses and standing room areas on both the upper and lower levels, and again above the outfield seats and bullpens, leave gameplay unobstructed throughout the ballpark. And the views toward the parking lot/oil refinery sunset and distant skyline, “Theme Tower” be damned, are pretty spectacular. 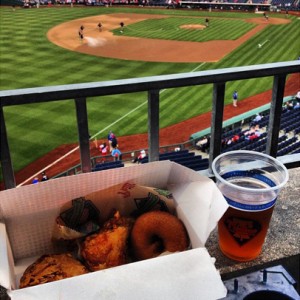 The concessions are tops in baseball, too. Bull’s BBQ is the sort of standard fare modern ballparks come with, but no tongue would ever curse his dry rubbed pit beef. The Schmitter, Tony Luke’s roast pork sandwiches, and Federal Donuts’ fried chicken all provide local bona fides far surpassing bland offerings from Aramark (even if Aramark is technically local). Beyond the carnivorous, PETA has named Citizens Bank Park the most vegetarian-friendly ballpark in North America multiple times.

Likewise, the craft beers on tap show the interest the Phillies have in supporting local businesses; the thirsty have a very short walk to a cold Sly Fox, Flying Fish, Tröegs, Yards, Philadelphia Brewing Company, or Dogfish Head beverage. The love is reciprocated no better, however, than by Victory Brewing Company. Their Hop Devil IPA and Headwaters Pale Ale are available at several Brewerytown stations, still more carry their Prima Pils and Summer Love, and as of 2013, Alley Brewing Company (on the former site of Chickie’s & Pete’s, which moved just down Ashburn Alley) carries their Alley Lager, brewed exclusively for Citizens Bank Park.

Victory’s presence at the ballpark spills across the street to the Victory Beer Hall, the premier venue in the otherwise lackluster Xfinity Live! (Exclamation point theirs.) Besides that schlocky facility, no other development has come about at Broad & Pattison from two new stadiums in ten years (three in the past 17). No new hotels, no new restaurants or stores, nothing that gives anyone a reason to come early or stay late. It’s a significant disappointment for a $458 million ballpark ($174M public) that was to be a catalyst for ancillary developments. 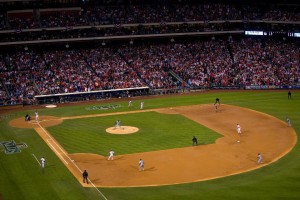 But if that’s the biggest disappointment, The Bank is hardly a failure. Phillies baseball ought to remain the gauge by which the ballpark is measured, and to that end, it’s pretty incredible to think that 2013 could be the first losing record the club has had inside their ten-year-old home. Five straight division crowns and playoff runs, a playoff no-hitter, a club record 102-win season, and the most incredible October night in 2008—these are how people remember the first ten years of Citizens Bank Park.

For every drunken fan who intentionally vomits on a little girl, there’s a dad who catches a foul ball and gives it to his daughter … who then throws it over the railing.